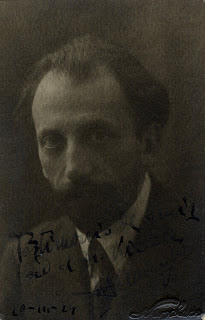 I'm still working on renaming files for many of the digital objects (photos, scans, museum artifact pictures, etc) that will make their way into the DRL. One picture that caught my attention was this rather dark portrait of Ignacio Barraquer. According to some Web research, Ignacio Barraquer was an ophthalmologist born in Barcelona, Spain where he received his Medical Doctorate in 1908. He was appointed Acting Professor of Ophthalmology at the School of Medicine and held this position until 1923. While he is famous for his contributions to the advancement of cataract surgery, he also founded the Centro de Ofthalmologia Barraquer.

The photograph dates from the early 20th century, most likely between 1910 and 1930.

Posted by Historical Collections and Archives Staff at 3:35 PM No comments:

In preparation for a recent outreach visit, I did some searching on the library's resources in the history of Islamic medicine.

Primary sources on this topic are rather thin on the ground in our rare book collections, which tend to have a traditionally Western focus. The Sydenham Collection includes a translation of A treatise on the small-pox and measles, by Abū Bakr Muḥammad ibn Zakarīyā Rāzī, (Rhazes).
The History of Medicine Collection includes The book of ten treatises on the eye by Ḥunayn ibn Isḥāq al-ʻIbādī (Johannitius), in edited Arabic text and English translation.

I was pleased to see that the library's main collection includes several more translations of primary sources from the Islamic Golden Age, including writings by Avicenna and al-Kindī, and Arabic versions of Galen and Hippocrates. The library also holds secondary resources on the history of Islamic medicine.