A Loss to our Community

Dr. Charles Grossman and Dr. Joy Spaulding, great friends of HC&A, both reported to me this week that Dr. Rudi Nussbaum passed away after a fall while on a trip to the Nussbaum's home country of Holland.

An article and a video of Dr. Nussbaum are posted here. The article reads: "Professor Nussbaum was an avowed pacifist and Holocaust survivor and an expert on the effects of radiation exposure. Longtime friend, Lloyd Marbet writes: 'his work as a Professor Emeritus of Physics and Environmental Science at Portland State University was instrumental in raising alarm over the health effects of radiation exposure. He wrote mumerous papers on this subject and participated in gathering valuable information on workers and civilians that were exposed to radiation at Hanford and in surrounding communities, for which he became a vocal advocate for environmental justice. He helped bring the famous epidemiologist, Alice Stewart, to Portland and promoted her life story."

Dr. Grossman, and Dr. Nussbaum were colleagues and worked together on projects related to the ill effects of radiation exposure and served with the organization, Physicians for Social Responsiblity, but they were also the best of friends. At Drs. Grossman and Spaulding's invitation, we (Maija and I) were seated at their table at the annual dinner of the Oregon chapter of the PSR this past spring. I was lucky enough to have found myself dining next to Dr. Nussbaum and his wife. I found them charming, energetic and eager to share their history.

It is true that the community and the world has lost a strong advocate for a nuclear weapons free world and he will sorely be missed but his legacy lives on.

If you would like to know more about PSR and would like to stand up (against nuclear armament) and be heard, this Sunday the PSR is hosting an event on the Portland Waterfront just north of the Saturday Market to commemorate the nuclear bombings of Hiroshima, Nagasaki and the nuclear disaster at Fukushima. There will be entertainment, guest speakers and origami workshops. And learn how you can become "1 More 4 Zero".

Oh, and by the way, just in case you're interested, we have the audio-tapes of Alice Stewart which Dr. Nussbaum and Alice donated directly and some very interesting related materials, as well.
Posted by Karen Peterson at 8:00 AM No comments: Links to this post

Our friends at the Oregon Encyclopedia are hosting a new public history series called "Stumptown Stories: Portland History and Legends." These free, informal presentations are held at the Rialto Poolroom and Bar in downtown Portland. We were thrilled to find out that our very own alumna Marie Equi will be the subject of an upcoming Stumptown Story. On August 23rd, historian Heather Mayer will present "'The Stormy Petrel of Portland': the story of Dr. Marie Equi," focusing on Equi's contributions to Portland's progressive-era political history. 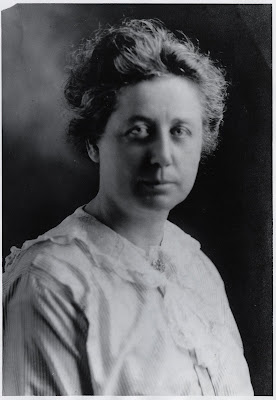 Above: Marie Equi, physician, suffragist, anarchist, circa 1930s.
Unfortunately, I'll be at the Society of American Archivists annual meeting and won't be able to attend. You should all go so you can tell me what I missed!
Posted by Maija at 1:39 PM No comments: Links to this post

The new exhibit from the Historical Collections & Archives is on display on the 3rd floor of BICC in the Library lobby on the OHSU Marquam Hill Campus. It's a perfect excuse to take a tram ride and view the city and surrounding areas, including the snowy peaks of the Cascades, from high above Portland.

The exhibit titled Architectural Renderings: From Neo-Classicism to Modernism, reveals in pen and ink the culmination of the dreams and aspirations of Kenneth A. J. Mackenzie, second Dean of the University of Oregon Medical School. What was intially given the derisive moniker, "Mackenzie's Folly", enveloped the optimism and hope of this one man: to build a world class medical education center perched high above Portland's busy city center.

The "Folly" is immortalize in the merged architectural styles represented in the extraordinary drawing by architect, Ellis F. Lawrence (1879-1946), et al. (see poster). Though quite different from Lawrence's original interpretation, Mackenzie's dream has come to fruition. From one small seed a great university has emerged.

For those who cannot travel to OHSU, the online version of the exhibit provides access to the brochure text; the architectural drawings can be viewed through the Artist's Gallery link.
Posted by Karen Peterson at 8:31 AM 1 comment: Links to this post