The Alumni Association of the Medical Department of the University of Oregon formed in 1913 when a group of 25 graduates and instructors met at a Portland hotel on June 13th. W. E. Smith would preside as President and our well known alumnus and perpetual friend of the UOMS historical collections, Adalbert G. Bettman, served as secretary. The organization, from that date onward, would be known as the Alumni Association, Medical School, University of Oregon.

We have, in the archives, the original minute book of said organization, which includes the constitution and by-laws and the records of a lot of other very interesting business.
The Association formed 98 years ago, almost to the date! We might think about celebrating the centennial of the organization when 2013 rolls around. It was in 1917 that the Willamette University Medical Department merged with the newly formed (and named) University of Oregon Medical School. Graduates from the Willamette school were inducted as members of the Association, as well as the graduates of UOMS.
Meetings were well attended and some of our more noted physicians signed their names to the rosters. We have the signatures of Belle Cooper Ferguson Rinehart, Marie Equi, Esther Pohl Lovejoy, J. P. Tamiesie, Kenneth A. J. Mackenzie, Richard B. Dillehunt, Ralph and Ray Matson, Emma Maki Wickstrom, Otis Akins, Robert C. Yenney, J. B. Bilderback, O. S. Binswanger... and that's to name just a few in a long list of influential luminaries.

Discussions ranged from formation of departments, curriculum, subscriptions for building programs and the requisite 5th year hospital residency. The President's address' to the alumni are lofty and hail the Alma Mater.
There is much to say about this large volume with its many pages of rosters, minutes, correspondence, reports, ephemera and journals. The binding is broken and the pages yellowed. But as you know, this post is about news clippings. So, I'll talk about news clippings.

Tucked into the February 18, 1922 report to the alumni is a small article that raised the ire of a lot of folks. It reported on February 20th that Dean John Straub of the University of Oregon spoke at the banquet for the effected Greek letter fraternity and sorority of the newly established Oregon State College of Chiropractic. Not only did he speak, but he praised the "high standard of the college and predicted a bright future... and complimented the exceptional faculty."

On February 23 the Alumni Association wrote a scathing retort to the Dean. It..."appeared in the news that you had been the guest of honor at a certain meeting of the chiropractors in this city. Upon reading this the following question came to mind:""What would Professor Straub think and say were the Dean of the Medical School to attend as a guest of honor a meeting of the followers of the Volivia celebrating the pronouncement that the earth is flat?"" Chiropracty stands in the same relation to scientific medicine as does the statement taught by Zion City's dictator to the facts. The Alumni Association, Medical School, University of Oregon has at all times actively supported all the other branches of the University but it asks no return support than this. We deserve your support solely because our work is based on scientific facts and the opposition is not so founded. The University should actively support scientific medicine. We hope the newspaper report is erroneous. A copy of this letter is being sent to the President of the University.

Very sincerely yours, Geo. A. Cathey
President; A. G. Bettman, Secretary."
Posted by Karen Peterson at 11:39 AM

Yesterday I picked up a donation of seven boxes of books and papers of Dr. Peter Taubenberger, a physician trained at University of Munich. In 1963, Dr. Taubenberger and his family emigrated to Canada. He spent most of the rest of his career in private practice in the western U.S., including towns in Montana, Colorado, and Oregon. He retired from practice in Portland in the 1990s, and passed away in 2010. Books were very important to Dr. Taubenberger and his family, and we are honored to have been chosen as the new home for these materials. 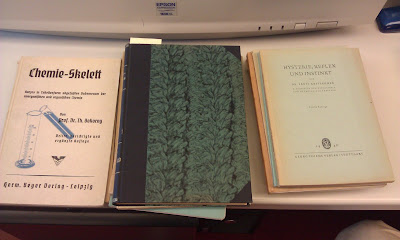 Most of the items in this collection are German-language books, journal issues, and offprints published in the early 20th century - see the tantalizing glimpse above. This morning Max finished unpacking and shelving the materials for review, and got started comparing titles to our holdings locally and in Summit. I noticed some interesting titles in medical technology, military medicine, public health and psychology and can't wait to dig in!
Posted by Maija at 1:46 PM