History of Ophthalmology - The Monographs

I'm very pleased to announce the acquisition of eleven volumes from Wayenborgh Publishing's History of Ophthalmology - The Monographs series. The books are a very thoughtful donation from Donald L. Blanchard, M.D.

Dr. Blanchard's gift consists of the first eleven volumes in this ongoing series:

Volume 5. John Jeffries. Lectures on Diseases of the Eye, 1998 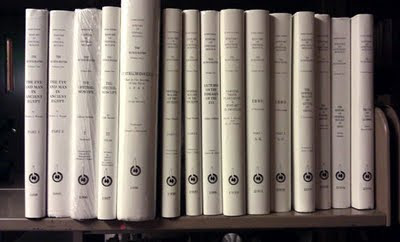 This series is a valuable addition to the library's resources on the history of ophthalmology. Volumes 2, 3 and 11 in this series were translated by Dr. Blanchard; we are especially pleased to have these books as documents of his contributions to the field.
Posted by Maija at 12:50 PM No comments: 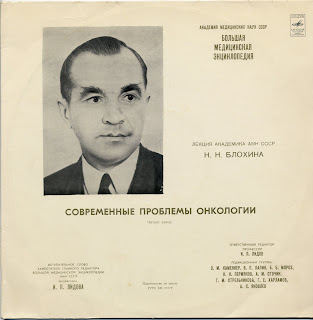 One of the collections that I have always wanted to dig into a little more here at OHSU HC&A is the Soviet Doctors LP Collection. Currently we have 3 12” vinyl recordings of various medical talks given by Soviet doctors. The three LPs are stored in the Archives stacks in the Old Library. Along with the LPs are included a “Concert Program for the participants of the 9th International Congress of Gerontology” and an English-language version of a Soviet Customs Declaration form.

The LP Cover shown above reads in the upper right-hand corner “Academy of Medical Science USSR – Great Medical Encyclopedia.” Below that, “Lecture of the Academic of the AMH (Academy Medical Science) of the USSR – N. N. Blokhin.”

And finally the title, “Modern Problems in Oncology,” and in tiny letters below, “Read by the Author.”

Fascinating what can be found in the archives!

Posted by Historical Collections and Archives Staff at 1:54 PM 1 comment:

Just about a year ago, Sara blogged about a new project to add gallery labels to the portraits hanging in the Old Library meeting rooms. As she pointed out, "While some of the portrait frames do bear the subject's name and (sometimes) dates, others lack any indication of who the person was and why they rate a big painting in one of the hottest party spots on campus. "

I'm very pleased to announce that this project was completed in April. Each of the twenty portraits is now graced with a gallery label bearing the subject's name, birth and death dates as appropriate, and university affiliation. In many cases, we were also able to identify the artist and the date of the painting. 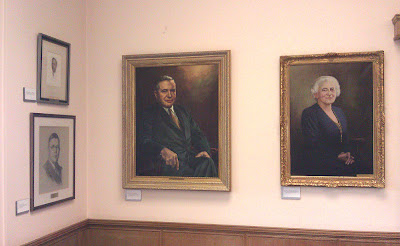 More information about the portraits and their subjects is available from HC&A - just ask!

Many thanks to the OHSU History of Medicine Society for funding this project.
Posted by Maija at 11:13 AM 1 comment: