Through the generosity of the OHSU History of Medicine Society, we were recently able to acquire a fascinating document of frontier medicine: 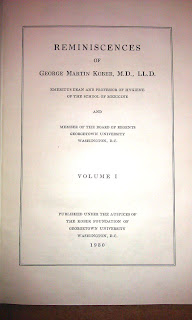 George Martin Kober, M.D., L.L.D. (1850-1931) spent much of his early career as an Army surgeon in the American West. Between 1874-1888 he held post surgeon appointments in California, Nevada, Idaho, and Oregon. This memoir includes detailed descriptions of frontier health conditions and military life, biographical sketches of his colleagues, and reports on encounters with Native Americans. As a dog person, I also appreciate his occasional remarks on the subject of “canine sagacity.”

The book will be cataloged for the library’s Historical Collections & Archives, and available for research in the History of Medicine Room. Many thanks to the HOM Society for making this acquisition possible!

Sara wrote in 2009 about the mysterious disappearance of Darrel Austin's monumental mural The Evolution of Medical Education, a WPA commission that hung in Mackenzie Hall until a 1952 building renovation. While doing some research on Austin, I found a photocopied newsletter article mentioning that his wife, the illustrator Margot Helser Austin, had also worked on WPA commissions on Marquam Hill - and that a similar fate befell her work.

WPA records indicate that Margot Austin was commissioned to do a series of fairytale illustrations for Doernbecher Hospital. There they stayed until the hospital relocated in the 1950s. And then the trail goes cold. Like her husband, Margot Austin went on to considerable professional success in the 1940s-1950s, and by the time art connoisseurs came looking for her early work, it was too late.

It is, of course, entirely possible that both of the Austins' artwork are side by side in a storage room somewhere on campus, waiting to be rediscovered.
Posted by Maija at 12:38 PM