I find this statement hard to believe, at least from my standpoint. William Fitch (Pop) Allen gets a lot of recognition from us. And for good reason. At least 6 of our oral history interviewees talked about him, we have blogged about him quite a bit and Robert Stone Dow wrote a fairly substantial biography of Allen in 1951, the year Pop died. His bibliography numbers 56 titles.


More than one biography exists that tells of his many accomplishments. But because he wrote and published prolifically and because he was Head of the Department of Anatomy at the University of Oregon Medical School (1916-1946) and because he was beloved and respected by colleagues and students alike, I don't believe what the anonymous author of this week's editorial wrote at the time of Allen's death.

When Allen died, it appeared that journalists and editors looked deep into their files and actually could not turn anything up on Allen. In fact they turned up only two articles that mentioned him. The author then says that perhaps, "...it was not strange at all that Dr. Allen made the news columns so seldom. Despite his notable contributions to science, particularly in brain and spinal cord research, he was about the most modest little man imaginable."

The author continues, "We're sorry we didn't know Dr. Allen. We are inclined to envy his close friends and the thousands of medical students who heard his lectures, shared his vast knowledge and were privileged to call him "Pop". We're sorry too, that there aren't more "Pop" Allens. Gentlemen and scholars are all too few these days."

OK. Now I see what the author was trying to tell us. It seems that in this case, a man was truly not recognized outside of his field until after his death.
Posted by Karen Peterson at 10:37 AM No comments:

Apropos of Duke University's beautiful exhibit of anatomical flap books, I posted about some examples of this genre in OHSU Library collections. I finally had a chance to get some quick snaps of a fabulous recent acquisition:

The first flap of Table IX shows the following: 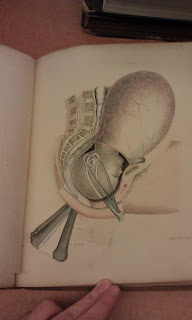 "This is the most frequent of all the wrong presentations of the head. In this position the head is usually longer in passing through the pelvis...but if the pelvis be well formed, and the action of the uterus strong, in the majority of cases the child will expelled alive by the natural efforts..."

Flip back the first flap to see: 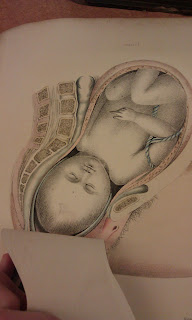 "In this unfavorable position, the head is ... liable to become arrested in its progress through the pelvis..."

Flip back the second flap and you get: 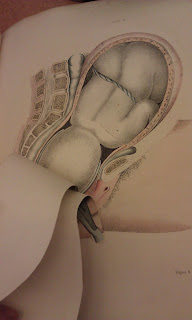 "...the head being arrested in its progress by its untoward position, it becomes expedient to alter the position by turning the face into the hollow of the sacrum..."

Flip back the untoward baby's head to see the last plate: 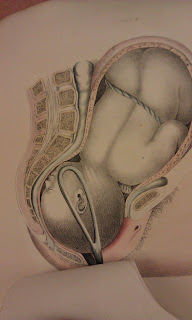 "The management of these cases must, in a great measure, be left to the efforts of nature, as the child may pass by the pains only, after a tedious labor. But the features are often amazingly distorted, and it is well known that long and severe pressure on the head in such presentations often destroy the child in the birth. Therefore if assistance can be rendered either by the forceps of vectis to shorten the labor...the judicious use of such instruments must be acknowledged to be of real benefit."

Spratt's Obstetric Tables will be cataloged for the History of Medicine Collection, and is available for research in HC&A.
Posted by Maija at 1:36 PM No comments:

This Friday night, Karen and I will be very honored to attend the 30th anniversary celebration of Oregon Physicians for Social Responsibility. The state chapter of PSR is active in health and peace issues on both a local and national level. The event will be held at the Oregon Zoo and will feature a keynote speech by Nobel Peace Prize winner Jody Williams.

HC&A holds records of Oregon Physicians for Social Responsibility within the papers of Dr. Charles Grossman, M.D., a longtime member of the organization. We are also extremely grateful to Dr. Grossman for making it possible for us to attend.
Posted by Maija at 2:39 PM No comments: