She'll Be Comin' 'Round the Mountain

Popping open a digital file of one of the pages of the first folio scanned, dated 1951, an eye catching title came into focus: "The Medical-Care Victory." With compulsory health care on the brain, I thought that maybe the article deserved a closer look.

The author proclaimed, in the words of the President of the American Medical Association, Elmer Henderson, "...that the fight against compulsory health insurance has been won...." But his declaration of independence from government control of the country's health care system was carefully qualified with a couple of buts and what-ifs.
Silence was the only evidence presented in the case: the "almost complete absence of agitation", a sign of acquiesence by the federal government and also by its citizens bore out President Henderson's contention, he claimed. The victory was won!

The medical profession spent $4,500,000 in a two and a half year campaign against universal health care. But the author said that there was more to the victory than a very expensive investment of funds supporting the fight against compulsory health insurance. The real hero here, he stated, was the spread of voluntary health insurance.

At the time, more than half the population of the US was covered by some type of insurance. The impetus for government sponsored health care in the first place was the fear of "sickness-caused" financial disaster. But the rise of the Blue Cross organization and programs such as prepayment of hospital fees, helped to alleviate these fears. Blue Cross alone, at the time of the writing of the article, covered 41,500,000 persons.
Physicians had something to do with the progress and public acceptance of health care systems that provided voluntary buy-in, they accepted and approved the health insurance companies.

Additionally, the AMA formed a committee of laymen who represented the various segments of society to keep a watch on the public's point of view, and if... if that viewpoint were permitted to guide the profession... never, ever, ever would this battle need to be fought ever again.
So here we are again...
Posted by Karen Peterson at 2:03 PM No comments: 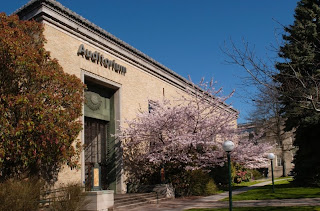 A springtime view of HC&A Headquarters, also known as the Old Library/Auditorium Building.
"The Oregon Climate, west of the Cascade Mountains, is unusually mild and equable...To persons suffering from nervous strain and those troubles incident to higher altitudes it in unsurpassed..The warm Japanese current which washes the Oregon shore tempers the climate, even in winter time, to a gentle spring warmth. To the east the Cascade Mountains form a natural barrier, guarding and conserving this warmth. This explains why it is a land of such noble forests and unrivalled game preserves; why its streams are rich in the finny tribe, making it the fisherman's paradise; why its fruits reach a perfection unknown in other States...; why its crops never fail, but always yield full harvests."
-- North Pacific Dental College, Annual Announcement, 1899/1900
Posted by Maija at 10:02 AM No comments: 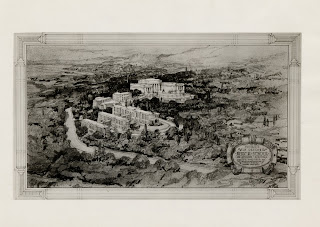 Pictured above is a conceptual drawing for the University of Oregon’s Medical School produced by Lawrence and Holford Associates and Architects (a little guesswork on the names was required as the detail when zooming starts to degrade). The drawing is undated, however according to the Wikipedia article on Ellis F. Lawrence, he was partnered with Holford between 1913 and 1928, which gives us a nice date-range for the production of the design. Lawrence was known for founding and being the first dean of the University of Oregon’s School of Architecture and Allied Arts from 1914 until his death. His works, which one can still find in Eugene, OR, include the Knight Library and the Jordan Schnitzer Museum of Art.

Sometimes I suspect that what really drew me to special collections librarianship is my love of purple prose:

"Ray Matson died a tragic death. Perhaps it was fitting. Several centuries ago he would have been the beau ideal of Dumas's Musketeers. Graceful, handsome, well-groomed, ever alert and self-assured, exquisitely poised and with a characteristic 'swing' to every movement, incisive and decisive, always up for adventure and a hazard, he indulged this sheer joie de vivre in fine horses and steeple-chasing and later in aeroplanes, -- now, that modern convention has sheathed the sword."

This 1935 tribute in the American Review of Tuberculosis goes on like this for quite some time. 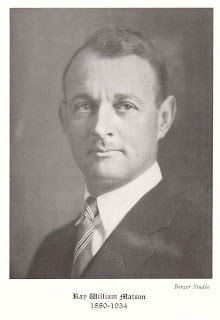 Matson died in an automobile accident in 1934. Sara wrote several posts on her research about Ray and his twin brother Ralph - including the mystery of which brother is depicted in this dashing portrait.
Posted by Maija at 2:26 PM No comments: