"Through our great good fortune, in our youth our hearts were touched with fire".
This was Dr. Malcom Heath quoting Justice Oliver Wendall Holmes as he addressed a local high school graduating class. And surely Dr. Heath's heart had been touched by fire. He was a daring and dedicated doctor who served the more than 3,000 residents of Washington's 170 San Juan Islands.

The residents of San Juan County raised $30,000 to build Dr. Heath a clinic in Friday Harbor that rivaled modern hospitals in the State's more populated mainland cities. But like the physicians of old, Dr. Heath was also a home-visit doctor. He piloted his own plane, landing on small strips built specifically for the purpose of accomodating his plane.

The county's people were through with settling for the idea that country living meant spotty and inadequate medical care. Groups, such as the Lions, Kiwanis Clubs, Chambers of Commerce and the American Legion Posts, were active in seeking competent physicians. It dawned on them that in order to draw qualified physicians, it was necessary to provide adequate facilities. And that they did.

Dr. Heath did not let the weather or geography prevent him from reaching patients and even flying them to the hospital in nearby Bellingham (only by plane is it near). The nature of the weather, which is often, cloudy, foggy and rainy, the geography of small hilly islands, the flora and fauna and the tides were not insurmountable obstacles to the good doctor.

"Sometimes when it's foggy and overcast, I miss all day long. The other day the weather came right down to the deck, and I could hardly see at all. In the morning I got a call from a nearby island. It's got a 2,000-foot cow pasture for the landing. If you come in from the north you have to come through fir trees on a cove, jump a fence, miss a knoll and then you are down. If you come in from the south you have to worry about wires.

I got down all right. I had to suture a laceration on the face of a man who had been kicked by a cow. Then I got a call from Eastsound on Orcas. The fog was thick, and I was going in one hole and out another, coming out around these hills for a second, trying to figure out the coastline. On landing I found that a boy had suffered a compound fracture of the fibula and evulsion of tissues when he fell off the back of a tractor and into the harrow. I stopped his bleeding and was going to fly him to Bellingham when I got a call from Friday Harbor that a guy building a dock had suffered a severe laceration when a cable snapped, and I had to get someone else to fly the boy to Bellingham."

At the time of this interview, the doctor was making about 250 flights a year with most of them taking 20-30 minutes.

And so it is that the rural communities need doctors and better facilites and in order for that to happen they need to help themselves. Perhaps doctors no longer arrive by horse and buggy or in an old Model-T with their offices in small black bags; but the fact remains that rural communities still need the home-visit doctor. It was said by
one country doctor that, "this help to a physician for the community he serves, is a familiar pattern in the whole Northwest".

And it takes a certain kind of doctor, who's heart has been touched by fire, to serve the rural communities of the Pacific Northwest.

Today we had a great visit from Thomas Albert, D.M.D., M.D., who shared his personal memories of Dr. Robert W. Blakeley, an OHSU speech pathologist and professor who passed away on December 14, 2010. We also looked over the photographs and biographical material that HC&A has collected on Dr. Blakeley over the years. All of us liked this energetic portrait: 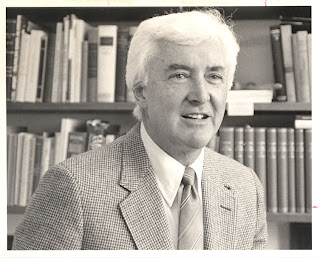 Dr. Blakeley dedicated his career to helping children afflicted with congenital disorders that cause speech impairments. One of his major contributions was the development of clinics for treating children with cleft-lip and palate, using a team-based approach to integrate medical treatment, speech therapy and social services. Blakeley established clinics around the world, many of which provided services at no charge.
Posted by Maija at 12:14 PM No comments: Links to this post

I'm working on three different articles this week, and while I'm normally a pretty concise writer, one of them ran a little too long for me to include the entirety of an excellent quote from distinguished alumna Estella Ford Warner, MD.

In the 1930s, Dr. Warner was among the women graduates of UOMS who were surveyed by registrar Lucy I. Davis Philips. One of the questions was, "What would you give to a prospective woman medical student?" Dr. Warner urged young women,

"By all means to study medicine -- as a profession it offers tremendous satisfaction and carries no more disappointments and risks than any other business or profession. However, I should strongly advise that before entering a professional school, one's education and experiences in travel, literature, art, etc. and the so-called 'cultural field' be as extensive as possible -- those things for the medium for social intercourse and success in medicine depends to a greater extent than many realize upon one's [understanding] of people and their interests, as well as making the mere mechanics of living more pleasant by an appreciation of life and those things that are the warp and woof of civilization."

The survey data and response cards form part of the Lucy I. Davis Phillips Collection, an incredible source of information on women educated in the early days of UOMS.

Dr. Warner's sentiments seem particularly timely as I've recently greeted many prospective MD students who stumble across the History of Medicine Room on their campus visits. Each one I've spoken to has wondered why such a place exists at a medical school, and then expressed amazement and delight that the resources are here for students such as themselves to use.


Posted by Maija at 11:51 AM No comments: Links to this post