The Old Gray Doctor: He Ain't What He Used to Be
Stranger than Fiction

If you have been a visitor to our online portion of the winter exhibit at the OHSU Historical Collections & Archives web site, The Literature of Quackery: Amusement and Understanding, you will have seen the section on the Spectro-Chrome Hoax. (In actuality, the exhibit was created by Loren Pankratz, Ph.D., clinical professor,

OHSU Department of Psychiatry).
So, as I was saying... the Spectro-Chrome Hoax... Dr. Pankratz tells us that Dinshah Ghadiali (1873-1966), inventor of this piece of equipment, "was arrested in Portland after a pistol battle with the police. He was sentenced to prison for violation of the Mann Act, which restricts the movement of minors across state lines for certain purposes. [Huh?]
But [Ghadiali's] visits to prisons in most instances were related to his practice of medicine without a license. In fact, the AMA could not find that he ever graduated from an accredited medical school. To avoid prosecution, he relabeled "cure" as "normalating" the body. He did not "treat" patients but said he could "restore their Radio-Active and Radio-Emanative Equilibrium." Ghadiali listed his credentials as M.S-C. (honorary) M.D., M.E., D.C., Ph.D., LL.D., N.D., D. Opt., D.F.s., D.H.T., D.M.T., D.S.T., etc."
Pankratz goes on... "Ghadiali was charged in 1931 with grand larceny after someone complained that his machine did not perform as promised." After producing several physicians who claimed to have had success with the "gizmo", he was found not guilty. But he was hauled into court once again in 1945 when his "star witness", who he claimed to have cured of seizures, "had one on the witness stand." His books and lamps were seized, but according to Pankratz, he returned to selling the lamps once again [for $750.00/ea.] but was able to manage no further prosecution by attaching a label that read, "no curative or therapuetic value".
If you want to know more about Ghadiali and his Spectro-Chrome and his many other contraptions, ideas and follies, you might be lucky enough to find his rare books somewhere. Rare because "the FDA destroyed all of the copies they could find".
I decided to write about Ghadiali today because I stumbled across a news article in the clippings with a large photo of the Spectro-Chrome apparatus. The 1978 article highlights our Medical Museum Collection and includes a large photograph of our... yes I said our... Spectro-Chrome Metry machine. Sally James, journalist of the Community Press, describes the apparatus: "it is just one of the chilling bits of medical paraphernalia preserved in the History of Medicine Museum..." How'd one end up here?
This was quite a coincidence... a stroke of luck, serendipitous even, that I happened across the clipping just when the artifact is displayed alongside the many books and a few of the artifacts from Dr. Pankratz' collection.
If you would like to see the Spectro-Chrome Metry machine in all its glory, come and visit the exhibit. As always, it is installed in the lobby of the OHSU Library, 3rd floor of the BICC building on the Marquam Hill campus.

Posted by Karen Peterson at 11:43 AM No comments:

In the process of researching the furnishings of Dean David W.E. Baird's office (long story), I found dozens of great photos of my desk, a mid-century battleship that once belonged to the man himself.

I picked two of the photos to scan for a blog post that I was planning to write this morning. Then I discovered that back in 2008, Sara had selected the exact same ones for her post about the desk's arrival in HC&A. 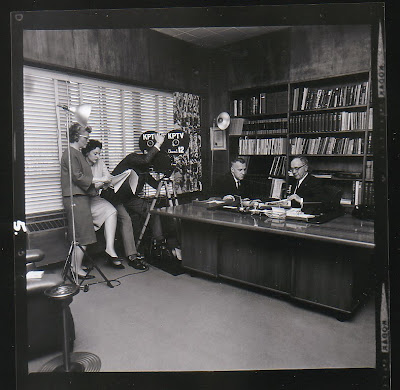 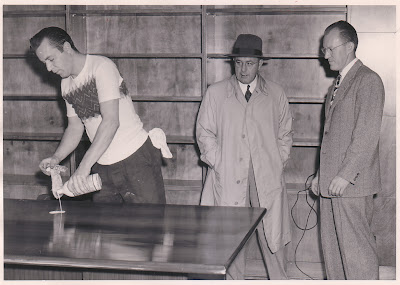 And someone even commented about the guy's really cool shirt, which I also found noteworthy.
Posted by Maija at 2:36 PM No comments:

New exhibit: The Literature of Quackery: Amusement and Understanding

OHSU Library's Historical Collections & Archives is pleased to announce the exhibit The Literature of Quackery: Amusement and Understanding. The exhibit features books, artifacts and other historic materials from the collection of Loren Pankratz, Ph.D., Clinical Professor in the Department of Psychiatry at OHSU. 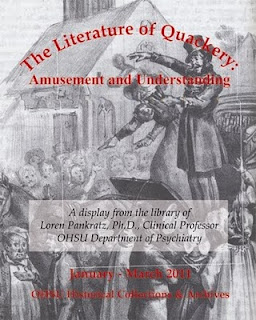 The exhibit is on view from January through March and is open to the public. It is located on the OHSU campus, BICC building 3rd floor, Main Library lobby.