Innovation is our Middle Name and our Legacy

We here at Oregon Health & Science University are aware that the OHSU clinical and research community play a prominent role in medical innovation. But, perhaps at times we need to be reminded that this is not a new development in the story of OHSU; innovation is our legacy.

Here's just one example: Fifty six years ago it was disclosed at a joint meeting of the Tissue Culture Association and the American Association of Anatomists, that for the first time in medical history, human blood cells had been kept permanently alive and had successfully multiplied in culture bottles.

Where? You guessed it, right here at the University of Oregon Medical School.

Dr. Edwin E. Osgood, MD., who became a leading authority on blood diseases, was the professor of experimental medicine at the school. Osgood had been starting cultures from cells separated from human blood and bone marrow in the school’s experimental lab for 20 years. It wasn’t until around 1953 that he developed a technique called “gradient culture method”. This allowed the cells to live, but they only survived 50-100 days with no further cell growth. Finally, when he and John Brooks, cytologist, developed a method called “controlled gradient bulk culture method”, he was able to report long term survival and growth. This exciting innovation gave researchers, interested in chemical, tracer and metabolic studies and those working on agents used to treat leukemia and cancer, ample materials to work with.

Osgood was an innovator extraordinaire: In the Oregon Encyclopedia, Sara Piasecki can be quoted as saying:

He performed one of the first bone marrow aspiration analyses in the United States, and was the first to establish normal values for specimens, improving our understanding of abnormal blood cell production in disease. In 1936, with student Inez E. Brownlee, he developed a method for culturing human bone marrow outside the body. This advance was hailed by the American Medical Association as “a development with more promise than the artificial heart.” In 1939, Osgood applied what he had learned about bone marrow to therapy and attempted the first bone marrow transplant on a patient with aplastic anemia.

Osgood studied the life span of white blood cells and paved the way to the development of a method for culturing these cells in the diseased state known as leukemia. In 1941, he began using a type of controlled radiation therapy for leukemia patients. In 1957, he presented a unifying hypothesis of the cause of cancer, proposing that the absence of regulating chemicals that normally control cell growth might be responsible. His hypothesis brought together multiple hypotheses then in vogue, almost all of which focused exclusively on types of cell damage that could cause cell proliferation. Twenty years later, after the development of newer bone marrow culturing techniques, Osgood’s malignancy hypothesis was confirmed.

In 1962, Osgood’s team was the first to successfully unwind a human chromosome by placing blood cells in a solution, making it possible to study the structure of this basic unit.

So this is just one story in many that we will tell about OHSU and the remarkable people who have left their mark on medicine.

In nothing do men more nearly approach the gods than in giving health to men. ~Cicero

Posted by Karen Peterson at 1:16 PM

When a book is more than book 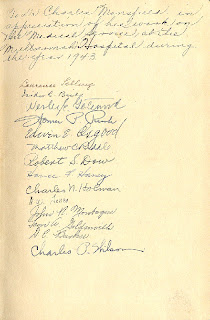 Last week I posted about the surprises that I've found in book donations. As I complete another gift review this week, I'm sharing another great example. This time we have a rather ordinary book made extraordinary by the addition of an inscription on the flyleaf, which reads:

To Dr. Charles Mansfield - in appreciation of his work on the Medical Service, at the Multnomah Hospital during the year 1943

The book is Thomas J. Dry's A Manual of Cardiology (Saunders, 1943). While it's not a rare book in the traditional sense, the inscription provides biographical information that might not be available anywhere else, giving this copy unique research value.
Posted by Maija at 9:54 AM