Stores from the Clippings

You'll Shoot Your Eye Out!
Well, it's that time of year, jingle bells, mistle toe and stockings all hung in a row... and A Christmas Story. No not the "Christmas story" but the movie, A Christmas Story.
If you have seen it, you will well remember this scene:
Ralphie is visiting Santa at the department store, only he can't remember what he wanted.
Santa Claus: How about a nice football?
Ralphie as Adult: [narrating] Football? Football? What's a football? With unconscious will my voice squeaked out "football".
Santa Claus: Okay, get him out of here.
Ralphie: Ralphie as Adult: [narrating] A football? Oh no, what was I doing? Wake up, Stupid! Wake up!
Ralphie: [Ralphie is shoved down the slide, but he stops himself and climbs back up] No! No! I want an Official Red Ryder Carbine Action Two-Hundred-Shot Range Model Air Rifle!
Santa Claus: You'll shoot your eye out, kid.
This scene is particulary funny because what child (of my generation anyway) can't remember his mother or father yelling, "Don't run with those scissors/that knife/that stick, you'll poke your eye out." With a BB gun... "Be careful with that thing, you'll shoot someone's eye out!" I did happen to imbed a BB in my brother's thumb one day regardless of our mother's warnings. We siblings still have two eyes, despite our reckless childhood.
Today's story from the clippings seems to be one of those that parents tell to their children to teach a lesson as to why they're not going to get them a BB gun for Christmas. I don't know, maybe kids don't beg for BB guns like they used to.
Johnny Klien and his friends were playing on the cliff at the back of the old Montgomery Wards store, when one of the boys with a BB gun shot Johnny lodging a BB in the right eye. According to Johnny, he had been yelling at his friends to stop shooting. They had yelled back, "We're not going to shoot you, Johnny". Johnny's mom claimed that she would never have bought Johnny a BB gun. He was happy with a bicycle, a baseball and a football.
Johnny, one of nine children, had a paper route and had been the first savings depositor in the new industrial branch of the First National Bank that past December. He deposited $70.00 worth of buffalo head nickles and pennies he had saved from his paper routes. His father was not able to work, his older brother worked a paper route and his mother rented out rooms to provide for the family.
The mother of the boys with the BB gun said that she was sorry and that yes, she knew that kids weren't suppose to have BB guns in the city but her boys pestered her so...
So... a physician at the Doernbecher Memorial Hospital for Children removed the BB and Johnny reposed in bed, couldn't move his head much or sit up nor could he even stir a little. The prognosis was that he would probably only see a bit of light out of what remained of his bright blue eye.
So this is the season... if your children are begging for an Official Red Ryder Carbine Action Two-Hundred-Shot Range Model Air Rifle for Christmas, take heed.
Posted by Karen Peterson at 1:35 PM 1 comment: Links to this post

"The Michelangelo of Medicine"

Via the New York Times Well blog, I discovered the exhibition Frank H. Netter, MD, Michelangelo of Medicine, now on view at the Morris Museum in Morristown, NJ.

Netter established himself as a commercial artist, a career of which his parents disapproved. Pressured to find a more dependable vocation, he attended New York University's medical school and trained as a surgeon. This unusual combination of skills gave him the background to become "the foremost master of medical illustration."

If a trip to New Jersey doesn't fit into your travel plans, the OHSU Library holds many of Netter's classic texts. In the HC&A collections I found one of the many promotional items that Netter designed for CIBA Pharmaceutical Products: 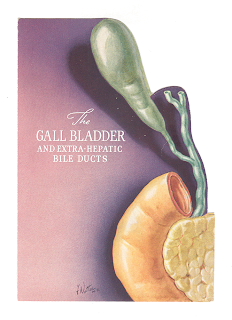 Published in 1938, this pamphlet excerpts "Anatomy of the Gall-Bladder and Extra-Hepatic Bile Ducts" from Cunningham's Text-book of Anatomy, and promotional copy for the drug Trasentin. But Netter's illustrations - in a beautiful art deco color palette - steal the show.
Posted by Maija at 9:05 AM No comments: Links to this post