For the traveling exhibit from the National Library of Medicine, "Changing the Face of Medicine: Celebrating America's Women Physicians", I was curator of the exhibit that accompanied the panels NLM sent. One of the Oregon physicians I highlighted was Amelia Ziegler, MD. The label for her exhibit case read:
Dr. Amelia Ziegler was born in 1861, a native of New York State and was educated in the Midwest. She taught school for several years in New York and Missouri before studying medicine at the Women’s Medical College in Kansas City, Missouri. She graduated in 1898 with highest honors.
Dr. Ziegler moved to Portland and began her practice that same year, working mainly with women and children. It was said that she delivered 3,032 Oregon babies and never lost a mother. Her office was in the Alisky Building on 3rd and Morrison, where for several years, she shared a reception area with Dr. Esther Pohl Lovejoy.

In 1903, she went to Chicago to serve as senior physician at the Women’s and Children’s Hospital; later she worked at Cook County Hospital and in the clinic of Dr. Isaac Arthur Abt. Returning to Portland, she joined the staff of the Women’s Convalescent Home, Florence Crittenton Home and the Portland Sanitarium.
Dr. Ziegler was a charter member of the Portland Woman’s Medical Club, a member of city, county and state medical societies and the American Medical Association. She served on the staff of the Women’s Convalescent Home and the Portland Sanitarium. She was also a lifetime member of the Medical Women’s National Association and an active member of the Social Hygiene Society.
Her brother was Frederic J. Ziegler, a graduate of the University of Oregon, Class of 1901, Jefferson Medical College Class of 1905, and a member of the University of Oregon Medical School faculty from 1911-1922 (surgery).
Apparently that very last paragraph had escaped my notice, though I wrote it, printed it and mounted it. When I read Frederic's obituary dated November 1953 , I was surprised to read that here was Amelia's baby brother, 17 years her junior.
Fred had practiced medicine in Portland for 46 years and was still in active practice when he fell ill and, after only 3 weeks, died. He attended the University of Oregon Medical School from 1897-1901, where he starred on the football team, (here's that football photo again, though it must be before Ziegler's time since it does not include Ziegler) and served as a member of the UOMS faculty in the department of surgery from 1911-1922. He was a member of the Multnomah County Medical Society, the AMA Upsilon chapter of Alpha Kappa Kappa medical fraternity and Sigma Mu social fraternity; as well, Dr. Ziegler served in the Medical Corp as a captain during WWI.
Sadly enough, we don't have a single photograph of Dr. Fred Ziegler.
Posted by Karen Peterson at 12:00 PM No comments: Links to this post 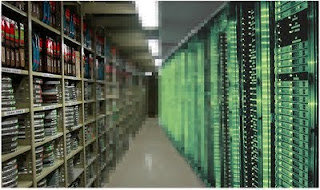 Last weekend I attended Reimagining the Archive: Remapping and Remixing Traditional Models in the Digital Era , a symposium hosted by UCLA’s School of Theater, Film & Television. As a traditionally-trained archivist and librarian, this symposium was a great way to challenge my assumptions about what an archive is, how an archive is used, and the roles and relationships of its stakeholders of an archive.

For my talk on the dissipating distinction between private collections and public archives, I was teamed up with two terrific co-presenters. Amelia Abreu of University of Washington presented “Tag games, tweets, and recipes: collections in networked public,” exploring the relationship between sharing and saving in social networks. Beth Capper of the School of the Art Institute of Chicago presented her impressive efforts to preserve the documents of filmmaker Shirley Clarke’s Tee Pee Video Space Troupe workshops.

I was inspired by Rick Prelinger’s keynote address “We Are the New Archivists: Artisans, Activites, Cinephiles, Citizens.” My other favorites were Megan Winget on video game preservation; Ricardo Punzalan on the virtual reunification of colonial archives; and Portland’s own Anne Richardson and Dennis Nyback on their project The Portland that Was.

With so many film scholars, artists, and independent archivists in attendance, this was an incredibly diverse mix of attendees, making for a refreshing change from the usual professional conference. Bravo to the organizers for getting all of us together for a few days!

Posted by Maija at 12:29 PM No comments: Links to this post