Beginnings of a long awaited celebration

Next week the school is hosting a dinner reception for its East Coast Alumni in Washington, D.C. Thanks to the School of Nursing's support of Historical Collections & Archives, we've already received a copy of this invitation for our records!

We're hoping to work closely with the school to help them develop exhibits to travel throughout the state. Details aren't available yet, but stay tuned for more information about the SON Centennial throughout the year.
Posted by Emily at 8:58 AM No comments:

We recently received a donation of the two photographs below, with the question: what buildings are in the background? The first image depicts a Rose Festival Queen wearing the same tiara that is still used to crown Portland's contemporary queens. The image seems to be taken sometime in the 1920s. 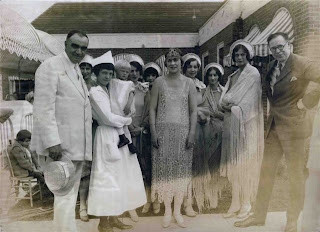 The second shows a group of Royal Rosarians during a rose bush planting ceremony purportedly for Doernbecher Children's Hospital (even though we know the buildings in the background are not Doernbecher.) 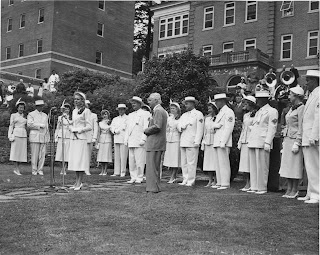 Neither Karen nor I know what building is in the background of this image and we thought we'd ask you, dear readers, to help us identify where these photographs were taken. Bonus points if you can identify which Rose Queen is depicted in the first photograph! Comment on this post with your guess, or with your certainty.
Posted by Emily at 8:39 AM No comments:

We have a collection of records from the Oregon State Tuberculosis Hospital, including the hospital's log books. These books contain records regarding patients' admittance, operations, and death. The records we own go back into the 1920s, and we have even more complete from the 1940s-1960s.

Anyone may come view these records, especially if doing research about a deceased relative or loved one.

If you're curious about the history of the Oregon State Tuberculosis Hospital, give the information from the exhibit we produced in 2005 a read.
Posted by Emily at 8:22 AM No comments:

Here's Another Wonder from Our Shelves

Edward Jenner's An Inquiry into the Causes and Effects of the Variolae Vaccinae caught my eye this morning. This book caught my eye and opening it I found the most delightful introduction letter, as well as drawn images of the infections this vaccine was intended to prevent.

My Dear Friend,
In the present age of scientific investigation, it is remarkable that a disease of so peculiar a nature as the Cow Pox, which has appeared in this and some of the neighbouring counties for such a series of years, should so long have escaped particular attention. Finding the prevailing notions on the subject, both among men of our profession and others, extremely vague and indeterminate, and conceiving that facts might appear at once both curious and useful, I have instituted as strict an inquiry into the causes and effects of this singular malady as local circumstances would admit.

The following pages are the result, which, from motives of the most affectionate regard, are dedicated to you, by 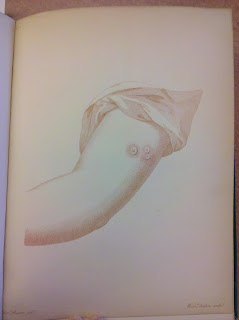 Case XXII.
From the arm of this girl matter was taken and inserted April 12th into the arms of John Macklove one year and a half old...

Thanks to the very helpful response from McGill University staff, Pamela Miller and Dr. Richard Virr, Head and Curator of Manuscripts, Rare Books and Special Collections, the final piece of the puzzle of the provenance for our three Sinhalese Olas has fallen into place.

To my inquiry, Dr. Virr wrote, "Dr. Casey Wood collected hundreds of olas during his travels in the 1920s in South Asia. He was, of course primarily interested in medical texts but he also acquired many other texts as well. Dr. Casey was a generous donor to McGill and many if not most of his collection of olas is held here, however, he gave examples (usually three) of medical olas to many of the medical libraries in North America. Your example would be the result of this distribution. As far as I know, there is no list of the institutions / libraries that received olas from Dr. Wood, this would be an interesting project. A definitive study of Dr. Wood and his collecting is a subject that awaits its scholar."

So now we do not have to presume any longer. But from this discovery, another project beckons: Who will step forward and do the definitive study of Dr. Wood's travels and collecting? I would love to see a scrapbook or two from his time abroad.
Posted by Karen Peterson at 9:06 AM 2 comments: