Extra! Extra! Read All About It!
No More Waiting Lines!
This was big, big news for Oregon. In 1954 the newspapers reported that, for the first time since the University TB Hospital opened its doors in 1939, there was no waiting list for new cases. University of Oregon Medical School Dean, David E. Baird, said in a report to the State Board of Control, that the disappearance of the waiting list was due to several advances: the expansion of the Oregon State Tuberculosis Hospital in Salem, decreased periods of hospitalization thanks to the introduction of antibiotics such as streptomycin and viomycin in combination with the "wonder drug", (a compound made from para-aminosalicylic acid and isonicotinic acid hydrazide) and advances in surgical procedures. Early detection and isolation also reduced exposure for much of the uninfected population. However, this didn't mean that there were fewer TB cases reported; it simply meant that patients were being treated with less advanced stages of the disease and therefore hospital stays were shorter.
Though tuberculosis was evident in the Northwest Indian populations, the first officially reported case was Fort Vancouver physician, Meredith Gairdner, in 1833. Reported cases continued to rise and consumption was the cause of 11% of deaths in Oregon by 1860. At the time, most patients were treated at home. Those who were financially able were advised to seek drier climates. During the years 1904-1906, 774 deaths due to tuberculosis were reported in Oregon. What was most needed was a place in which to house and isolate victims of this very contagious disease.

The Oregon Deaf-Mute School, which had opened in 1894, was soon abandoned because of inadequate roads to its relatively secluded location. The newly commissioned Oregon State Tuberculosis Hospital, the first state owned and state run TB hospital in Oregon, took advantage of the empty school. The hospital began admitting patients in November of 1910. The building soon filled to house and treat victims of "the great white plague".
During the first few years patients came very slowly as the idea of a tuberculosis sanatorium was new to the public. Soon, however, the hospital was forced to form a waiting list, and the demand for treatment exceeded the supply of beds. Starting with only fifty beds in 1910, the Oregon State Tuberculosis Hospital expanded to 120 beds in 1920, many of which were in open-air pavilions. In 1932, a new two story hospital was erected but by 1933 cases exceeded beds and 15 beds were installed in the Administration building.

For the next few decades, the hospital continued to have a significant waiting list. Some relief came as the hospital expanded its facilities. The construction of the 270 bed Eastern Oregon TB Hospital in The Dalles also helped to relieve some of the pressure for beds. With the opening of the University TB Hospital on Marquam Hill in 1939, the waiting list at the Salem hospital became nearly non-existent.

By the end of 1959, the Oregon TB hospitals had assisted over 8,000 Oregon residents to regain their health. In 1963, the State Legislature combined the Oregon State TB Hospital in Salem with the UOMS TB Hospital. As a result, patients located in the University TB Hospital w

If you look south across the canyon, and shift your gaze just east of the OHSU School of Nursing, you can still see the old University TB Hospital looking just as it did when it housed and treated tuberculosis patients.

Posted by Karen Peterson at 2:43 PM No comments:

From the Biographical Files

Today I wandered into a box of our biographical files; my fingers flipping over the tops of folders searching for a biographical gem. Lucky for us, gems aren't far from any place we look in Historical Collections and Archives. What I found was information about Dr. Raymond D. Grondahl.

His obituary from the Montana Standard touts him as being "instrumental in performing the first dialysis procedure in Oregon." This, no doubt, was performed prior to the university's purchase of the Travenol artificial kidney. In his file, Dr. Grondahl is pictured explaining the Travenol machine to a member of the Progressive Women's Club of Portland, which donated funds for purchase of the machine after the first artificial kidney at the medical school was constructed by doctors. I wonder what they used. Hopefully not sausage skins, drink cans, and a washing machine like the first artificial kidney on record!


By the way, don't forget about the Oregon Archives Crawl this Saturday, October 2nd to check out the display and slideshow that Karen and Ian are putting together. There will be lots of other archives represented, so go discover!
Posted by Emily at 8:38 AM No comments:

More than a Historical Gift, an Anatomical One 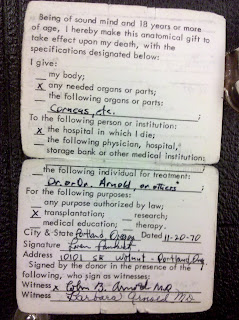 "Being of sound mind and 18 years or more of age, I hereby make this anatomical gift to take effect upon my death, with the specification designated below..."

Since the first of the Uniform Anatomical Gift Acts in 1968, several revisions to the act have been made.


The original Uniform Anatomical Gift Act was promulgated in 1968, shortly after Dr. Christian Barnard’s successful transplant of a heart in November, 1967. It was promptly and uniformly enacted in every jurisdiction. The 1968 UAGA created the power, not yet recognized at common law, to donate organs, eyes and tissue, in an immediate gift to a known donee or to any donee that might need an organ to survive. -UAGA Summary

We're lucky to have such a specimen to add to our collection.

By the way, don't forget about the History of Medicine Society Lecture this Friday, October 1st. Genius or Crackpot?
Posted by Emily at 9:19 AM No comments:

Recently one of OHSU's Reference and Instruction Librarians, Steve Teich, retired. These days he's spending his time golfing and enjoying fine dining. In his office used to hang a series of photographs of rural clinicians in front of rural clinics and hospitals. The geography of these locations spans from Gold Beach to John Day and places in between. Throughout his career, Steve worked with this rural network, called the OHSU Rural Health Information Network, and traveled all over the state visiting these rural hospitals and clinics. 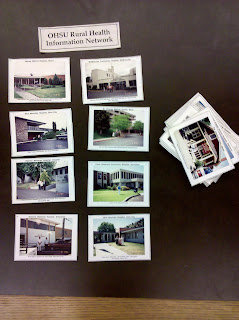 Where those images used to be now hangs an empty cork board, with shadows of these images. Each time I enter the office my eyes travel over to glance at the shadows left by the years these images hung in his office. 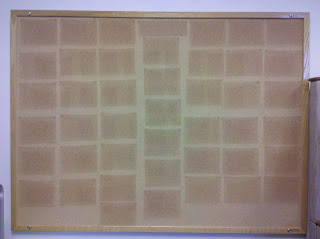 Fortunately for us we received these images as a gift, so that anyone can come see them by visiting the History of Medicine room.
Posted by Emily at 9:07 AM No comments: