QT for ROTC at UOMS
Some say that the end of The War to End War dates to the signing of the Versailles treaty in 1919; while others date the war's end on the armistice of November 11, 1918; and still others claim that the last formal peace treaties were not signed until the Treaty of Lausanne on August 23, 1923. It wasn't long after the end of the war, perhaps in anticipation of yet another war, that the University of Oregon Medical School initiated actions to establish an ROTC (Reserve Officers Training Corp.) Unit at the School.

On October 31, 1920 a directive came from the War Department, signed by the Surgeon General, M. W. Ireland, addressed to Dean Richard B. Dillehunt. As one of only ten medical schools chosen to establish a unit, the faculty accepted the charge and a medical officer, Col. Frank Baker, MC, was appointed as a professor of military science and tactics.

Continuing in reply to the affirmative response of the school, the Surgeon General stated that he was refraining from "dwelling on the necessity" to create ROTC Units, but that the lessons learned during the Great War were due to unpreparedness. But the Medical School was not new to military involvement, having been active in WWI in Base Hospital 46 and was prepared and eager to serve once again if needed.

The Surgeon General said that, "the present regulations [were] so liberal and elastic that the establishment and operation of an ROTC Unit" would not present insurmountable difficulties on campus. The medical men would be required to attend at least one of two lectures weekly but would not be required to wear a uniform or practice drill during the school year.

By the time September rolled around, a formal circular had arrived laying out the responsibilities and requirements for students participating: 90 hrs/year of theory and summer encampments during one's freshman and junior years, where they would receive a course in drill and field duties. (The image posted by Emily Wednesday must have been during these summer encampments http://drl.ohsu.edu/u?/hom,1163 ). The object of the training was to qualify the men as commissioned officers in the Officers' Reserve Corps.

The OHSU Historical Collections & Archives holds ample evidence of the UOMS Schools of Medicine, Nursing and Dentistry in the 46th General Hospital during WWII, so training was not in vain. Anyone interested in further research about the school's participation during the world wars, I can point you to scrapbooks, photographs, memoirs, uniforms, papers, records and much more documenting this very human experience

Well, all of this is to preface (and, of course, to highlight the collections) today's news clipping that reports that the ROTC program came to an end at UOMS in June 1954, where at a swearing-in ceremony on the steps of the Administration Building (that's Baird Hall to you), 8 received their commissions. Three were assigned to the army, two to the air force, three into the army reserves, and two went into the US Public Health Service.

The termination of the ROTC program was not unique to UOMS but all dental and medical programs in the nation ended. Perhaps there was impossible hope that we had actually arrived at the end of war.

Just like Sara mentioned yesterday here I am, the "lovely and capable" Emily Ford. I won't out-rightly contest her claims about me, but I will say this: I'm not new to blogging, and I'm not new to historical and special collections, but I am new to this blog and to these historical collections and archives. I hope that over the next few months I'll be able to share my insights into our collections and work with you.


One of the things I love about living in the digital age is making connections between resources in our communities. Perhaps one of my favorite connections is browsing through the OHSU Historical Collections & Archives Collection on the OHSU Digital Resources Library. It contains entertaining nuggets like this image of a female student holding a skeleton on her lap.
One of my other favorite ways to explore historical collections is to find connections from what happened "on this day." According to the New York Times, September 1st marked the beginning of WWII in 1939 (and the day that Bobby Fisher won the international chess crown in 1972), among other events.

So what was happening at OHSU during WWII? Well, a quick search in the Digital Resources Library, finds numerous images, but this one struck me more than the others. Drill practice! Can you name the buildings in the picture?

I'll be back next week, faithful readers, with more of my impressions of OHSU history, and the materials we have. I regret that I may not be able to bring to you daily what Sara was able, but I'll try my best to give you nuggets a few times a week. And of course, Karen will continue with her in depth historical views this Friday.
Posted by Emily at 2:35 PM No comments: 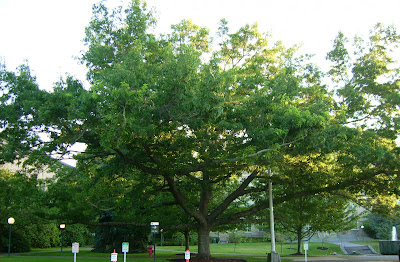 Well, this is it. My last post in this space. Don't panic! This space will remain clean and well-lit in my absence. As of tomorrow, the lovely and capable Emily Ford, OHSU's Scholarly Communications Librarian, will be pinch-hitting for a while, and of course Archivist Karen Peterson will still be bringing you Stories from the Clippings on Fridays.

We've been together nearly four years, dear reader, and you've become an important and valued part of my life. You've provided an impetus to think about what I was doing on any given day; you've encouraged me to see the special in our special collections; you've helped me maintain my day-tight compartments. You have even, on occasion, talked back, sent me information, shared photographs, corrected my errors. I like to imagine that, sometimes, you have chuckled privately, or wondered in silence.

I've enjoyed our time together, and even though I'm leaving, part of my heart will remain. I'll continue to watch this space, and I hope you do too.
Posted by Sara Piasecki at 10:26 AM 1 comment:

On Friday, I and library student worker extraordinaire Ian Terrell (who actually just received his official librarian sheepskin last week; congratulations Ian!) traveled down to the OHSU School of Dentistry for one final all-out assault on the vault and Room 13. We were determined to leave no archives behind!

Our mission was successful, thanks in large part to Ian's masterful modification of a standard booktruck to make it capable of carrying tens of mounted photographs larger than the truck itself. I have no image of that to show you (think of those vehicles you've seen carrying plate glass, only with a metal booktruck, two-by-fours, and rope), but I do have an image of one of the many, many large format photographs and photographic composites that we rescued from Room 13. Here, we see a composite of the North Pacific College of Dentistry, Class of 1922. 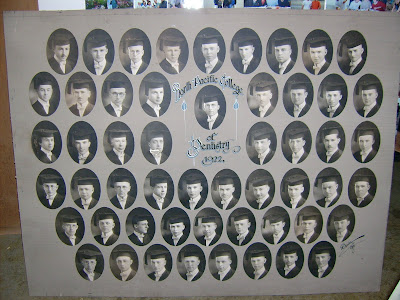 As a side note, I would like to point out that a good basic toolkit is a must in archival work. During our discussions about tools and their uses, Ian and I learned from Dr. J. Henry Clarke, DMD, that the Phillips screw was invented by a Portland dentist who sold the patent to Phillips. You can read more about that history on the Phillips Screw Company web site.

Stay tuned for more amazing facts about the School of Dentistry and the history of dentistry in Oregon as the huge hoard of materials from Friday's raid are processed over the coming months.
Posted by Sara Piasecki at 10:08 AM 1 comment: