Members of the Oregon State Medical Society, unrelentingly, came back again and again to the Oregon State Board of Higher Education, demanding the right to form an advisory council for policy-making, to ban pay-patients and to argue against full-time paid faculty at the new UOMS Teaching Hospital. They had been met with adamant negative responses to these demands for months.

But it seems to me that the OSMS had learned their school lessons well: We all must have heard the adage from the 1840 Teacher's Manual of Thomas Palmer that reads: "If at first you don't succeed, try, try again." And try, try again, they did. In the fray, Clyde Foley, executive secretary of the Society, suggested that the Board have dinner with the Society. The Board responded by sending Chancellor Charles D. Byrne to find out just exactly what the Society wanted (even though they knew perfectly well what they wanted) and to tell them in no uncertain terms that they would not rehash the same old arguments.

Board members felt that the issues were more specifically about in-fighting among physicians and less about policies and they believed that they had had enough meetings with the Society. It appeared that the time for discussion was over. The board was literally saying that if you don't have anything new to bring to the table, there is nothing to discuss and no reason to sit down to dinner. We are not willing to have a "rehash" of the same old arguments. The Society wanted an answer to what they deemed a critical question, "If the Dental school can do it, why can't we?" The simple but final retort from the Board is not surprising, "we're against it!" The decision from Board members – Mrs. E. B MacNaughton, Leif Finseth, Hernan Oliver, and R. E. Kleinsorge - was unanimous.

1. Legal responsibility for the operation of the medical school should be vested in a single body. Divided authority and responsibility between the two legal bodies would probably lead to conflict.

3. Such legally constituted advisory committees to professional schools are almost unprecedented in the country.

"The new teaching hospital is primarily for research and teaching to the benefit of medical students, physicians of the state, and as a public service to the people as a whole, and patients should be admitted without regard to their ability to pay and should be selected by the medical school officials for the contribution their diagnosis and care can contribute to teaching and research. Patients so admitted who can pay all or part of their hospital expense should be charged at the going rate for this service and thereby relieve the state to the extent possible. The new teaching hospital will be ready for operation January 1, 1956… and a carefully considered policy has been adopted by the board for its operation."

Not to put too fine a point on it.

Posted by Karen Peterson at 6:18 PM 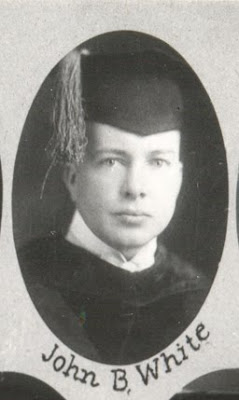 The library recently received thirteen boxes of books belonging to John BeVier White, M.D., an alumnus of the medical school. The donation gave us an opportunity to find out more about Dr. White, and we liked what we found (little though it was).

White was born in Shelby, OH, ca. 1898. By 1917, he had enrolled at Stanford University but left school to serve in World War I. After his discharge, he came to Portland to attend Reed College. He received his medical degree from the University of Oregon Medical School in 1927 and completed his internship at Good Samaritan Hospital before entering private practice in 1928. In 1940, he joined the Army and served as regimental surgeon for the 41st Division. He received the Silver Star for valor at Buna-Gona (when he removed shrapnel from his own knee so he could return to action). He remained with the Army until his retirement in 1959. He died in November 1972.

In our collection of wartime records of the Oregon State Medical Society (Accession 1997-003), we have some correspondence from White to the editors of the Service Bulletin. A letter sent from Australia in September of 1943 reads, in part: "Now as for the Silver Star - just [say] of this "I seen my duty and I done it."

50 years on: a half-century of Starr-Edwards 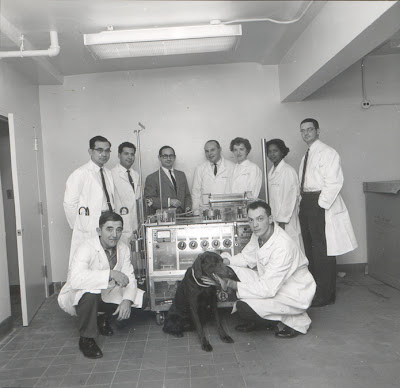 On this very day fifty years ago - August 25, 1960 - the first Starr-Edwards artificial mitral valve was successfully implanted in a human patient. In honor of that feat, we share this photograph of the Starr lab team, circa 1960.

One of the women pictured here, nurse Betty Stephens (second from right) was in the History of Medicine Room last week, along with perfusionist Jeri Dobbs (not pictured). Betty confirmed a detail that I had long assumed was exaggerated hearsay: she did indeed hand-sew the sewing ring to the bottom of at least one valve after scrubbing in the OR with the patient on the table. Talk about pressure to perform petit point!

Those interested in more details about the history of the development of the Starr-Edwards valve, especially the events leading up to August 25, 1961, mark your calendars: Richard Mullins, MD, will be presenting a talk on the topic at Dept. of Surgery Grand Rounds at 7:00 a.m. on Monday, September 27.
Posted by Sara Piasecki at 11:22 AM 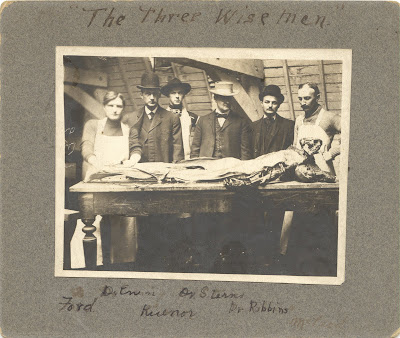 Some of the most remarkable images coming up from the OHSU School of Dentistry vault are those of the dental anatomy lab at North Pacific Dental College in the early part of the 20th century. The photo shown here was donated by Margaret Millgard Cooper, daughter of 1908 NPDC graduate M. Lewis Millgard, D.M.D. (Margaret herself is a 1937 graduate of the dental hygiene program at NPDC). According to faint notations on the back, the photo was taken in March 1907. Millgard identified the individuals as "Ford, Dr. Ewing, Ruenor, Dr. Sterns, Dr. Robbins, McLeod" and labeled the whole as "The Three Wisemen." I'm not sure what the makes the other three men, but there you have it. (If you ask me, at least one of the men was a dandy; check out the outfit on Ruenor, which involves a small white bowtie and some elaborate piping.)

Millgard also included the obituary for one of the individuals, Ray P. Robbins, gluing it to the back of the mount. The clipping is undated, but is clearly from a Portland paper. We learn that Robbins, a 1903 graduate of the University of Minnesota Dental School, was born in Sauk Center, MN, and practiced in Minnesota and North Dakota before relocating to Portland. The cause of death was spinal meningitis. Robbins was only 28 years old. 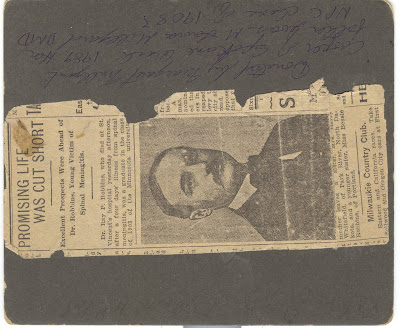 Posted by Sara Piasecki at 7:39 AM

Friday marked my second trip to the mysterious Room 13 in the OHSU School of Dentistry. Originally designed as the obligatory fallout shelters when the building was constructed in the mid-1950s, the three large cubbyholes off the back of the main cage area are like something out of an archivist's worst nightmare: hot, filthy, cramped, and used for storage of all sorts (and I mean all sorts; I won't go into what all we stumbled upon down there).

Most of the stash of "historical" items was separated out and set aside for a return trip with an additional set of strong arms and a couple of carts. (Since one must climb into the cubbies, carts will really only be useful in getting the materials from the cage to elevators, but that's better than nothing.)

I carried out a small handful of items that I just couldn't abandon to another week in the space. In that group were some original illustrations that just took my breath away; in the full light of the office they are just as stunning as they appeared in the gloom. While investigations continue as to the exact nature of the collection to which these drawings belong, I can tell you a few things about them. (Below the image; mildly squeamish folks beware!) 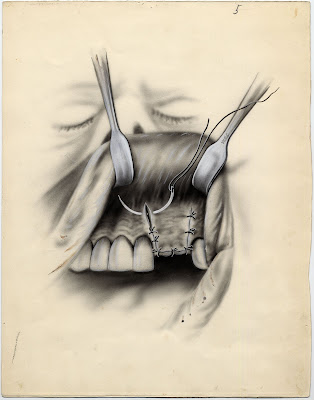 With the illustrations was a poster board decorated with mounted photographs and a typescript description of the operation shown, titled "So-Called Surgical Treatment of Pyorrhea Alveolaris" on the letterhead of one Wallace C. Shearer, D.M.D., Medical Arts Building, Portland. Dr. Shearer describes a new surgical technique he has developed, an alternative to the "Zentler flap operation" which was "extended yet modified" to overcome the main objection to Zentler, which was that only three or four teeth could be treated at one time. This new technique would allow the work to be done in fewer sittings, with less pain and discomfort to the patient. The oversize drawings seem to illustrate the same procedure as the photographs, and may have been exhibited in conjunction with the poster. Shown here is step 5, sewing the flap back up.

I believe there are more Shearer items in Room 13, but all I can say for certain at present is that Shearer was a 1902 graduate of the North Pacific Dental College, now the OHSU School of Dentistry. And one heck of an artist.
Posted by Sara Piasecki at 1:51 PM