The Ominous Red Light
Or why I'm not writing the usual "Stories from the Clippings" today
The real question is: where are my scans and accompanying working papers for the News Clipping Folios Digital Project? Unfortunately they are AWOL. The small black box with one terabyte of storage has been absconded by one of our highly talented IT staff, after we reported that an ominous red light was blinking.
That little box is where we store most of our electronic scans, which include our heavily accessed photographs and documents and many of our working files and house the scans of the news clipping folios. As it was explained to us, the data stored on the external drive is spread throughout the drive on more than one disk, so if one fails, the data can be retrieved. So we haven't lost our files, they are just on hiatus.

As with anything and everything here in the Historical Collections & Archives, there is never a good time to have them go away or fail. This external drive, which we call the Archive drive and another that we call the HOM drive, are safeguards against our hard-working PC hard drive failure. But apparently, one of the five discs inside of the Archives drive failed.

For those of us involved in information creation and management, safeguarding electronic information is a constant concern. Many staff hours can be lost and resources can be in jeopardy due to hard drive melt-down. I happen to be a veteran of one or two of those devastating disasters. Our true backup server is our Digital Resources Library. This is where the newspaper clipping folios will eventually live for public access. Lack of staff time to load them into ContentDM and to create metadata is the biggest obstacle to yet another layer of protection.

So we need our external drives to be loyal workhorses. Our IT guy assures us that we will have our drive back before next week.

So here's a cool picture to look at since I didn't have a cool story from the clippings.

As we all do, physicians have lives outside of their professional careers. In his "free time", UOMS alum, Herbert Merton Greene, class of 1904, was a Freemason, a member of the Anglo-Saxon Christian Association and apparently a drum major for the LaCrosse, Washington Cornet Band. He had a private practice in this small rural town until 1918, before returning to Portland to teach at the school and build a very successful practice with offices in the Medical Arts Building.

Posted by Karen Peterson at 3:00 PM No comments: Links to this post

We were recently privileged to be allowed to see and copy portions of what was referred to as The Brill Book--a collection of materials pertaining to the career of Isidor C. Brill, M.D. The binder, put together by family members, contains primarily reprints of Brill's papers. It also holds a bibliography of Brill's writings created by OHSU library staff in 1963 (so it's odd that we didn't have a copy of this already); an article from the Winter 1986 issue of the StV Update on the Isidor Brill Chair of Medicine at St. Vincent Hospital; and a typescript draft with manuscript corrections of Brill's article "Myocardial infarction in two sisters less than 20 years old" (published in JAMA 217:1345-1348).

Who was I.C. Brill? The Polish-born teenager came to Portland in 1903. He went East for his medical training, receiving his M.D. from Columbia University College of Physicians and Surgeons. He returned to Portland in 1916, joining the faculty of the University of Oregon Medical School and the staff of St. Vincent Hospital. At UOMS, he initiated medical grand rounds on Tuesday mornings and, with colleague Frank Menne, instituted the popular Friday clinicopathological conference. He worked to establish cardiac clinics at St. Vincent, and secured the funding for the hospital's first Lown defibrillator. He and colleague John Beeson were instrumental in reorganizing the old Hahnemann Hospital into Holladay Park Hospital.

Brill served in France during World War I, was the first Oregon governor of the American College of Cardiology, and was one of the first to publish on cor pulmonale (pulmonary heart disease. He retired from the medical school faculty in 1968 and died in 1975.

Brill's legacy lives on, both at St. Vincent with the Brill Chair, and also here at the OHSU Center for Ethics in Health Care, where the Madeline Brill Nelson Chair in Ethics Education commemorates Dr. Brill's compassion and integrity.

(I'd now show you a lovely photograph of Dr. Brill from the Daniel Labby Scrapbook, but our external hard drive is feeling a bit under the weather and has gone in for treatment--about which you'll undoubtedly hear more later.)
Posted by Sara Piasecki at 9:29 AM No comments: Links to this post 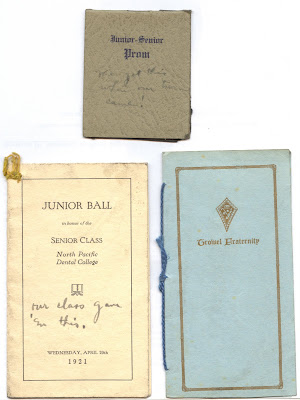 In among the boxes of materials coming up from the OHSU School of Dentistry vault are some subsets of items that we would consider small manuscript collections. These are usually groupings of unique items (photos, manuscripts) with a single source (creator or donor) that have survived as intact collections from time of acquisition by the dental school until delivery to us here in the archives.

One such little grouping has come to us from S.D. "Dutch" Orwitz, North Pacific College Class of 1922. In June of 1975, he sent an envelope from his home in San Francisco to Portland. The enclosed note had one word only: "Memorabilia." The collection includes nine photographs and three charming dance cards, from the Trowel Fraternity's "Inaugoration Day" in March 1921, the Junior Ball in April 1921, the Junior-Senior Prom in 1922. Only the March 1921 card bears names of dance partners; one wonders whether a girl from that spring night captured all the spaces for April and beyond....
Posted by Sara Piasecki at 12:30 PM No comments: Links to this post 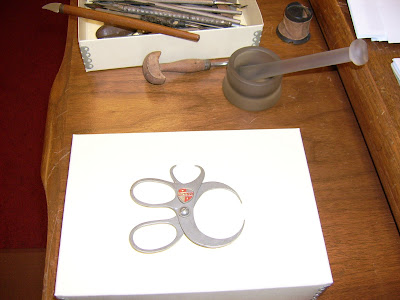 Well, there it is: the end of the day. Come too soon, as so often. Time positively sped by as I worked my way through two boxes of materials belonging to Walden I. Ferrier, D.M.D., 1908 graduate of the North Pacific College (precursor to the OHSU School of Dentistry)--part of last Friday's transfer of materials from the dental school vault to the Historical Collections & Archives.

The collection includes hundreds of dental instruments, implements, and supplies, as well as correspondence, patents, certificates and awards, photographs, military service documents, a financial ledger with patient accounts and royalty income records, and a very cool folio-sized hand-tooled colored leather folder which contained some of the aforementioned documents.

In fact, so much time went by while I puzzled over some of the equipment (like the Vitallium dual pliers thingy shown in the photo here - and check out the frosted glass mortar and pestle!) that I have little time to tell you about Ferrier himself. Luckily, George Hollenback, D.M.D., wrote a memorial to Ferrier in 1966, which is available in full text online courtesy of Washington State gold foil men Von Hanks and John Sechena at goldfoil.org.

You can definitely expect an exhibit on Ferrier in the future: this stuff is way too good to keep to ourselves for long!
Posted by Sara Piasecki at 4:02 PM No comments: Links to this post 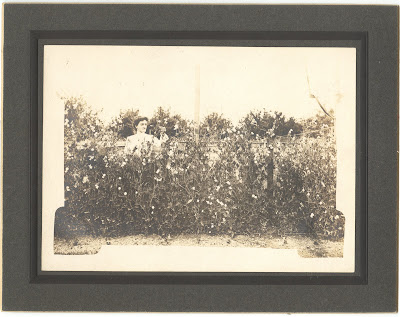 Excellent news from the world of medical archives: the Oregon State Hospital is working to open a museum focusing on the history of the institution and mental health treatment in Oregon. We got a call today from museum coordinator Kylie Pine, who is reaching out to other institutions that might hold pieces of the hospital's history.

One of the individuals of interest to Pine is Clara Montague Davidson, M.D., who interned at the hospital around 1894. The 1898 Oregon licensed physicians register indicates that Clara was still in Salem that year, but at some point before 1903 she moved to Newberg, OR, and opened a general practice. This photo shows Clara in her Newberg garden in 1903; she died in 1905.

According to information supplied to OHSU Librarian Margaret Hughes by Martha Montague in 1971, Clara was born in Vancouver, WA, in 1863, and married James M. Davidson in 1882. After her daughter Genevieve died in 1889 "of some mysterious fever - probably meningitis" Clara was "moved" to the study of medicine. The catalogs for the University of Oregon Medical School indicate that Clara was a student here for the 1890-91 session - along with a student called James Davidson, but it's unclear to me whether that was her husband James. Another classmate of Clara's was Esther Pohl Lovejoy, whom regular readers know went on become the second woman to graduate from UOMS in 1894.

After that one session, Clara leaves Portland and matriculates at the Woman's Medical College of Pennsylvania (now Drexel University College of Medicine) whence she graduated in 1893. She returned to Oregon for her internship at the Oregon State Insane Asylum, as it was then called. Why did she leave UOMS? The Woman's Medical College was well known and well respected and had been educating women physicians since 1867. Could she have thought that she would be more comfortable at an all-female school? That her education at Pennsylvania would be of a higher quality? Would her classmate Esther, who has written of the gentle teasing she encountered at UOMS, also have considered transferring to the Woman's College if she had had the funds?

We may never know the answer to the question of why Clara moved to Pennsylvania, but we may have a clue as to why she came back. An interesting piece in our Biographical File on Clara is an article she wrote for the magazine The Saturday Night circa 1894, in which she relates the story of a poor shopgirl she treated during her time in Philadelphia. She writes of one of her trips into "the sweater's district," which she calls "the worst part of the city." She notes that "although the 'doctor lady' is always respected even in the worst quarter, yet my heart failed me as I thought of the narrow streets, the dark underground cellars, and the drunken, cursing men and women I would have to meet." Although, come to think of it, experiences such as this may have made Clara especially suited to an internship in a psychiatric hospital.
Posted by Sara Piasecki at 12:06 PM 1 comment: Links to this post