Conflict always makes good news and conflict making the news at the University of Oregon Medical School was no exception, in fact, it was the rule. Any who have followed the blog or view the online exhibits, have read about a few; and since in this blog, I am writing about what was written in the news, conflicts will undoubtedly come up. This does not speak ill of the institution but illuminates the spirit of perseverance in the face of adversity that has seen the University through all manner of difficulty.

The building of the University teaching hospital on the hill, presented a conflict of interest concerning the University mission first envisioned by the second dean of the school, Kenneth A. J. Mackenzie. His vision was a medical school perched high above the pollution and hub-bub of northwest Portland, dedicated to education, to providing health care to the people of Oregon and to encourage research. Two current policies of the school were first, to maintain a volunteer faculty made up of private practice physicians who provided teaching without fee and secondly, the admittance to the hospital of non-revenue producing patients who, by their presence, supported the school's philosophy of instruction.

In 1955, just before the dedication of the new hospital, news reporters began to pick up on a quarrel that was taking place between the Oregon state board of higher education and local medical societies. As was reported, this argument was not unique at UOMS but existed nation-wide. The root of the problem was that medical schools, to date, had relied solely on volunteer teaching provided by local practitioners. UOMS was no exception. The state board of higher education was suggesting, no not just suggesting, it had proclaimed a "policy of replacing volunteer staff with full-time staff in key positions." This trend could be seen at other medical schools and had previously taken place in schools of law, but private practitioners balked at the idea.

The hitch was that the most qualified physicians could not obtain university salary scales comparable to what was possible in the private sector. Dr. John Richards, Oregon's Chancellor elect at that time, had conducted a survey soliciting responses from medical schools throughout the country that showed that instructors were being employed on a "geographic full-time basis"; a phrase that meant that instructors were allowed to use clinical space at the university in order to conduct their private practice to supplement their academic salary.

Those who were proponents of this arrangement pointed out that the most qualified would be drawn to teaching and that the population would still have access to his/her substantial skill. Private practitioners, however, who wished to remain only in private practice and provide service without fee to the school, questioned the "propriety of competition in private practice by a paid member of the medical school staff". The suggestion made by the opponents to this geographic full-time basis arrangement was that if full time paid staff wished to continue in private practice, they should be required to set up their offices off the hill.

The stand taken by the Oregon state system of education was that faculty members should be allowed to set up private practice at the University, thus allowing students direct access to a wide range of patients. Those physicians would be required to be available at all times for academic service, as well as pay for their own supplies, materials and secretarial services.

But besides the conflict of teaching theory and economic interest, the state board had decided to provide for some paying patients at the hospital; the so called "ugly head of socialized medicine" was rising. The school did not expect to fill its full time positions without the inducement of pay and the opportunity to run one's practice on site. The Medical society felt that allowing paying patients to be treated in the hospital (a tale for another day) would be the "tail that wags the dog". But legislators were in search of revenue and a self-supporting hospital seemed logical. This was already happening in other parts of the country. But Oregon was not so keen on the idea of the school entertaining revenue-producing patients.

Could there be a meeting of minds that would bring the state's system of higher education and the members of the medical society together?

Posted by Karen Peterson at 1:00 PM No comments:

A small but tasty accrual to the Dorothy Mann Robinson Papers appeared on my desk this week, battered, bent, covers off, extra-illustrated, and marked up on virtually every page. Is there a book like this in your personal collection? Perhaps it has its spine broken, dogeared pages, maybe some stains on it...? Yep, we're talking about a cookbook--and a very successful one, to judge by the use it has seen over the past 56 years.

This cookbook is of particular interest for us, not only because of its owner but because of the condition of its publication. In 1954, the Oregon State Nurses' Association (now called the Oregon Nurses Association) was celebrating its 50th anniversary, and put out a call to members for contributions to a celebratory cookbook. The members--who were primarily women and therefore, in true 1950s style, usually homemakers as well as professionals--responded enthusiastically. Recipes poured in to fill the various sections. In another hallmark of the era, we find separate sections on "Cakes, cookies and frostings," "Candies," and "Desserts." More indicative of their roles as healers, the nurses included information on a number of special diets, including"Low Fat Gallbladder Diet," "Ambulatory Ulcer Diet," and "Low Residue Diet." Mmm, low residue.

On page thirteen, we are treated to a recipe from a prominent member of the University of Oregon Medical School Dept. of Nursing (now the OHSU School of Nursing). Henrietta Doltz, RN,was serving as Director of the Dept. of Nursing when she submitted this recipe for Pancakes. 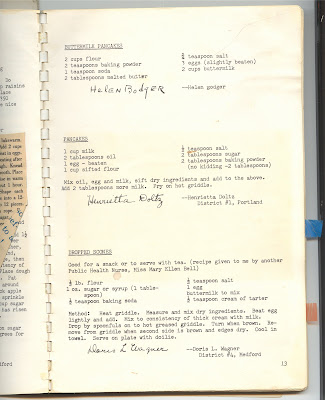 Posted by Sara Piasecki at 12:45 PM No comments: 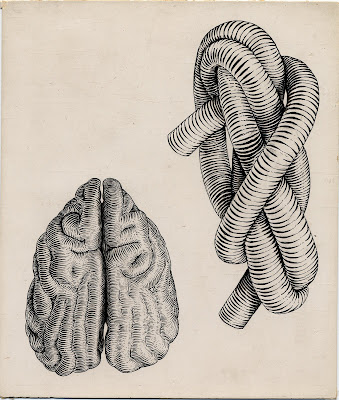 Of course, you can't actually meet Clarice Ashworth Francone in person, since she died in 1981, but you can see the collection in person this week, as we have pulled it out and spread it around for the arrival of attendees of the annual conference of the Association of Medical Illustrators. As we mentioned earlier, the group is meeting here in Portland this week, and we'll be hosting the first small group of them this afternoon.

As you also know, we've mounted an exhibition of reproductions of Francone's work in the main lobby of the OHSU Library for visitors who can make it to Marquam Hill but maybe only outside of HC&A hours. Now, for those of you who can't make it to campus at all, we have the text of the exhibit brochure and a gallery of selected images available on our website.

Shown here is one that, in part, illustrates (pun intended) an old training exercise that Max Broedel used to set his students: sketching and resketching a coiled tube to help develop skill in perspective.
Posted by Sara Piasecki at 10:57 AM No comments: 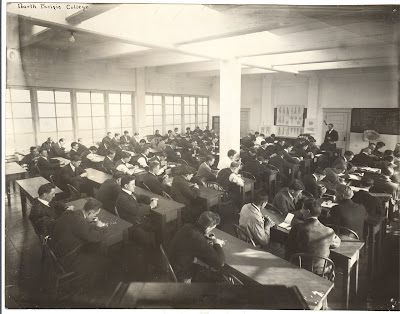 Working through yet more fantastic materials from the OHSU School of Dentistry vault, and beginning (as reward for hauling it up) with the pretty print photographs, we find mesmerizing image after mesmerizing image. This one caught my attention because of the piles of white powder in front of each student at the tables. It looks rather suspicious until one notices that the students are carving blocks into forms--tooth forms, as outlined in the large illustrations tacked to the front wall of the classroom. And so we can say that this was prosthodontics class at North Pacific College, probably between 1910 and 1930.

And check out the large model also against the front of the classroom. Lower teeth, or funky barstool?--you decide! (Click on image for a larger version)
Posted by Sara Piasecki at 12:17 PM No comments:

The hunt is afoot in the Medical Museum Collection, as we here in Historical Collections & Archives team up with artist Beth Robinson for what promises to be an exciting and innovative project for both the institution and the hunters.

As she announced on her blog this weekend, Robinson will be leading a group of artists in a "structured scavenger hunt" for objects in the collection, which will then be reinterpreted or "recreated" into new pieces to provide new "solutions." The resulting artwork will be shown in the Hoffman Gallery of the Oregon College of Art & Craft in July 2011.

Part of the "structure" is that a pool of objects will be preselected for the hunt, to ensure that the objects chosen are sturdy enough to hold up to inspection and handling. You'll probably be hearing more about that process in this space as we move through the fall, so stay tuned. (I for one hope somebody picks the cataphoric vaginal electrode.)

By the way, regular readers might remember when Robinson first visited us back in July of 2009; I still carry some of her excitement about our materials with me whenever I venture into the realia...
Posted by Sara Piasecki at 1:20 PM No comments: