Marion County Gets New University of Oregon Dental School!
No, not really. Just a little Friday humor. But it could have been true if a law instituted in 1907 was upheld in a Supreme Court decision. The law held forth that all state facilities built after 1907 must be established within Marion County. In 1954, the construction of the University of Oregon Dental School, on the Marquam Hill campus, was halted while a legal battle ensued regarding whether the dental school was a state facility and if it was, could it legally be located on Marquam Hill; or would it have to, by law, be located somewhere within Marion County.

The Oregon State Board of Higher Education had approved plans for the $2,200,000 facility on Marquam Hill, and bids had been agreed upon when everything came to a complete stop. Two issues were at stake, location and autonomy. The suit came from the State Dental Association against the State Board of Higher Education. The Dental School Advisory Council, made up of members of the State Dental Association, was adamant that the school not be administered under the control of the University of Oregon. Construction could not move forward until the Supreme Court granted continued autonomy to the Dental School; this would give the board complete freedom to go forward with the new building project in Portland and not in Salem, Aurora, Eugene or any other number of cities in Marion County.

Why all the falderal over location? What information was offered in the defense of the school's continued operation in Portland and continued autonomy?

Well, first of all, dental education in Oregon began before the 1907 law was instated.

It began in 1899 when the North Pacific Dental College was established in Portland in an ornate structure on 15th and Couch Street. In 1912, the school moved to a modern facility at SE 6th Avenue and Oregon Street; but by 1954 the equipment had become outmoded and the building dangerous. It was feared that the building would go up in smoke, as had the first University of Oregon Medical School building in NW Portland in 1919. Many of the faculty were loathe to teach or practice in the building and many thought that if it were necessary to wait, perhaps another four years, until a decision was made as to where the new facility would be located, there might not be a dental school left at all. It was this specific institution that was proposed to be rehoused in the new facility on Marquam Hill.

In the mean time, in 1945, the state legislature passed an act allowing them to take over the North Pacific Dental College. They did so and added it to Oregon's system of higher education under these terms: "There is created a new department in the higher educational system of the state of Oregon, to be known as the dental school of the University of Oregon, and said dental school shall be a distinct and separate department of said educational system, but shall be under the jurisdiction, management and control of the board of higher education and it's successors." Nothing said here as to the school being a state facility.

Besides the above stated terms, the major defense for autonomy was that the NPDC had always been an autonomous institution before the school was gifted to the legislature, therefore, was not a "new institution" and was not considered a state facility, therefore was not required to abide by the 1907 law. If we remember, the law stated that, as of 1907 no new state institution would be allowed to be established outside of Marion County.

But then there was another rub, the name of the school: the NPDC had agreed to carry the name of the University of Oregon. Judge Walter Tooze, officiating in this case, agreed that the school was under the direct jurisdiction of the State Board of Higher Education and deemed that the school's name was only a nominal issue. The Dental School Advisory council wanted to carry the name but wanted complete autonomy just as the medical school was operating as the University of Oregon Medical School, with autonomous jurisdiction over staff, administration and degrees.


So, we know the rest of the story. The year 1956 saw the inauguration of the new building of the University of Oregon Dental School on the Marquam Hill Campus, and here it remains. We know it now as the OHSU School of Dentisty.

Posted by Karen Peterson at 3:00 PM No comments:

Another opportunity to provide input to the Oregon Encyclopedia is coming, this time to the mid-Willamette Valley. Linn-Benton residents, take note! Now is your chance to brag about local notables, important events, and even your favorite local fauna and geographic features. Mary's Peak, anyone?

Of course, we hope that someone will take up the cause of medicine. Perhaps the history of Corvallis' Good Samaritan Hospital? Notable physicians from the area? Olof Larsell's The Doctor in Oregon contains 10 pages on the history of medicine in Linn County, but only three pages on Benton County. Looks like you have some catching up to do, Benton residents!

Text of the official announcement below:

Contribute Your Knowledge of Local History to the Oregon Encyclopedia.

Learn about the valuable historical resources available at the Albany Public Library, including an overview of on-line resources such as historic maps, photos, newspapers and biographies. Contribute your knowledge of local history and culture to The Oregon Encyclopedia (OE), an online resource about the state's significant people, places, events, and institutions.
Visit The Oregon Encyclopedia at www.oregonencyclopedia.org

OE Editor-in-Chief, Linda Tamura, will lead a discussion on how to write an Encyclopedia entry and will work with participants to identify local topics that should be included in The Oregon Encyclopedia.

This meeting is free and open to the public. Light refreshments will be served.

The Oregon Encyclopedia is a partnership between Portland State University, the Oregon Historical Society and the Oregon Council of Teachers of English. The meeting is supported in part by the Oregon Heritage Commission. This event is co-sponsored by the Albany Public Library.
Posted by Sara Piasecki at 1:59 PM No comments: 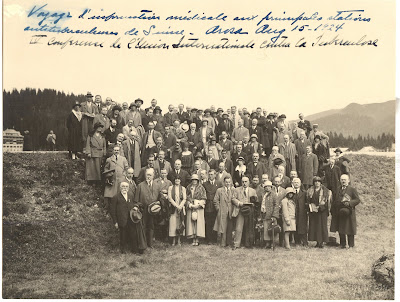 Rummaging around in the Historical Image Collection for something entirely unrelated today I chanced upon this image, a group portrait from the fourth conference of the International Union Against Tuberculosis (or as it was called by the French and the annotator of this photo, Union internationale contre la tuberculose). On August 15, 1924, the attendees had headed out to "inspect the principle tuberculosis sanatoria in Switzerland" and gathered together on this idyllic spot for a group shot. Of course, TB sanatoria were always in idyllic spots, since the primary treatment for TB in the 1920s was fresh air and rest, away from the contagion of cities.

Why would OHSU Historical Collections & Archives have this photo? Well, if you look very closely (click on the image for a larger version) and you've played along with our Game of Concentration at home, you'll recognize one of the Matson brothers down near the front, third or fourth from the left (depending on whom you consider to be in the front row). Long coat, bow tie, dark hair, jaunty smile. Now, without further research on their itineraries, I can't be certain if this is Ralph or Ray, but I'd guess Ralph.

For more on the Matsons, check out my article on them on page 12 of the April 2, 2010, issue of The Scribe, the newsletter of the Medical Society of Metropolitan Portland (now online!)
Posted by Sara Piasecki at 1:56 PM No comments:

July (for the many of us on fiscal years that run July-June) is National Navel-Gazing Month. This is the fourth installment in our annual report series (diehards may wish to compare and contrast with 2009, 2008, and 2007). If you have any questions, let us know (imponderables like "Where did the time go?" and "Was that really only eight months ago?" will not be answered satisfactorily, so you might want to keep those to yourself.) As always, these are highlights only; for more on the nitty-gritty, we suggest you browse through the blog archives on the left.

Patrons
Answered questions from 200 unique patrons, 90 of whom were OHSU faculty/staff/students
(up from 162 unique patrons in 2009)

Administrative
Increased footprint for collections: new shelving installed in BICC107; some archival materials relocated to Mackenzie Hall vault; additional space in Old Library stacks designated for PNW Archives and OHSU-Only collections
Increased staffing with the help of Jeff Colby, Circulation staff member, who is now working 20 hours per week in HC &A (up from 12.5 hours)
Developed procedure for loan of non-circulating materials to OHSU faculty
Posted by Sara Piasecki at 8:12 AM No comments:

Edgar Buchanan: the frontier dentist who played one on TV 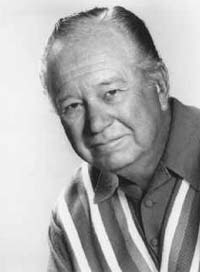 The character actor Edgar Buchanan (1903-1979) was widely recognized by American audiences from the 1940s through the 1970s, gaining fame with his roles in scores of Hollywood Westerns and the long-running television series Petticoat Junction. Several movies featured Buchanan as a frontier dentist; one such film was Texas (1941), in which Buchanan played Doc Thorpe in an ensemble cast that included William Holden, Glenn Ford, and Claire Trevor. When the movie opened, "practicing dentists throughout the country responded appreciatively," according to Arden and Joan Christen, authors of a recent article about Buchanan in the Journal of the history of dentistry (2001 July; 49(2):57-61).

Buchanan's portrayal of the dentist Doc Thorpe was imbued with vivid realism for the simple reason that Buchanan was, in fact, a dentist. Had been since 1928, actually, when he graduated--you guessed it--from the North Pacific Dental College (now called OHSU School of Dentistry). Edgar was the son of the well-respected Eugene dentist William Edgar Buchanan, Sr., DDS, a 1906 graduate of the Kansas City Dental School who settled in Oregon around 1910. Buchanan Senior was no fan of acting; according to the Christens, he believed that "to choose a career in the theater was to settle for a life of mediocrity and uncertainty" and he discouraged his son's acting ambitions at every turn.

Nevertheless, young Edgar took courses in theater at the University of Oregon while a pre-med student, and appeared with Henry Duffy's Stock Company in Portland while studying at NPDC. He was involved in the founding of the Portland Civic Theatre, and finally left dental school to take a position in the drama department at UO. His father intervened and convinced Edgar to return to NPDC to complete his dental education. There, he fell in love with classmate Mildred Spence, and Edgar and his wife both graduated with degrees in 1928.

Moving back to Eugene, Edgar and his wife opened a private practice. From 1930-37, Edgar was chief of oral surgery at the Eugene Hospital Clinic, but managed to find time to hold a position as assistant director in the UO drama department and to found the city's Very Little Theatre. In 1939, the couple relocated to Pasadena, where Edgar finally got his big break when talent scouts saw his performance of a senator in Maxwell Anderson's "Both Your Houses."

The rest, as they say, is history. Edgar appeared in hundreds of films and television shows, and while he continued to provide emergency dental care on sets and attend the occasional continuing education course, he turned the family practice over to his wife Mildred. Edgar died in 1979.