Rudolph E. Kleinsorge, MD - 1883-1975
Iowa Born and Bred - Becomes Historic Figure in Oregon
Those of you, who are regular readers of the "Stories from the Clippings" segment of our blog, might remember last Friday's entry about Dr. William Burroughs Holden, Veteran Healer of Mankind's Ills. I happened to mention that he was the second ever honorary alum of the University of Oregon Medical School. If you have been curious as to who might have been the first, I have your answer. The announcement was an historic moment in the 41-year history of the UOMS Alumni Association.

The honor was proclaimed in a letter to Dr. Rudolph E. Kleinsorge in 1954, written by Dr. Howard C. Stearns, then president of the university Alumni Association. Dr. Stearns stated that Dr. Kleinsorge was chosen because of "the many contributions [he] made to [his] profession, to the people of [his] community and to the commonwealth of Oregon as a physician and as a member of the Oregon State Board of Higher Education." Dr. Kleinsorge's career as a physician spanned 60 years.

He was a 1908 graduate of the University of Iowa, working his way through school as an assistant to the head of the physiology department and eventually became an instructor of physiology at Iowa. He also pursued graduate study at Harvard under the tutelage of Dr. Walter B. Cannon, revered physiologist.

The son of a circuit-riding preacher, he was accustomed to moving from place to place; but when he settled, he settled for good. He had determined that once he found a place he liked, he would stay there for the rest of his life, and that's just what he did. He moved to Silverton, Oregon in 1909 and he and his wife, Nina, built a home and an internationally recognized garden, while he established his career as "an old style doctor".

There were no hospitals in the area when he began his practice, so he traveled about by sleigh and horseback, practicing in people's homes. The terrain was rugged; even after obtaining a car it was, of necessity, reserved for summer use only. A hospital was established in a residence in 1918 that served Silverton until a 45-bed hospital was raised in the early 1930s. Dr. Kleinsorge dedicated his life as a physician to the people of Silverton.

In 1941, Dr. Kleinsorge was appointed to the Oregon State Board of Higher Education. He served on the board for18 years, twice as president and 12 years on the Building, Grounds and Capital Outlay Committee, becoming chairman in 1943. During his time as a member of the OSBHE building committee, Oregon saw many educational facilities established. Among the most notable is the UOMS Hospital on the Marquam Hill campus.

Dr. Kleinsorge found time for professional and civic service. He was the past-president of the Marion County Medical Society a member of the Silverton School Board and held memberships in Sigma Xi, Alpha Omega Alpha, the Rotary, serving as past president, the Masonic Lodge, the Shriner's and the American Medical Association. Last but not least, he was a veteran of WWI.
In an interview in 1969, with a staff writer of the Oregonian, Kleinsorge said that he had no regrets. "If I was to do it all over again at 25, I would do the same things over again. It was the most satisfying thing a man can do, he said, to practice like we practiced."

So, it seems that the UOMS Alumni Association made a wise choice in honoring Dr. Kleinsorge. So, this brief and incomplete recounting of the accomplishments of this remarkable man must suffice for now. It's only a blog post.
Articles referenced: f1_p47_a12-13
Posted by Karen Peterson at 3:00 PM 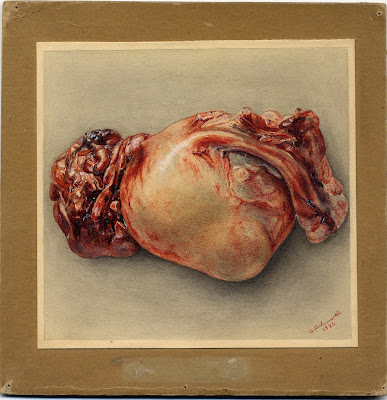 If you're reading this post between 2:30 and 4:00 pm PDT on July 8, 2010, it's not too late to rush over to the Main Library lobby to see the archivist out of her native habitat: Karen Peterson and student assistant Ian Terrell are installing the newest exhibit of materials from the Historical Collections & Archives, to wit:

Beautiful Gross Anatomy: Clarice Ashworth Francone, Medical Illustrator
July-September 2010
OHSU Library
Francone (1901-1981) was the main illustrator for the University of Oregon Medical School from 1936 to 1969, and donated a large collection of her original drawings to the archives. All of these have been scanned, and many reproductions will be on display, along with copies of some of the major texts she illustrated: Structure and function in man (with Stanley Jacobs, MD); Atlas of hematology (with EE Osgood, MD); and Atlas of operative dentistry (with William Howard, DMD).

The online component of the exhibit will be available soon from the HCA web site. But it's going to be beautiful weather in Portland for the next few days, so why not take a walk over, or a tram trip up, to see it in person?
Posted by Sara Piasecki at 2:15 PM

Today, another trip down to the vault at the OHSU School of Dentistry and another cartload of items for integration into the historical collections, from human remains and siwak sticks to school publications to hundreds of photographs (print and negative). In the last of these categories, a particularly captivating image is "Mr. George Batterson's 'Pocket Board,'" shown below.

"Educational adviser" George E. Batterson was chair of the Department of General Education at the University of Oregon Dental School and served on the school faculty from 1946 to 1975. He received his master's degree in education from the University of Oregon in 1936. His master's thesis was titled "An analysis of examination items from three universities to determine the extent to which they call for the exercise of higher intellectual thought processes" (which I think may be a fancy way of saying that tests don't test much beyond rote memorization). He definitely exercised his higher intellectual thought processes in creating and implementing his "pocket" system for course schedule maintenance. Very elegant, very easy, very analog--which are all qualities we prize. 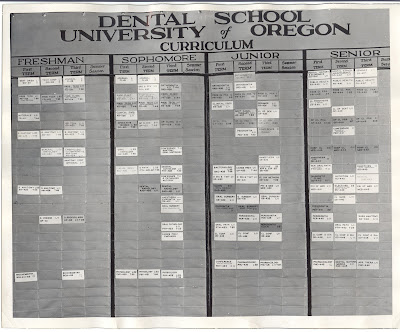 Click on the image for a larger version to see what courses were required at UODS in the 1960s.
Posted by Sara Piasecki at 2:00 PM

Save the Date: Kimberly Jensen and the Suffrage Players at Cornelius Pass

Two weeks hence--when it may very well still be the beautiful Oregon summer that it is, finally, today--come on out and celebrate the sunshine and the centennial of women's suffrage at the McMenamins Cornelius Pass Roadhouse.

Details:
"Oregon Women Vote: What's Suffrage Got To Do With It?"
What: Oregon Encyclopedia History Night
When: July 20, 2010, 5:30-8:30 p.m. (history program at 7:00)
Where: McMenamins Cornelius Pass Roadhouse, Hillsboro, Oregon
Who: Presented by Kimberly Jensen and the Suffrage Players

The event is jointly sponsored by the Century of Action: Oregon Women Vote, 1912–2012 Project and the Oregon Encyclopedia. Scholar (and blogger) Kimberly Jensen will be leading the Suffrage Players in a reenactment of some of the key debates of the 1912 campaign. As the web site notes, "They might even sing."

Posted by Sara Piasecki at 1:36 PM