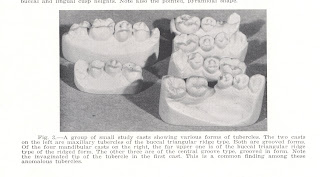 More lovely and interesting things are coming up from the OHSU School of Dentistry vault on a regular basis. (In fact, I've become so accustomed to making a trip down on Friday that I fear that when the vault is finally emptied, I'll come to work the following Saturday--not knowing how to reckon the end of the week otherwise.)

Today's fun highlight is of a collection of materials just recently donated by Lake Oswego dentist Ralph Merrill, D.D.S. In 1964, while at the Henry Ford Hospital in Detroit, Merrill published the results of his research into "Occlusal anomalous tubercules on premolars of Alaskan Eskimos and Indians" (Oral Surg Oral Med Oral Path 17(4):484-496). Noticing examples of this anomaly in his practice at Henry Ford, Merrill set out to survey the literature and locate specimens in order to describe the clinical and histopathological characteristics of the condition for American audiences, and to suggest practical approaches for diagnosis and treatment.

Dr. Merrill donated to the dental school the materials gathered in the course of this research, including models (one shown here in an illustration from the article offprint), 35mm slides, radiographs, and histologic slides. In addition, he donated a really beautiful framed replica of a section of the Edwin Smith Papyrus describing the technique for popping a dislocated jaw back into place (handy to know!).

Finally, we received a lovely case of instruments (shown below) which opens in so many ways that there are over 250 individual items inside. Our long suffering student, Ian Terrell, went through each and every one to compile a complete list--which is, of course, available upon request. 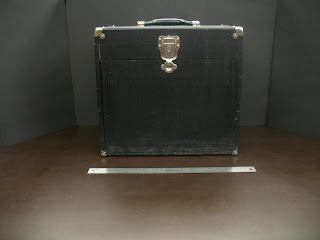 Posted by Sara Piasecki at 2:45 PM No comments:

Hot off the presses! 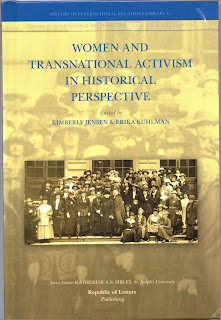 We are just today in possession of a brand new text highlighting the work of OHSU alumna Esther Pohl Lovejoy, M.D. (Look, there she is on the cover! Smack dab in the middle! Wearing, as always, a great hat.)

The book, Women and transnational activism in historical perspective, is a collection of essays edited by Oregon's own Kimberly Jensen, PhD, and Erika Kuhlman, PhD, and is issued as volume 14 in the series History of International Relations, Diplomacy, and Intelligence (I'd make a comment here about those three things often being mutually exclusive, but...)

"Transnationalism" in this context is defined as "a school of thought that takes the interconnectivity of people around the globe and the flow of people and ideas across national boundaries as its starting point"; in the Introduction, the editors explain that transnational historians "explore international nongovernmental organizations, immigration and migration, international conflicts, disease and pandemics, theoretical approaches such as feminism, Marxism, and postmodernism, and a host of other aspects of human history that transcend national borders."

Given this context, Esther Pohl Lovejoy seems a natural topic for inclusion--and indeed she is, in Jensen's lucid essay "Feminist transnational activism and international health: the Medical Women's International Association and the American Women's Hospitals, 1919-1948." In fact, the article is a version of Jensen's presentation given during the summer 2008 Portland exhibition of the National Library of Medicine's Changing the Face of Medicine: Celebrating America's Women Physicians (program still online here; podcast available here). Lovejoy was a major force behind both the MWIA and the AWH, and Jensen deftly places the work of those two groups into the transnational perspective.

The collection includes nine essays on women and transnational activism, and offers a little something for all readers (women in medicine buffs take note: the final essay is about Martha Eliot, MD):

Localizing the global: the YWCA movement in China, 1899-1939 / Elizabeth Littell-Lamb

How to "make this Pan American thing go?": interwar debates on U.S. women's activism in the Western Hemisphere / Megan Threlkeld

"I knew the kind of work that was done for children": Dr. Martha Eliot and the Origins of UNICEF / Jennifer Morris

This text will be cataloged and made available for checkout from the OHSU collections soon. This copy being almost literally hot off the presses, WorldCat has no additional library holdings yet; the book is available through Amazon.
Posted by Sara Piasecki at 1:13 PM No comments:

Ghost of the machine 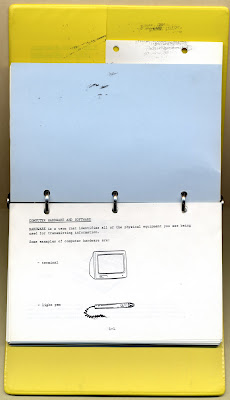 Often it seems as though time moves at variable speeds in different disciplines, and nowhere so fast as in computer technology. Why, I remember as if it were yesterday a trip to a West Coast college in the 1980s when I saw my first computer lab: a room full of terminals where nearly everyone was playing MIST. Life seemed simpler then.

Take, for example, a 1989 edition of the user guide for A2K, recently donated to the archives by an historically-minded hospital staffer. An early model of an electronic records system, A2K is still in use in clinical settings around the country. It included patient indexing, case reporting, and financial and insurance information management.

In 1989, the user guide for new software needed to spell out a few things that would seem glaringly obvious to today's youth. Chapter 1 of this A2K guide, "Computer Hardware and Software", includes helpful line drawings of such oddities as "Terminal," "Light pen", "Keyboard," and "Printer."

In an early indication that computers sometimes don't behave the way you want them to, Chapter 2, "How to Sign on," has the instruction "Press PF22 to access the sign-on screen. You may have to press the ALT or CNTRL key as well." Modern users know that this direction could easily be expanded to: "Then try rebooting the machine. Then try checking all the wiring connections. Proceed to cussing."

The chapters on system architecture and software functionality provide a useful peek into the early development of the EMR, and are a welcome addition to our collection.
Posted by Sara Piasecki at 8:12 AM No comments: 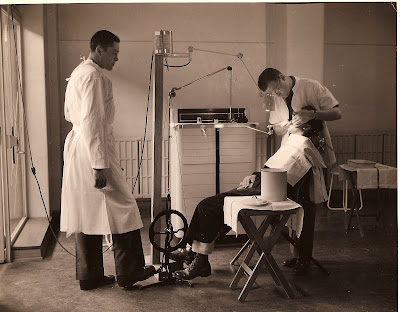 One of the items we recently received from the OHSU School of Dentistry Vault o' History was a large cardboard box labeled "Herbert and Horace Miller." These two dentists, father and son, were key figures in the development of the dental school. Herbert was one of the original incorporators of the the Oregon College of Dentistry in 1898. He became the second dean of the North Pacific Dental College after the two schools merged, serving from 1901 to 1924 and again from 1942 to 1945.

Herbert's son Horace graduated from North Pacific College in 1924 (driving his father into retirement?) and then joined the school's faculty as professor of oral surgery. Horace was keenly interested in tooth transplantation and--not surprisingly--the use of local anesthetics in dentistry. The cardboard box contains several smaller boxes filled with 35mm slides of his research and clinical cases, as well as five 16mm films of surgical procedures (I believe; the cans aren't well labeled).

The bulk of the box contents, however, pertain to Horace's world travels. Having served with the U.S. Army Artillery in the First World War, Horace was appointed a major in the U.S. Dental Corps in 1941; he eventually achieved the rank of lieutenant colonel. He spent most of the war overseas in Australia, where he was Chief of the Dental Section. He lost no time in making connections with his Aussie colleagues; a notice published in the August 1945 issue of the Journal of the American Dental Association reported that "in 1942 and 1943, the Victoria Dental Association of Australia held 'American' nights, when the entire program was presented by" Yanks, and that "an interallied dental meeting is held every month in Townsville, Queensland." Horace was an active participant in these events, and did research on the local clinical facilities and Australian dental education to bring home for his fellow faculty at NPC (which was the University of Oregon Dental School by the time he returned).

The traveling bug had bit; Horace would go on to attend numerous international conferences over the course of his forty-some-year career at the dental school. A memo from Dean Harold Noyes to the school faculty, dated Sept. 6, 1955, invited the whole group

to a program of slides and discussion by Dr. Miller on September 13, when he will discuss his last summer's trip through Europe and impressions gained through visits to Dental Schools in England, Norway, Sweden, Germany, Switzerland, France, Italy, Belgium, and Holland. Everyone will find of special interest, I am sure, Dr. Miller's evaluation of the differences in philosophy of dental education prevailing between different countries in Europe and between Europe and Schools of Dentistry in the United States. Also, the success that European schools have had with the education of women dentists, and the relative emphasis on Diagnosis versus Dental Skills, and the general level of Dental Graduates' capacities will pique our interest.

Some of Miller's travel slides, photographs, correspondence, writings, and ephemera were collected into a large scrapbook, and more materials were just tossed into the box alongside it. A few of those images are shown here. I'll let you be the judge of which, as Noyes wrote, "depict the education process in Europe" and which "display the beauties of old-world romanticism".... 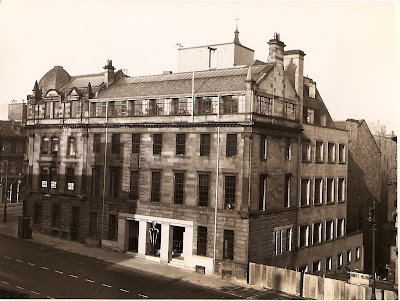 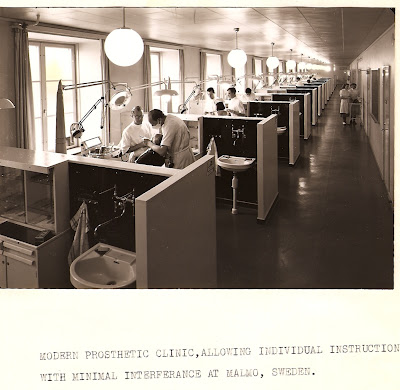 Posted by Sara Piasecki at 2:46 PM No comments: