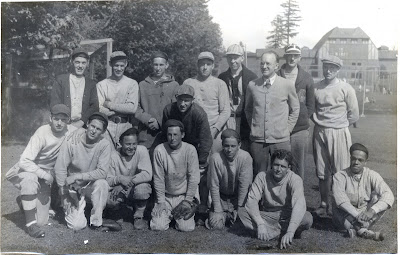 To some people, Memorial Day means baseball, so we send you off into the long holiday weekend with an image of the North Pacific College baseball team circa... what do you think? Nineteen twenties? (To me, the holiday means car racing, but that wasn't a common collegiate sport).

As a reminder, Historical Collections & Archives will be closed on Monday May 31. See you on Tuesday--and have fun out there!
Posted by Sara Piasecki at 7:24 AM

So I've been reading about Dr. DeNorval Unthank, M.D., whom I had mistakenly believed was Portland's first African-American physician. Turns out that one J.A. Merriman, M.D., had set up shop in Portland in 1903 and that he was joined in 1909 by Stanley Lucas, M.D., a native of Kingston, Jamaica. We read briefly about Merriman and Lucas in The history of Portland's African American Community (1805 to the present), written in 1993 by the Bureau of Planning of the City of Portland. We also learn that Hugh A. Bell, D.M.D., and Elbert Booker, D.M.D., were the city's first African-American dentists, arriving in 1924 and 1927 respectively.

I had wondered what persuasive power could have brought Unthank to Portland in 1929, just three years after Oregon had finally amended its constitution to allow blacks to permanently settle here, and seven years after W.M. Pierce had made it into the governor's mansion with the overt support of the Ku Klux Klan.

In 1929, Merriman had almost certainly started to consider retirement (he appears to have retired in 1931). A 1902 graduate of Rush Medical College, he must have recognized the deep need for a black physician to care for the city's black population of about 1,000 souls. Unthank, a graduate of Howard University who had taken postgraduate training at Kansas, must have respected and heeded the advice of such an esteemed colleague. What might Merriman have told Unthank to get him to agree to come? "It's not that bad"? "You'll have about 1,000 patients that will be yours alone to treat"? "The fishing is really good"?

And what would have possessed Merriman to come West from Rush? A notable medical university, Rush was graduating doctors who were going on to positions of prominence in their communities--including Portland (A.D. Bevan being a great example). Did a fellow Rush alum bring Merriman out to tend to the blacks, who could not be treated in white hospitals at that time? The History at least gives us some idea of why Stanley Lucas came to the city: he had been hired by the Northern Railroad Company, which presumably had a number of African-American workers.

In the face of not only discrimination but often violent harassment, these men stood by Portland's small African-American community and provided desperately needed health care services. It's truly remarkable.
Posted by Sara Piasecki at 12:41 PM

Two significant additions to the History of Medicine Collection

The unseasonable rain cannot dampen our spirits here today: we have received two lovely new items for the History of Medicine Collection, and both are in beautiful marbled boards. (My great aunt was a fantastic marbler of Easter eggs, and with the early spring weather out there, I can almost imagine it is still March....)

The first of these is Carl Wernicke's landmark text on aphasias, Der aphasische Symptomencomplex (Breslau: Cohn & Weigert, 1874). Of the three types of aphasia described in the essay, one now bears his name: Wernicke's aphasia is considered a "fluent" aphasia, which results in sufferers often uttering long sentences which have no meaning or syntax. Wernicke first described sensory aphasia and localized the parts of the brain responsible for its symptoms. This is the only book by this important neurologist (so far!) in the OHSU collections, and the only copy of this work now held by the Oregon-Washington academic library consortium, the Orbis Cascade Alliance. 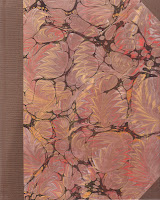 The second work is another classic of neurology, written by the 19th-century physiologist Marshall Hall, Synopsis of the diastaltic nervous system (London: Mallett, 1850). OHSU also holds Hall's Lectures on the nervous system and its diseases (Philadelphia: Carey & Hart, 1836), but the Synopsis is new to both us and everyone else in the consortium. In this Croonian lecture, delivered before the Royal College of Physicians, he summarized much of what he had discovered during the course of his long career in neurophysiology. Hall, who had coined the terms "reflex action" and "spinal shock," had nevertheless seen several of his papers rejected by the Society over the years. In a preface to the small publication, he writes:

To treat fully of the infinite number of topics, which are here laid before the reader in mere outline, would occupy a considerable volume; and for such a volume, in the present condition of the profession, there would not be found readers; for--'Monographs do not sell'--that is, are not read. The present cheap, elementary, and compilative state of medical literature, will exclude, for a time, all original works. This Synopsis has been printed at my own expense.

I think we can safely assume that, were he alive today, Hall would have been a great champion of open access publishing...
Posted by Sara Piasecki at 1:30 PM

I've been left alone here to man the fort while the rest of our small but happy band has headed off for another round of training on Archivist's Toolkit, and I've been soothing my overloaded brain by sleeving some rather uninteresting photographs. (I'll spare you those.) A bout of monotony usually helps me transition between intellectually demanding writing assignments.

So, in an effort to salute others in our community who have likewise been expending their brain power to highlight the medical men and women of Oregon, I hereby give notice of the recent publication of the following articles in the Oregon Encyclopedia:

Stay tuned for another from Gaines, plus forthcoming articles on Aaron Lerner and Thomas Fitzpatrick by Lee Lewis Husk and on Robert S. Dow by Casey Bush.

If you haven't already read about Esther Pohl Lovejoy, Marie Equi, Bethenia Owens-Adair, Lena Kenin, and John Kitzhaber, then get on over to the OE and check 'em out.

Who isn't there who should be? Let them know, and suggest an author--or offer to write one yourself!
Posted by Sara Piasecki at 3:11 PM

Medical illustration on the brain

One of the events we've started to gear up for here is the annual conference of the Association of Medical Illustrators, to be held in Portland this summer, July 28-31. The conference theme is "Branching Out and Always Growing." OHSU Historical Collections & Archives will be welcoming the group to town with an exhibition of the works of Clarice Ashworth Francone, who was the medical illustrator for the University of Oregon Medical School, and, for many years, the only medical illustrator in the state. To prepare, we've begun digitizing all of the sketches in the Francone collection; once complete, the set will be made available online for scholars around the world. Pretty exciting, right?

To whet your appetite for the display, here are two of the images from the Brain folder within the Francone. Enjoy! 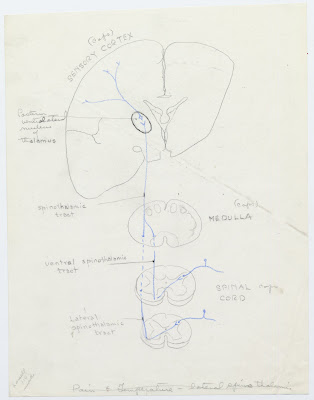 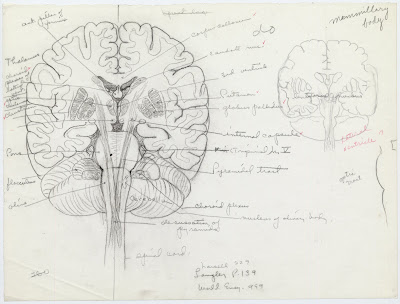 Posted by Sara Piasecki at 3:18 PM