Terrible, Treatable Tuberculosis
A wonderful, but woefully short, documentary on tuberculosis in Oregon, “OREGON EXPERIENCE: The White Plague”, aired May 17 and 18th on OPB. But if you missed it, don’t despair; you can view it in its entirety on their Web site. I was not only excited to see photographs and artifacts from our collections in the film, but also portions of an interview with our own Dr. Harold T. Osterud (1923-2004), a frequent visitor to the HC&A. As the film ended, it was touching to see a clip of Dr. Osterud climbing the steps of the Old University Tuberculosis Hospital, where as professor emeritus and former chair of the Department of Public Health and Preventive Medicine, he had his office. The film was dedicated: “In Memoriam - Dr. Harold T. Osterud.”

A related article in the Oregonian, dated August 1954, describes briefly a report written by Dean David W. E. Baird regarding the status of the patient population at the University TB Hospital on Marquam Hill. The report stated that the waiting list of patients had all but disappeared for the first time since the hospital's opening in 1939. It appears that early detection, due to improved x-ray diagnostics, the use of new antibiotic drugs, that arrested the disease, and the increased efficacy of surgical procedures, coupled with a reduced length of hospital stay, opened up more space to receive new patients with active TB. The statistics showed that the number of cases had not decreased, but were still on the increase at the time. Other interesting statistics were that housewives made up the largest population at the hospital, while 38 states, 14 foreign countries, a wide range of occupations and geographic regions and *races* were represented on the patient roster. (*Not my word.)

There is also an online exhibit available on our Web site titled: "Housing the Victims of the Great White Plague: The Oregon State Tuberculosis Hospital", which will point you to a good many other materials that are housed here in the Archives pertaining to TB in Oregon.

Another trip today down to the OHSU School of Dentistry vault! I can hardly wait to share with you the contents of the large box labeled "Herbert and Horace Miller"--but I'll have to, since my access to the stacks area where I parked the cart is being impeded by a secret casting call for some production. Nothing like milling actors to keep one safely at one's desk. 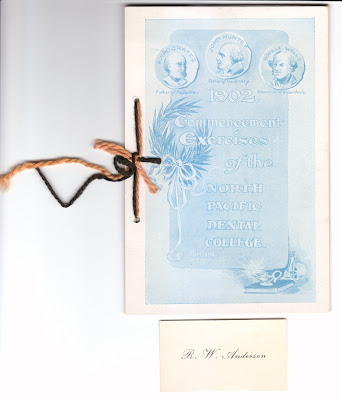 So, I'll start with what I was able to bring up to the History of Medicine Room proper immediately upon my return. After yesterday's revelation that "Mr. Five by Five" was a 1942 pop song, I feel compelled to follow up on the theme of dentists and music (wherein there is clearly some sort of pun about musical chairs, but I'll spare you). One of the items we retrieved from SOD today is a pristine program from the 1902 commencement exercises of the North Pacific Dental College, complete with the name card of its original recipient, graduate Robert Walter Anderson, D.M.D.

The event, held on April 13 at the First Baptist Church on 12th and Taylor streets downtown, had the standard speaking bits (annual address, conferring of degrees, charge to class, valedictory), and a rousing musical slate of contemporary numbers: "Rigoletto" opened, with Strelezki's "Forever Dear" following, then "Cavalleria Rusticana" and finally, selections from the "Daisy Chain" by Liza Lehmann. A hip program for the time. (But then, we've already seen that the dentists were 'ballers, so clearly they needed tunes to play by. I wonder if this year's music will include selections from Lady Gaga and Usher?)

Forty-one students, including two women, were graduated that year. Among the Class Officers listed on the final page are Donald Bruce Stuart, Class Prophet, and Everett Elijah Bailey, Historian. One wonders whether the names should have been reversed.

Bailey may have had something to do with the choice of historical figures to adorn the cover of the program: Hippocrates, "father of medicine," perhaps representing the DMDs, with John Hunter, "father of dentistry"--but also an important figure in the history of surgery--representing the DDSs. And they could hardly have left off Horace Wells.

Finally, the students' inclusion of the phrase "Esse Quam Videri" as the class motto may have been a nod to nearly anything--except, perhaps, Stephen Colbert. For that connection, we really will need to wait to see what this year's class does...

(And this is just one item, folks. I have a whole cartload of this material waiting in the wings!)
Posted by Sara Piasecki at 1:58 PM No comments:

One of the small boxes we brought up from the vault at the OHSU School of Dentistry last week contains a little collection of materials belonging to W.E. Dougherty, D.M.D. and Kay Patterson. The two attended North Pacific College together in the pre-war years: Dougherty graduated with his dental degree in 1942 and Kay Patterson received a certificate in dental hygiene that same year (illegally! as we learned last week).

The collection includes Datter yearbooks from 1941, 1942, and 1943 (all signed by various classmates; 1943 is also adorned with a sketch of Dougherty, called "Dr. 5 x 5"--if you know what that refers to, I'd love to hear it), photos, and correspondence pertaining to the class reunion in 1982. Some of the snapshots--all the small format that I associate with the 1930s and 1940s--are absolutely delightful. Here are a few, including Dougherty "the energetic dentist" (top); Kay, "boarding at Shelley's" (middle); and "tired hikers, NPC outing, top of Multnomah Falls" (bottom). Don't they all look cool and stylish?

(Click for larger version)
Posted by Sara Piasecki at 9:13 AM 2 comments:

I just happened to stumble back into an unprocessed collection that we received in 2008, the Howard Stanley Mason Papers (see this earlier post about the donation). At the time of receipt, I remember being most impressed with the one scrapbook containing lovely photographs of Mason's gentian plants (as you can tell, since I did mention it specifically in that earlier post).

What I had forgotten--or, more likely, overlooked in the excitement of a great new collection--was the wealth of material in the other bound notebooks, over thirty of them, chronicling Mason's work, travel, and activities. One, marked "Japan 1977", includes diary entries, clippings, photographs, correspondence, and ephemera collected during Mason's stay in Japan from March 19-May 10, 1977. This page, for example, holds two business cards and the very elaborate envelope in which he received an honorarium for a presentation: 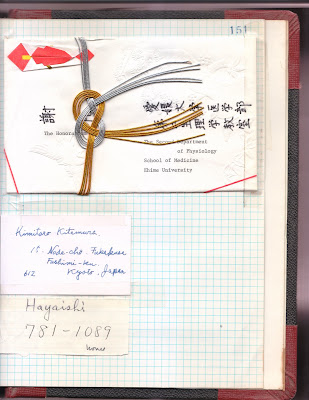 Mason had been working with colleagues in Japan since the 1950s, and his trip involved a number of stops in different cities meeting with groups of scientists--and equally many stops at gardens to meet with fellow gardeners. His outreach efforts were rewarded in 1988, when Mason became the first Oregonian to receive the Order of the Rising Sun, Third Class, for fostering scientific exchanges between the United States and Japan.

Even though the collection is not fully processed, we do have an inventory that was compiled at the time of accession. Happily, the papers were well cared for by Mason's family, and the materials are stable, so they can wait a little longer for full treatment. Researchers wishing to consult the materials can request a digital copy of the inventory for reference. (Between you, me, and the wall, dear reader, that might be what you'd call MPLP. I'll deny it if asked later.)
Posted by Sara Piasecki at 1:38 PM No comments:

TODAY and TONIGHT: All medical history, all the time

A reminder that today is the day for the last OHSU History of Medicine Society Lecture of the 2009-2010 season! Come and join us for this free presentation, with speaker Roger Alberty, MD, FACS, discussing Helen Taussig and the blue baby operation. (Complete details below.)

Also, the new Oregon Experience episode on tuberculosis treatment in Oregon premieres tonight at 9:00 p.m. on Oregon Public Broadcasting. White Plague, produced by Eric Cain, tells the story of the "historical impact of TB in Oregon"--and it features numerous images and objects from the Historical Collections & Archives, as well as interviews with physicians, patients, and others involved in the fight. See the OPB Oregon Experience web site for more details; the program will be available for purchase as a DVD after its air date.

Dr. Roger Alberty earned his medical degree from the University of Kansas School of Medicine in 1968. He arrived in Portland later that year for an internship at Good Samaritan Hospital. He went on to complete a residency in general surgery and a fellowship in peripheral vascular surgery at St. Vincent Hospital. He has been on the faculty at Providence St. Vincent Medical Center since that time, serving as chief of surgery from 1985-1986 and 1996-2007. In 2008, the Portland Clinic named their new surgical outpatient center in Tigard after Alberty, in honor of his thirty-year tenure with the clinic and his long service to the medical community.

The lecture is free and open to the public.
Posted by Sara Piasecki at 6:11 AM No comments: