photographs of nurses who, under the command of Colonel J. Guy Strohm, served in the 46th General Hospital alongside many physicians from the University of Oregon Medical School (WWII). It became quickly evident that some took offence at the exhibit poster. Besides a slash from a pen, a message declared, "I'm nobody's nurse". Sure, by today's standards, the title was not PC, but back in the day, I doubt that it would have raised an eyebrow. In fact, the original photograph album itself, created by women, proudly displayed this title. PC or not, these kinds of things are provocative, at the least.

So, some may be offended at the language used to describe Dr. Carolyn Taylor. I suppose that descriptions of professional women and their accomplishments, intermingled with chatter about their physical beauty, are relatively rare these days. But in 1954, a newspaper reporter portrayed Dr. Taylor like this. [While reading, keep in mind that she was one of the U.S. Army's first women doctors and a 1950 graduate of the University of Oregon Medical School.]

From a clinical standpoint, Carolyn Taylor is formed and figured like a serious candidate for a Miss America title, a condition that is much easier to diagnose than reasons behind her having become a doctor in internal medicine and a captain in the U.S. army.

The tall 28 year old Dr. Taylor has wanted to be a doctor since she was 3 years old… Dr. Taylor is unmarried, despite having had professional training in heart problems, expects to specialize in cardiac medicine when she enters private practice.

"Cardiac is the biggest killer - you don't have to worry about business," she laughed. And when she smiles or laughs it is enough to cause a dead man to jump out of bed.

Dr. Taylor recently enlivened a Fort Knox, Ky. ward of 35 enlisted men, all of whom swore they were ill.

Dr. Taylor took her army basic training with 400 males at Fort Sam Houston near San Antoinio Tex. It is possible that not since the Battle of the Alamo have so many soliers in the area felt the need of medical attention of the internal variety. But they got no help from the vivacious captain.

"I was too busy marching trying to keep in step, which is a problem when you are wearing a skirt. It was really sad". Dr. Taylor made a libalous remark about the designer of her uniform.

"All the men were marching boom, boom, boom in step and I was four steps behind going click, click, click, all because of a tight skirt," she explained after noting that she has long legs (she's 5"10")…

To be fair, I have to say that from the article, we also find that not only was she a beautiful heart breaker, with the body and face of a beauty queen, and a cardiac specialist, but she was smart too. She entered the University of Oregon at age 15 and stumped the experts on the TV show, "What's My Line". She was the first doctor in her family and one of a few female doctors in the Army at that time. She recalled that the Army had not been taking women doctors until 1951.

What can I say? This is how it was!

As you know, dear readers, we're all about physical stuff here, especially paper--lots and lots of paper. Of course, being Oregonians, we also know that trees are a renewable resource unlike, say, oil, but we understand that many of you out there might cringe at the thought of how many noble trees have gone into the making of the collections.

So, in the spirit of Earth Day, here are a sampling of some of the digital donations we've received--born digital, living digital, posted digital. Now go out and hug a tree (I recommend the huge old oak in front of Old Library, for those of you on Marquam Hill; he's a great beast and I think he likes the attention.) 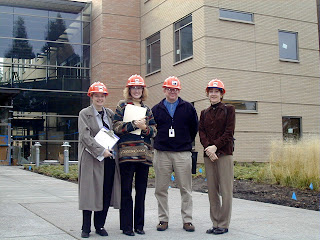 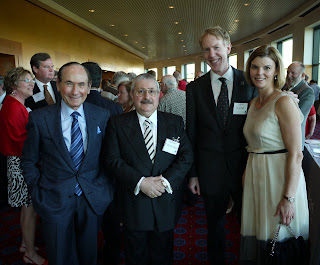 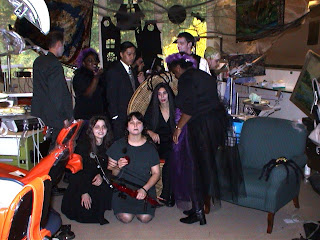 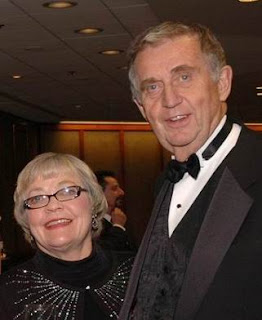 Shining through the grime 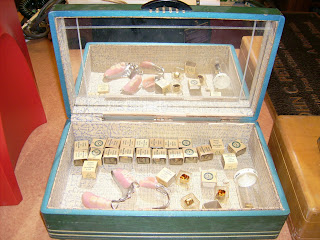 Archival rule number 23: On the day you accession the dirtiest materials, you will be wearing black.

Last week, another trip to the vault at the School of Dentistry revealed several oversize photographs in very dirty, very weathered, very treacherous frames, and ten new objects for the museum collection.

Shown here is my favorite of the objects: a gold crown kit which Dr. Clarke determined was before 1907 (when gold casting technique was developed) but after the need for individual swaging of gold foil began to wane. Each little 22k crown is in its own little plastic box, and each little plastic box has a cardboard sleeve. The set is in a wooden case painted blue-green and ornamented with yellow stripes. The mirror on the inside of the lid makes it seem like a girl's jewelry box (and with all that gold, what little girl wouldn't consider wearing the contents?). The crowns are by Isaac Masel Co., Philadelphia. You'll note that there are a few partials thrown in for good measure.

We also received a case full of burs for a handpiece, a mix of sets from SS White Dental Manufacturing ("Revelation" burs--a revelation for the patient, no doubt; they were so smooth!); Lee, Smith & Sons; and Rusch Co. The case is very similar to the one containing the gold crowns, only with a natural finish and red stripes. They may have belonged to the same dentist. Also thrown into that case are two dental spatulas, one for mixing cement and the other for wax.

In the machine category, we picked up a Vitalo-Meter and Periodontal Probe, both from the J. Morita Corporation. The former applies an electric current to dental pulp to see whether the nerves are vital, while the latter is used to check gum pockets (if you've ever had this done, you may know the familiar call-and-response of the manual method: "Four." Four." "Three." "Three." "Four." "Four." "Two." "Two." et cetera.). The heaviest of the lot (and the one that made me the dirtiest) is the Pyrometer for Electric Furnace B from the SS White Dental Manufacturing Co. The oven was used to fire porcelain to 2300 degrees.

Lastly, we received two nice dental mallets, one for gold foil (Cleve-Dent, Ferrier) and one for oral surgery (no manufacturer indicated). A small metal bottle from Zeno, the "cleansing agent for teeth and gums"; a box of San-Ei Instrument Co. chart paper; and a memorial plaque that used to hang in the dental school.

Now, off to change my bandages....
Posted by Sara Piasecki at 1:48 PM No comments: 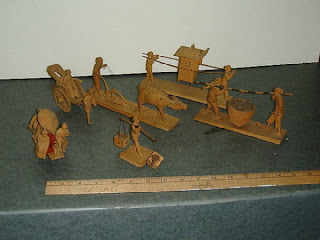 The triennial tour of a triad Chinese librarians from Fujian Province to Oregon stopped at OHSU today; regular readers may remember our recap of the 2007 visit.

We again pulled out the Chinese figurines from the Qing Dynasty (shown here), and the books by Chen Xiuyuan (Qing era, on gynecology) and Gong Tingxian (Ming era, on ophthalmology). And while we didn't purposely pull out anything from the papers of Charles Grossman (such as the Ma Haide Christmas card), we happened to have the 1977 US-China People's Friendship Association folder--hand delivered by Dr. Grossman this morning--sitting out on the counter.

With today's deposit, the preliminary inventory of the Grossman papers runs to 39 pages.

The next Chinese librarian visit, set for 2013, should be an opportunity for us to really showcase the vast collection of Chinese materials from the Grossman papers. Stay tuned!
Posted by Sara Piasecki at 2:12 PM No comments: 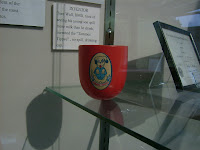 A Friday morning dental appointment gave me the perfect excuse to visit the solarium on the second floor of the OHSU School of Dentistry, where in full light and great warmth a display on "Notable Alumni" features the father-son duo, Thomas P. Wall, D.M.D., and Thomas Wall, Ph.D.

The elder Wall was a 1934 graduate of the North Pacific College who went on to practice in the Seattle area. According to the exhibit text (prepared by J. Henry Clarke, D.M.D.), Wall received a degree from the Ohio State University School of Journalism and "served as editor of the Journal of the Seattle District Dental Society for many years, receiving numerous awards." 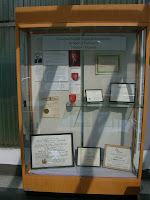 Wall Senior is perhaps better known as a pioneer in the use of clinical hypnosis in dentistry. He was one of the first members of the American Society of Clinical Hypnosis; that group established the "Thomas P. Wall Award for Excellence in Teaching Clinical Hypnosis" in 1991. Wall was also president of the Washington Academy of Hypnosis.

Way cooler, from the perspective of an exhibition curator, is Wall's invention of the Tommee Tippee sippy cup, one of which is on display.

Wall the younger is a clinical psychologist practicing in the Seattle area. The materials in the display were loaned by the Wall family. For those who cannot make it down to SOD in person, I've included some photos here. (Click on any image for larger versions) 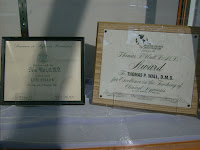 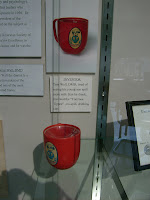 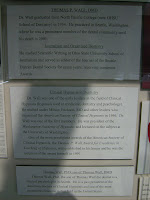 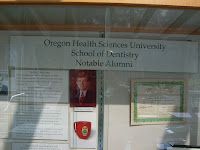 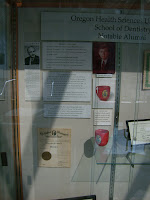 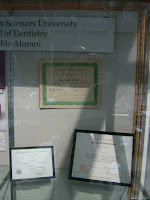 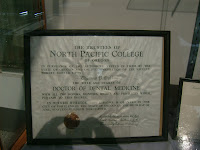 Posted by Sara Piasecki at 1:55 PM No comments: