A 40 year Stint at a Temporary Position
The Long and Good Career of Wren E. Gaines


During my years as archivist in the Historical Collections & Archives, I have come to admire the late Wren E. Gaines, former superintendent of the school's physical plant. There are others that I have come to know through their photographs, records and personal papers, and though they have long passed on, I have developed special feelings for them, as well. Maybe it was Wren's kind face...

The camaraderie he nurtured with the labor force, and with the officials and faculty of the school, is an example to us all. It is evident from the many photographs of him in the Historical Image Collection and within other collections, that he was a good man to have around as a friend and as a professional.

Wren joked in an interview with the newspaper, when he retired at age 65, that if he "had known that the job was permanent, he never would have taken it." He began working as a lab technician in the school's department of physiology in 1914, when the school was still located on NW 23rd Avenue and Lovejoy Street, until he retired in 1954.

Gaines reminisced about his first year at the school (1914):
"…stories still were flying about the "great snowball fight" between medical students of Willamette University and those of the University of Oregon Medical School (1913). At that time, the two medical institutions were located several blocks apart. One cold winter afternoon, Willamette students challenged the Oregon boys to a snowball fight. The battle raged back and forth until the Willamette medics gradually forced the Oregon students up the street to the University of Oregon Medical School. The victorious forces then proceeded to break every window in the building with the well-placed snowballs.

Gaines said that later on, Willamette students took up a collection to pay for the damage. That same year, the medical school department of Willamette University [Medical Department] was merged with the University of Oregon Medical School."

Wren continued to work as a lab technician until the school moved into the new Medical Science Building on the Marquam Hill (now named Mackenzie Hall), completed in 1919. Gaines and some of the medical students cut down the trees and heavy tangle of brush on the construction site on the hill, alongside William (Pop) F. Allen, emeritus professor of anatomy.

He was then appointed superintendent of buildings and grounds and continued in that position until his retirement in 1954.

Posted by Karen Peterson at 3:30 PM 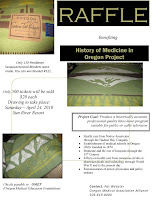 Tickets remain for a small but important raffle to benefit the Oregon Medical Association/Oregon Medical Education Foundation's History of Medicine in Oregon Project. As regular readers may know, OHSU Historical Collections & Archives is a partner in this project, which aims to produce a documentary about the history of medicine in the state from the earliest settlers to the present day. Much of the material has been collected, and now production can begin—once we have the funding to do it!

As an official Oregon 150 project, the project steering committee received #111 of the 150 blankets specially created by Pendleton to celebrate the state sesquicentennial (Click on the attached flyer for a photo of the blanket). Only 500 tickets will be sold. The drawing will be held at the OMA meeting on April 24, but you do not need to be present to win.

Tickets are $20 a piece. Contact Leanna Lind at leannalind[at]aol.com to purchase tickets. Thank you for your support--and good luck!
Posted by Sara Piasecki at 11:16 AM 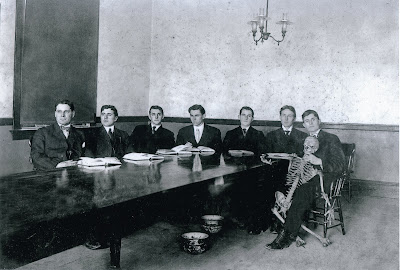 Just in time to turn one hundred, this image of a group of students at the Willamette University Medical Department was sent our way by Robert Windom, son of Arthur L. Windom, pictured here third from left. Arthur graduated in 1910 with only four classmates: James C. Bartlett, George A. Massey, J.T. Murphy, and J. Ray Pemberton. Since there are more than five students in this photo, it may have been a study group of mixed students--or, two of those pictured may not have graduated on time (or ever).

We quite love the spittoons under the table!
Posted by Sara Piasecki at 10:33 AM 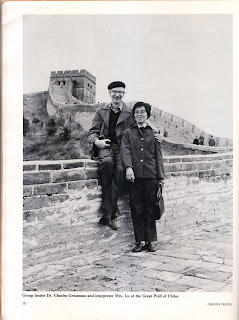 Tuesday's visit from Dr. Charles Grossman netted us three very interesting folders for the archives, plus a copy of the July 1975 issue of Oregon People, with Ralph Friedman's article "An Oregonian in China" (shown here is Friedman's photo of Grossman and Mrs. Lu at the Great Wall).

One folder contains all of Dr. Grossman's collected materials on Frederick L. Schuman, PhD (1904-1981), a political scientist who taught at the University of Chicago and Williams College before coming to Portland State University in 1968. Grossman was both friend and physician to this notable author, and the folder contains correspondence, news clippings, and other ephemera.

The next folder, labeled "Correspondence 1968 Campaign" is filled with letters that Grossman collected during his involvement with Scientists and Doctors for Morse, a group that raised about $10,000 for Oregon Senator Wayne Morse's (unsuccessful) reelection campaign in 1968. The correspondents are not just from Oregon; there are several letters from scientists and physicians across the country. One from Linus Pauling accompanied a donation to the group; Pauling took the opportunity to ask Grossman whether he "might know someone who is treating mentally ill persons by megavitamin therapy, as well as the customary methods, in the Portland area."

And in a nod to the future, we also received a preprint of Grossman's new article, "Growing Up with Geriatrics," the 95-year-old physician's perspective on the development of the specialty, forthcoming in the Journal of the American Geriatrics Society. He asks: "Are we justified in applying the studies of those under 75 to those of us over 80, or 90?.... Many questions remain to be answered." Given time, Grossman might yet answer a few of them.
Posted by Sara Piasecki at 7:11 AM

The House That Became A Hospital 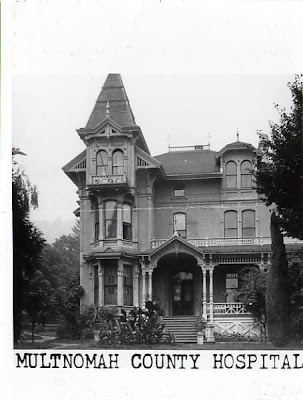 The fallibility of documents is our theme once again this fine spring day. When one spends days and days just taking materials in, sorting them, housing them, lovingly tucking them into their designated niches, one tends to forget that they're really just little heartbreakers. Each and everyone of them. Bound to lure some researcher into learning just a little bit more, never all, probably not enough, about any given detail from the hoary past. Maybe, if they're really tricksy, they'll even lie.

Yes, I said it: lie. I was led astray by one Courtney M. Smith, one of the many students organized by Olof Larsell into the Medical History Club of the University of Oregon Medical School. I could perhaps be forgiven, since Larsell himself was taken in, quoting Smith verbatim in the section of The Doctor in Oregon which treats of the history of the Multnomah County Hospital.

What great misperception was perpetrated in Smith's paper, "The History of the origin and growth of the Multnomah County Hospital, Portland, Oregon" (1933)? On page 7, Smith writes:

“…in March 1909 an announcement was made that the County through its Commissioners had purchased property on Second Street between Hooker and Hood Avenues for the establishment of Multnomah’s first real hospital. This property had been owned by the former Oregon capitalist, Mr. Sim Reed, whose wife later endowed Reed College, and consisted of about one square block of land on which stood an elaborate old mansion.”

There the inaccuracy lay in wait for me, hapless researcher, looking to write up a piece on the history of the hospital. Happily, sharp-eyed reader Ann Kracke, volunteer at the Oregon Historical Society, caught my error when reading The Scribe.

Ann had been working on the OHS file for one Charles E. Smith (no relation to Courtney, I would assume, since that would make the error particularly unforgivable) and had remembered that his home had been given to the county for use as a hospital. The building is so distinctive that Ann was able to tell from the image that the original MCH site at Second and Hooker was the Smith home. On her next visit to OHS, she made some copies of news clippings and old photos for us to show the true owner of the home that became the hospital.

So, that begs the question: how did Courtney get it wrong? Only twelve years after the county hospital moved up to its new digs on Marquam Hill, the young historian must have been misled by one of the references he consulted. The aged memory of a senior physician? Perhaps. One piece of evidence that hints at a possible source of confusion: the Simeon Reed home (which was also quite lovely, as a matter of fact) was at one time the site of the Woman's Hospital and Sanitarium--according to an undated piece from the OHS file on Reed. Miss A.M. Burnham was superintendent.

Our thanks to Ann Kracke for setting us straight. We will, of course, put this packet into our file on MCH, to spare the heartbreak of the next unsuspecting researcher....
Posted by Sara Piasecki at 2:46 PM

On Friday, another trip down to the vault at the OHSU School of Dentistry resulted in the transfer of three boxes of oversize photographs, awards and certificates, and miscellaneous publications, including many commencement photos, a scrapbook, and a number of dental history illustrations. We also swung by the Alumni Office and picked up a box of dental artifacts donated by Steven J. Little, DMD, for the museum collection.

Although the poster for the Freshmen Slaughter (this one from 1909) is probably the most graphic, we already wrote about that event. Instead, we'll share this lovely original sketch of Dental School faculty member Henry Cline Fixott (1879-1959), which may have been drawn by Dean Harold Noyes (although it is unsigned); we find it a bit reminiscent of the caricatures drawn by cartoonist Tige Reynolds. Regular readers might remember Fixott from this post, when we celebrated the accession of a collection of his teaching materials. 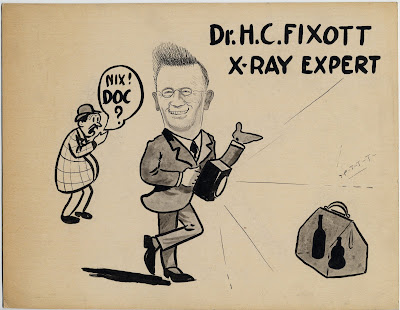