Stories From the Clippings

When Goldie Got Sacked
One of the Most Puzzling Murders in the "Recent" History of Portland
When I started blogging about the news clipping folios, I promised there would be more stories involving the State Crime Lab on the UOMS campus; and I promised that I would warn you when I raise them from their acidic tomb. It's funny that I would have this irresistible urge to recount these stories, since I have never been a fan of mysteries and grisly tales. But for those who find them irresistible, another tale emerges from the crypt.

Fifty-seven year old George F. Sack lived in Chicago, where two of his three wives had died. Each of these women came to an untimely and violent end. George had been tried in the death of his second wife, who unfortunately died of gunshot wounds. Lucky George was committed to an insane asylum but was released and later came to live in Seattle. In 1939, he was questioned in the disappearance of two people from the Seattle area who were never found. Was it suspicion based on his previous scrape with the law or could he have been guilty in this case? The newspaper doesn't say.

A year later, George moved to Portland where he bought The Gordon Court Apartments on Montgomery Street. He tried to stay out of the public eye, that is until Goldie, his third wife, died mysteriously February 16, 1954. Goldie's body was found lying crumpled under some bushes in a sparsely wooded park in Southeast Portland. It was a sad end for a teacher from Great Falls, Montana. An informant called the sheriff's office saying he had spotted a man acting suspiciously, carrying a bundle into the woods at the exact spot where Goldie's body was found. He was so curious, in fact, that he took down the car's license plate number. This was enough to bring Sack in for questioning. Sack claimed that Goldie had simply left the house in the morning and had not returned. Curiously, George was soon released. During the investigation, Goldie's safety deposit box was opened in the presence of the press, deputies and relatives; $10,000 lay there untouched. When George was released after questioning, he quietly withdrew the money that was bequeathed to Goldie's brothers.

Stumped, the Oregon State sheriff hoped that the autopsy report from the State Crime Lab would give them a clue as to the cause of death. Assisting the State Police in solving the mystery were Drs. Warren Hunter (in photo), Terrence Cochran and Homer Harris. Phillip Leveque, UOMS pathologist, prepared liver extracts from Goldie's body to be used for toxicological analysis on white rats. But they were stumped too and found nothing conclusive. Reportedly, nothing untoward was found or, the journalists asked, were the authorities and pathologists keeping certain facts hidden?

It was eventually reported in the newspapers that Sack was convicted of her murder. He had suffocated Goldie, stuffed her in the trunk of his car and stashed her body in the park. (One report stated that she had been drugged and was asphyxiated in the trunk). George was sentenced and scheduled to be executed for the crime.

Almost cheating death, Sack was given a short-lived stay of execution. While being driven to the death house at the state prison, the car was turned around at Woodburn and the police returned Sack to the Multnomah County jail. His attorney had appealed to the Supreme Court for a new trial stating that George believed he had been given an unfair trial due to the publicity surrounding the case and the public revelation that this was not his first wife to die suspiciously. The appeal was denied.

We are left with so many questions: Why did Sack kill his wives and why wasn't he ever incarcerated for the first two murders? Why didn't the crime lab have any answers to how Goldie died? Was Sack ever returned to the death house? From the articles, we know only that George was convicted but not that he was executed. I suppose the unanswered questions are what make true crime stories so captivating. Hopefully, George F. Sack did not live to kill again. 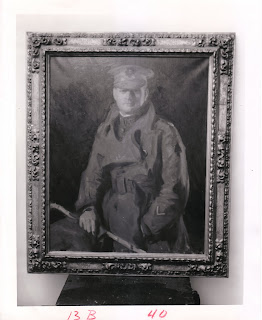 Boy, it seems like we've expanded into the realm of the art museum nearly overnight! I remember the day, long ago, when I received my first donation of art here at the archives: a lovely original editorial cartoon of the tram. (Apparently that was in December of 2006; good thing I started this blog to keep track of my first impressions.)

Back to today's events. The OHSU History of Medicine Society has graciously agreed to fund a small project to provide wall labels for the twenty portraits that hang in the Old Library rooms. While some of the portrait frames do bear the subject's name and (sometimes) dates, others lack any indication of who the person was and why they rate a big painting in one of the hottest party spots on campus. We'll be writing small blurbs to satisfy the curious; if easily obtainable from the items themselves, artists' names and dates of execution will also be added.

One of the portraits is thought to bear some (possibly) erroneous information. Shown here in an old black-and-white photo (no digital camera with me today) is the painting labeled on the frame as Ray Matson. How could that be controversial, you ask? Because Ray had a twin brother, Ralph. Both Ray and Ralph served with distinction in World War I as part of the U.S. Army. Ralph, however, had gone over to England and served with the British Expeditionary Force in France prior to the start of American involvement in the war. It has been suggested that the uniform shown here might represent the BEF and therefore the man depicted might be Ralph. While I'm waiting for my uniform histories to arrive via interlibrary loan, I don't suppose any of you kind readers can shed any light?

For those who have not yet visited the Old Library (or who have never taken full stock of the portrait gallery), the other notables shown are: 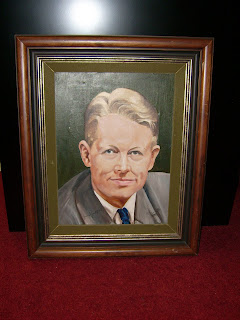 Robert Jarvis Gould (1915-1972) was administrator of the Multnomah County Hospital and associate medical director of the University of Oregon Medical School Hospitals & Clinics at the time of his death in February of 1972. He was a 1941 graduate of UOMS, completed his internship and residency here, and had joined the school faculty in 1948. In July 1972, the school dedicated a garden in his memory, in the southeast corner of the Multnomah County Hospital grounds. Of Gould, former Dean Charles Holman said, "Under Dr. Gould's leadership Multnomah Hospital developed into one of the finest municipal hospitals in the country. Its patient care services were considered models by municipal hospital administrators throughout the United States." The Gould portrait is signed "D. Merritt, 1958." 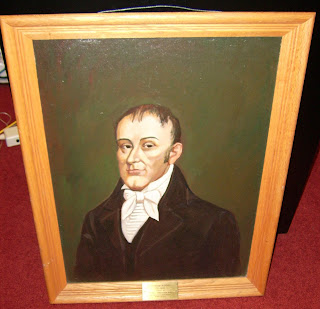 Kentuckian Ephraim McDowell is credited with having performed the first ovariotomy in 1809. The McDowell portrait bears a brass label that identifies the subject and notes that the painting was donated by John C. Brougher, MD, on May 18, 1969. Information on the back indicates that Edward M. Rowe painted McDowell from a color slide in 1960. Alumnus John Brougher donated a large number of items to the collections here at OHSU (98 items are represented in the OHSU Digital Resources Library alone!); it's gratifying to be able to bring this piece together with the rest of those materials.
Posted by Sara Piasecki at 1:18 PM 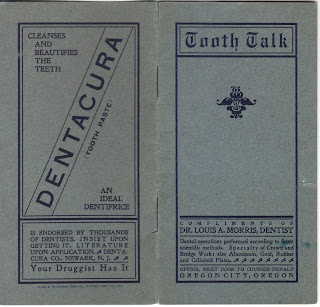 Yesterday's mail brought us a delightful little donation of a promotional booklet published by Oregon City dentist Louis A. Morris, D.M.D. Titled Tooth Talk, the small (6 x 3.5 inches) eleven-page pamphlet is both a marketing tool for Morris' dental practice and a short instructional text for consumers. This is a type of ephemera that rarely gets saved and deposited into archival collections, so we are especially grateful to have this example.

By turns stern, persuasive, and conversational, the piece is a quite page-turner. Here are some excerpts:

Patronize the dentist who sterilizes his instruments after every operation and you may be sure that there is no danger of infection from dirty instruments. The patient should appreciate the importance of this.

Stop and think it out for yourself. Has there ever been a time when you neglected a decayed tooth--kept putting it off until tomorrow--and when you were finally forced to seek a dentist's aid were told you had neglected the tooth too long and and it would have to be extracted? And do you remember the resolve you made to yourself that it would never happen again? And yet the chances are that you are letting another one go along the same road. Just think it over.

Remember that a perfect set of teeth has made many a lady attractive, and broken down, discolored, or decayed teeth have made an otherwise attractive lady unsightly.

A trip last Thursday to The Vault at the School of Dentistry revealed a number of fascinating historical artifacts, including this photograph of the North Pacific Dental College football team circa 1900. 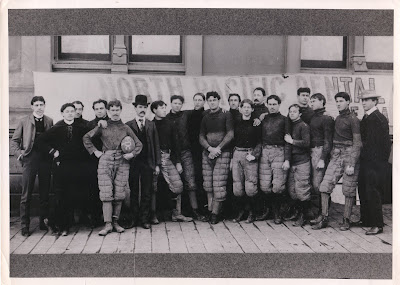 It's a nice match for the photo of the 1894 Medical School football team. If only we had one of the nurses' team....
Posted by Sara Piasecki at 1:48 PM