Sometimes all we can ever know about a person is what we read in obituaries. Many leave little or no trace of their activities while alive except in a newspaper and in the hearts and minds of those who knew and loved them. Time passes and so does memory fade and so it is that we love obituaries.

The Youngs, the Reames, the Waffles and all of Astoria Mourn Her Passing

Clara Wilhelmina Waffle died of a stroke in Astoria, Oregon at the age of 79. Her sister and daughters were at her bedside when she passed. According to the Astoria news, she was one of Astoria’s best known citizens. Among her accomplishments was her graduation from the University of Oregon Medical School in 1907. She graduated with only 3 other women out of a total of 36 graduates and was one of the first women doctors to practice in the State. Women were among the earliest graduates from Oregon's medical schools but not all women graduates went into practice. Clara was also one of Astoria’s first city health officers.

Born in San Francisco in 1874, she moved to Astoria with her parents, Ben and Christina, when she was only 1 year old. Her father was one of Astoria's pioneer salmon cannery operators. Clara was well brought up; she attended Miss Warren’s School for Young Ladies and later studied music abroad, spending two years in Sweden and two years in Leipzig, Germany.

When Clara returned from Europe, she married Dr. Frank Reames. Shortly thereafter, they moved to Klamath Falls, where poor Frank died just 16 months after they arrived. It was at that time that she decided to study medicine.

After graduating from UOMS, she returned to Astoria where she married Dr. Eldred B. Waffle in 1910. She and Eldred traveled throughout Europe doing post-graduate studies in Paris, Berlin and Vienna. When they returned to Astoria, they opened a joint practice. Having only been married 18 years, Eldred died leaving Clara to continue their practice until she retired in 1938.

She was active in community affairs and in addition to being the city health officer, she was an instructor in St. Mary’s Hospital Nursing School. She continued her interest in music, giving lectures throughout the State.

Clara left her two daughters, Josephine and Frances, four grandchildren, her brother Stanley and two sisters Caroline and Wilma and all of Astoria to mourn the passing of one of Oregon’s earliest women doctors.

If you are interested in women graduates, check out the Lucy I. Davis Phillips Collection on Oregon Women Medical School Graduates.
Posted by Karen Peterson at 3:00 PM No comments:

Yesterday morning, we received the three-volume work, Surgical treatment: a practical treatise on the therapy of surgical diseases for the use of practitioners and students written by James Peter Warbasse from 1918-1919. The books were a donation from Slate Wilson, MD, adjunct professor of surgery at OHSU.

OHSU already holds Warbasse’s The doctor and the public, published in 1935. Surgical treatment was really the culmination of Warbasse's thought on the practice of medicine and the technic of surgery in his day. In the preface, he writes: “Surgery is an art based upon a complex of sciences. It is always in a developmental stage. Accordingly the author has endeavored to inspire the reader with the spirit of originality, to teach him not only how to do, but to suggest to him new lines of action, to set him thinking on the problem of treatment from his own standpoint.”

The work includes 2400 illustrations, and has sections on:


Warbasse was an 1889 graduate of Columbia College of Physicians and Surgeons and served with the Seventh Army Corps in the Spanish-American War; he was also chief of surgery at German Hospital in New York from 1906. He was a controversial figure in his day, primarily for his political and social views; he was actually expelled from his local medical society in 1918 for his opposition to compulsory military training. A short biographical sketch of Warbasse was published in 1996 in the American Journal of Public Health.

The donated copy of Surgical treatment was previously owned by Salem practitioners Carl L. Holm (a 1945 graduate of University of Oregon Medical School) and William Boyd Mott (a 1916 graduate of a California medical school). Once cataloged, the volumes will reside in the Trunkey Rare Book Collection.
Posted by Sara Piasecki at 1:51 PM No comments:

The Oregon Encyclopedia is continuing its statewide tour, starting conversations in towns around Oregon about local history and the development of the online state history resource. Tillamook County is next on the list, and the meeting date is fast approaching. From the press release:

A public community meeting will be held in Tillamook on Wednesday, March 31, from 12:00 p.m. to 3:00 p.m. at the Tillamook County Library located at 1716 Third Street. The meeting is free and open to the public. Refreshments will be served.

Participants will be asked to contribute their knowledge of local history and culture to The Oregon Encyclopedia (The OE), an online resource of the state’s significant people, places, events, and institutions available to anyone with access to the World Wide Web at http://www.oregonencyclopedia.org.

What about the medical history of Tillamook County? Olof Larsell covers the period from 1788 to 1907 in slightly more than one page in The Doctor in Oregon (p. 294-295), noting that the "first physician to remain among the settlers in the Tillamook region was Dr. Gideon Davidson (1819-?) who came there in 1866 with his wife and five children." Davidson was followed by someone named McKinley in 1878 and by W.H. May in 1895. Horace Patchen came the following year. Others apparently made (long) rounds into the area from practices in bigger towns to the East until William Calvin Hawk settled in Bay City in 1907. Hawk built the Tillamook Bay Hospital and also operated a drug store.

Do you know about other notable medical figures in the county's history? If so, the OE folks would love to hear from you--and so would we!
Posted by Sara Piasecki at 1:26 PM No comments: 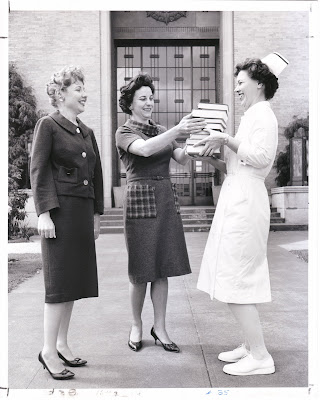 In honor of the upcoming centennial of the OHSU School of Nursing, we offer this image celebrating the library services available to the school.

A note on the back indicates that this photograph was taken in June of 1962, with alumnae Charlotte Scrogin (class of 1951), Joanna DeMeyer (class of 1953), and Jean Bates (class of 1959, M.S. 1971). In the 1962 school catalog, we see that DeMeyer was assistant professor of medical-surgical nursing and Bates was an instructor in operating room nursing. That same catalog notes that:

The library for the School of Nursing is a part of the Library of the University of Oregon Medical School. The library collection includes 80,000 volumes of books and bound periodicals and a large number of unbound periodicals. Approximately 1,432 current periodicals are received. Through the privileges of interlibrary loan and microfilm service, it is possible to procure, within a few days, material not in this collection.

The teachers were good. The library excellent; and there was an expectation that you would go on [to graduate education].

Annals of the Thoracic Clinic

The good folks in the Special Collections of the Oregon State University sent up to us last week a copy of John E. Tuhy's Annals of the Thoracic Clinic. Published in 1978, this history of the Thoracic Clinic of Portland is a crucial document in the history of chest diseases in Oregon, covering the period from the Matson brothers (Ray and Ralph) at the turn of the century to the retirement of the author in 1977.

Broken into two sections ("The Pioneers" and "A New Era in Cardiopulmonary Medicine"), the Annals blends a careful analysis of developments in therapy and research with biographical insight into the men and women who participated in those advancements. We get the whole history of the Portland Open Air Sanatorium (later called the Matson Memorial Hospital for Diseases of the Chest), which operated from 1904 through the 1950s before shuttering its doors. The Thoracic Clinic then moved its operations to Providence Hospital, relocating from one building to another and then another, with the pace of research and the expansion of clinical care accelerating at seemingly breakneck speed through the late 1970s.

Tuhy's story is also ridiculously entertaining. Who but an insider could tell us that "Dr. Ralph was addicted to a radio program of the day, 'Vic and Sade,' and would usually delay surgery until the program was over!" Or that, in this era before the dangers of x-rays were well understood, a surgeon "could only tell the identical Matson twins apart by the distribution of the radiation scars on their hands." And from a later era, the aside that in 1978, "It can probably safely be said that he [Carl Lawyer, MD] is the only physician in Portland remotely connected with cardiopulmonary disease who has a computer at home!"

In his forward, Tuhy writes that "One of our group suggested dividing this chronicle into ancient, medieval, and modern eras, and in fact, the contrasts are almost striking enough to deserve these terms." Certainly, 75 years is an enormously long stretch of time in the history of modern medicine, and many of the treatments of yesteryear seem quaint, if not barbaric, to today's reader. "But," Tuhy himself notes, "who can say if our successors will not look on our own time as one of groping in the dark with faulty premises and inadequate tools?" Who, indeed.
Posted by Sara Piasecki at 2:48 PM No comments: