Looking for a little lunchtime diversion? Join us for today's OHSU History of Medicine Society Lecture:

"Pericles and the Plague of Athens"

Medical history is Dr. Mackowiak's other passion and area of growing expertise. For almost a decade, he has hosted an internationally acclaimed series of Historical Clinicopathological Conferences in Baltimore. These have given rise to ten peer-reviewed articles and two books, one entitled Post Mortem: Solving History's Great Medical Mysteries (2007) and the other, Imperial Furies: Impact of the Julio-Claudians and Their Illnesses on Roman History, which is currently in search of a publisher.

The lecture is free and open to the public.
Posted by Sara Piasecki at 7:00 AM

"The sentiment of the State in regard to advancement generally"

This morning, a researcher asked us whether we had any information on Alice Hall Chapman, MD, who practiced for a time in Woodland, WA, before an "injury" necessitated her retirement from medicine. We only know Alice's name through her connection with C.J. Hoffman, MD, whose scrapbook, glass lantern slides, and medical equipment were deposited in our collections.

We had no Biographical File on her, but a check of the state medical board register indicates that she was licensed to practice in Oregon in 1893. It also indicates that she received her medical degree from Woman's Medical College of Pennsylvania in 1886. In the 1898 directory, "Chapman, Alice H." is listed as having a practice in Eugene, OR (where her husband was president of the University of Oregon), but there is no mention of her in Larsell's The Doctor in Oregon. An internet search revealed a short biographical sketch of Alice and her husband in Judy Card's history of Woodland, "Fields of Flowers and Forests of Firs," published on the Lewis River history site.

And then, we stumbled upon this interesting report from Chapman to the Alumnae Association of the Woman's Medical College, published in their Transactions in 1900 (p. 120-121). A summary of the situation of women physicians in Oregon, it reads in part:

"So far as I can learn, only one woman physician has ever been appointed to a public office .... None of the local societies has ever admitted women. Application has been made to the Portland society several times, but in each instance the applicant has been kindly advised to withdraw her name before its presentation to the society, and has always followed the advice, on the assurance that she could not possibly be elected....

Until recently women physicians have not had a good name, particularly in Portland. Some of the earlier practitioners did a notoriously irregular and criminal practice and gave a bad reputation to the profession for women. It has been lived down in large part, however, by the later comers who have maintained a high standard of life and practice. Their persistent effort has had its effect...

So, with active practices and the need to network just as men did in the local medical organizations, women physicians that year established their own group, the Medical Club of Portland, open to all "regular" women physicians.

By 1906, however, Alice was across the river in Washington (as evidenced by this article by R.C. Coffey, in which he describes the treatments Alice prescribed for a patient with intestinal intussusception). She provided medical services to that small town until C.J. Hoffman took over her practice sometime before 1920. For more about Hoffman, see our guide to the Carl Julius Hoffman Scrapbook Collection, 2008-002.
Posted by Sara Piasecki at 1:05 PM

So many interesting medical history events and activities upcoming, it's hard to keep up! Here's a roundup of some that have recently come to our attention:

Two exciting local lectures are fast approaching:
April 8: Sherwin Nuland, MD, author of The Soul of Medicine and How We Die will discuss "The Artist Observes the Doctor: Half a Millennium of Scrutiny." The presentation will take place in Corvallis, OR, at Oregon State University in the LaSells Stewart Center (adjacent to Reser Football Stadium). It will begin at 7:00 PM. Public is most welcome.

April 13: Rebecca Skloot, author of The Immortal Life of Henrietta Lacks (the story behind HeLa cells used for decades in biomedical research) will present a discussion of her book at 4:00 PM in the OHSU School of Nursing Auditorium. A book signing will follow the presentation. Public is welcome.

The Flexner Report is turning 100! To celebrate its birthday, the Jewish Hospital and University of Louisville School of Medicine are sponsoring an all-day conference, May 4, 2010, on "the biographical details of Flexner’s life and the importance of the Flexner Report as an enduring historical document, its impact on medical education and its contemporary relevance." You can get more information on the conference and register online at the centennial web site.

The Canadian Public Health Association is celebrating their centennial in style, with a web site and a forthcoming history titled "Constant Vigilance: The Story of Public Health in Canada." The web site includes a "Milestone of the Day" and browsable lists of milestones back to 1867. A "Profiles in Public Health" section includes photographs and biographical sketches of notable figures.

The National Library of Medicine (U.S.) has launched its Directory of History of Medicine Collections database online. Available as a printed directory for a number of years, the directory's database version "is keyword searchable, with the ability to refine your search results by categories: organization type, state/province, country, collection subject strengths, and organization name." You'll see us listed here, along with our friends down the Hill at the National College of Natural Medicine.

The 2012 Oregon Woman Suffrage Centennial is in the planning stage and is now getting a boost from the Oregon Historical Quarterly, which "plans to use the upcoming 2012 centennial of the achievement of woman suffrage in Oregon as a catalyst for promoting new scholarship on the subject of women and citizenship in the state." The journal has put out a call for proposals for both manuscripts for publication and panel speakers for the November 2010 conference "Game Changers and History Makers: Women in Pacific Northwest History." More information on the conference can be found online here. Note that the deadline is March 29. Contact OHQ editor Eliza Canty-Jones for details at eliza.canty-jones[at]ohs.org.

(And with the roundup theme, I could put in a plug for the new show at the Oregon Historical Society on the Pendleton Roundup--but that might be going too far...)
Posted by Sara Piasecki at 11:33 AM

This morning's visit from Dr. Charles Grossman brought us a nearly complete set of presentation technologies from the 1940s to the present: glass lantern slides (talk on C14 glycine), 35 mm slides (cancer and hypothyroidism), 3 x 5 floppy ("Multiple cancers"--not sure yet what software), and DVD with PowerPoint (Hanford). We're on the watch for Dr. Grossman's latest publication to hit the electronic presses of the Journal of the American Geriatrics Society so that we can add PDF to the mix. We are lucky enough to have the equipment to view all of these lectures--and print them out onto paper when necessary.

His visit also brought us a charming booklet of housestaff photographs from New Haven Hospital, 1944, including this shot of the young Dr. Grossman "doing something with a burette." 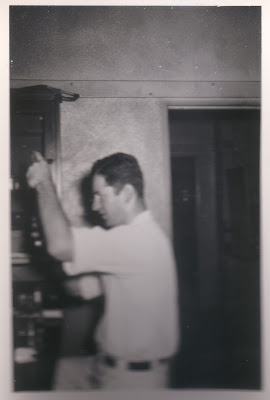 The booklet has photos of the following staff: 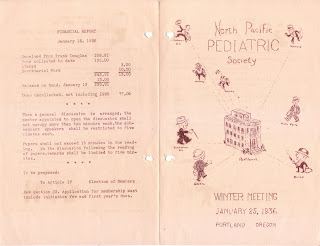 At what point does an object, an image, a concept, go from "same old, same old" to "quaint antique"? How many years does it take to make a classic? How long do archives need to hold on to stuff before anyone's going to want to use it?

This morning, a researcher plunged into the records of the North Pacific Pediatric Society (2009-002), becoming the first interested party to request the unprocessed collection of materials chronicling the history of the Society from 1919 to the present (literally; we received the meeting program from 2009 in a recent accrual to the records).

There were oohs and comments from the research table and requests for scans through the first couple of boxes, but then the excitement died away. By the 1970s, the group was talking about "the usual stuff," and so the motivation to continue leafing through the 30- and 40-year old records slowly evaporated. In those earlier meeting minutes and programs, the titles of presentations seemed quaint and amusing, the names of the presenters imbued with a faint air of dignity, if not legend. The more recent programs were unremarkable in content, the speakers more well-known and familiar.

So, is that how far back one needs to go? Fifty years? Is the "quaint line" a constant, like 25 years for classic cars? Or is it more contextual, based on the nature of the field being surveyed? In medicine, where knowledge (or at least information) is expanding at an ever greater rate, perhaps the line is at 50 years for an established specialty like pediatrics but at ten or twenty years for genetics and maybe even five years for robotic surgery? This field specificity is certainly one component of historicality (if you'll allow me to use that word), but as a reference archivist, it's not the one I most commonly see. Most researchers--amateur historians, genealogists, students, curious onlookers--perceive things as "old" largely as a function of their own age. Or their time in the field. Or the reach of daily memory in their unit/department/cohort. Even practiced historians have to work, to some extent, to overcome this natural bias.

This is not a revolutionary insight by any means, but it's one that we ignore at our peril. All of us: historians, writers, donors, senior faculty, junior faculty, but especially archivists (and all other workers in cultural heritage resources). Just because it's new to me doesn't mean it's new to a given researcher. Just because it isn't new to a given researcher doesn't mean it won't provide a younger researcher with a great insight. If one person's memory has assimilated, refined, and generalized a concept introduced twenty years ago to such an extent that the concept is perceived as "the same thing we're talking about today," that doesn't mean it is the same thing.

Which is all a rather roundabout way of saying that faculty input on archival collecting can only get you so far. That the importance and value of archival repositories collecting contemporary material cannot be assessed with modern metrics of usage. That just because you think there's nothing of value in your papers, doesn't mean fresh eyes won't find excitement and inspiration there.

(PS: Frankly, this 1999 NPPS presentation sure sounded quaint and amusing to me: "Finding Quality Resources on the Web"--but, that's just my age showing....)
Posted by Sara Piasecki at 12:51 PM