This being the day of my fortieth anniversary, it seems appropriate to celebrate those OHSU units and programs celebrating along with me this year:

The School of Nursing's master's program received accreditation from the National League for Nursing. You can read all about the history of SON in Barbara Gaines's work, now available in full from the school's website (PDF).

The Dept. of Anesthesiology in the School of Medicine was established as an independent unit, with Norman Bergman as chair. Check out the interview with Dr. Bergman's widow, Betty, or The History of Anesthesia in Oregon to learn more about the department.

The Division of Family Practice was created, with Laurel Case as chief. An oral history interview with Dr. Case was conducted as part of the OMA/OMEF history of medicine in Oregon documentary project, and a transcript is available from Historical Collections & Archives upon request.

The Division of Pediatric Surgery was begun, with Jack Campbell as chief. Dr. Campbell sat down with us for an oral history interview in 2005; tapes and transcript are available in the main library. Also of interest is Harold Erickson's Recollections on the first residency in pediatric surgery at Doernbecher Memorial Children's Hospital, Portland, Oregon and A history of pediatrics in the North Pacific : commemorating the centennial meeting of the North Pacific Pediatric Society, 1919-1970.

The Division of Physical Medicine and Rehabilitation started, with Kenneth Smyth as chief. Arthur C. Jones was Professor Emeritus in the division that year; his 1991 memoir is a vast tome that contains a great deal of information about his family, but also about the development of physical medicine in Oregon.

And the section of renology within the Division of Cardiology began under George Porter. The oral history program got to Dr. Porter early on; his 1998 interview is available in the main library.

Happy Birthday to us all!
Posted by Sara Piasecki at 10:32 AM 2 comments:

"Here is my office. I bequeath it to you" 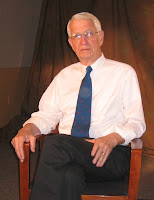 Dr. Meyer, being something of an overachiever, typed up some answers to the roster of potential questions in advance--which will come in very handy for future researchers since it didn't all get covered on tape. He also brought along a history of the department that he had written up circa 1991--another great addition to the collections.

Interviewer Dr. Lesley Hallick led Meyer through his early years, his education at Berkeley, further work at Purdue and Johns Hopkins, and on to Oregon where he has spent the last 52 years. The full transcript will be forthcoming, but in the meantime, I'll share a few of my favorite tidbits:

On meeting Barbara, his wife of 60 years, Meyer described the scene in the lab when she came over and said "Can I borrow your burette?" Hallick declaring "What a line!", Meyer noted that Barbara was forward, right from the beginning.

Asked how researchers protected themselves from the botulinum toxin in the laboratory of Carl Lamanna at Hopkins, Meyer replied: "They were told to be very careful." And then proceeded to recount the story of a fellow graduate student who accidentally splashed himself with toxin.

And on coming to Oregon, where his uncle Harry Sears, Ph.D., had just retired as chair of the Dept. of Bacteriology: Proudly showing off his office to his nephew, Sears magnanimously said "Here is my office. I bequeath it to you." If only OHSU space assignments were still so easy to come by...
Posted by Sara Piasecki at 9:44 AM No comments:

Today, the History of Medicine Room will be closed from 10:00-4:00 as we go for take two on the oral history interview with E. Alan Meyer, PhD (postponed from December).

And this seems like a good time for another quick programming note: Historical Collections & Archives will also be closed on Monday, February 15, for Presidents Day.
Posted by Sara Piasecki at 7:39 AM No comments:

Another tidbit for the Nursing Centennial

As we mentioned earlier, the OHSU School of Nursing is this year gearing up to celebrate its 100th anniversary. This morning, I happened across photocopies of three small pamphlets from the early history of the Multnomah Training School, which were included in the Subject File on Multnomah County Hospital. (According to the 1988 transfer memo with the copies, the originals went to the School of Nursing.)

The first, "Constitution and Standing Rules of the Multnomah Training School, adopted November, 1928" begins with a nod to the U.S. Constitution:

We, the nurses of the Multnomah Training School, have united in student government to form a more perfect training school, to maintain order, to establish justice and to create a feeling of fellowship that may influence us in our wide field of service to others.

It goes on to lay out the 23 rules instituted to maintain that order, including dictates on sleeping patterns:

7. A student nurse is on her honor to sleep six hours on the day that late permission is given.

(So, you can stay out late; you'll just pay for it tomorrow.) And it ends with the Nightingale Pledge.

The "Constitution and By-Laws of the Multnomah Hospital Alumnae Association" from 1933 lays out two objectives for the group, to wit:

To maintain the ethical standard of the training school; to promote closer professional and social relations among the graduates, and the keep them in touch with the school.

To cooperate with the District, State, and National Nursing organizations for the promotion of the professional and educational advancement of nursing.

The third pamphlet describes the "Portland Doctors Exchange and Nurses Registry." The undated piece, written by Genevieve E. Kidd, R.N., sets out the object, eligibility, rules, and a "standard schedule of rates and hours in hospitals." The intention was to make "a Central Directory for nurses, to maintain the interests of the Nursing Profession and to aid the Medical Profession and the public in securing efficient care for the sick."

These pamphlets illustrate that only a few years after establishing the school, the nursing graduates were well on their way to organizing themselves into a professional community.
Posted by Sara Piasecki at 9:13 AM No comments:

In our ongoing effort to "inform researchers in a timely manner" of new receipts (per the ACRL/SAA Joint Statement on Access to Research Materials in Archives and Special Collections Libraries), we hereby announce that, this morning, we picked up two boxes of records from the office of Robert D. Koler, M.D., Emeritus Professor of medical genetics and former Associate Vice-President of Academic Affairs at OHSU.

Included in the haul (which was literal, since the room I brought them to is not handicapped- or bookcart-accessible) are many of Koler's teaching slides (35mm); chronological files from 1988-89; Principles of Clinical Medicine curricular materials from 2000 and 2002; faculty handbooks and academic procedures manual; affirmative action committee records from 1993; School of Medicine Alumni Council materials from 2001; and a folder labeled "Dillehunt Building Committee" (which will help bring the earlier Story from the Clippings full circle).

Koler received his medical degree at the University of Oregon Medical School in 1955 and went on to intern here and complete a residency in hematology. He succeeded E.E. Osgood as chair of the Division of Hematology and Experimental Medicine in 1964, and founded the Division (now department) of Medical Genetics in 1967. In 1988, he was named Associate Vice-President of Academic Affairs.

An oral history interview conducted with Dr. Koler in 1997 is available in the main library.
Posted by Sara Piasecki at 10:26 AM 1 comment: