[Stories From the Clippings is on hiatus until further notice.] 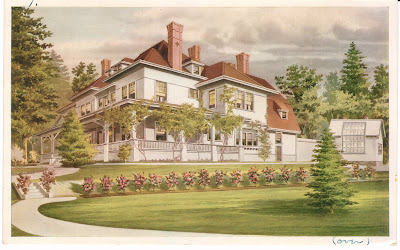 From Robins, we learn that the hospital underwent about as many name changes as OHSU, beginning with North Pacific Sanitarium, continuing with Portland Surgical, Coffey Clinic and Hospital, and Coffey Memorial Hospital, and ending with Physicians and Surgeons Hospital. It first opened in 1900 at 20th and Glisan streets, in a building formerly used by Henry Coe for treatment of mental diseases, and was where Coffey conducted surgeries, particularly surgical gynecology. In 1901, it became the North Pacific Sanitarium, which closed in 1910.

In 1915, Coffey relocated his hospital to the former site of the Portland General Hospital at 19th and Lovejoy streets, and expanded it in 1926. When Coffey died in 1933, his son took over administration and made the facility into a general hospital, adding "memorial" to the name.

In 1945, the facility was purchased by a group of doctors who created the non-profit Physicians and Surgeons Hospital. It remained open until 1985 when it merged with Holladay Park Hospital.
Posted by Sara Piasecki at 1:17 PM No comments:

As yesterday's discussion reminded us, the concept of "public health" has been evolving over time, as successful measures are implemented widely and new standards of living are normalized. The public health officer of old had a different set of priorities to address. Consider this note from the 1911 Biennial report of the State Board of Health:

MOVING PICTURE SHOWS
Aside from any criticism of the moral tone or the cheap and tawdry sentimentality of the average moving picture show, which latter existent condition must act to blunt the intelligence and ideals of young persons who so largely compose their audiences, attention is directed to the entire lack of ventilation which is provided in the majority of them. Masses of humanity are packed into enclosures where they breathe the same air over and over again and these resorts have become the disseminating points for all infectious diseases. No moving picture or other show should be allowed to operate until the greatest care has been exercised in providing for ample ventilation of the enclosure in which it is held.
Posted by Sara Piasecki at 3:26 PM No comments:

While searching through the bound issues of volume 14 of the Medical Sentinel, published monthly in 1906, for a particular item, one notices a recurring thread. Well, several recurring threads, really, including rancorous medical partisanship and the uncovering of quackery. But the thread under discussion here is typhoid fever.

The March issue has an editorial note on "Typhoid Fever Conditions at Eugene" (as well as the bluntly titled "The Willamette a Sewer"); the July issue carries an in-depth article on "The Character of the Recent Typhoid Epidemic at Eugene" by W.L. Cheshire; the August issue contains a note on "The Typhoid Fever Question"; the September issue reports an outbreak of typhoid fever in North Yakima, WA, and has a note on the "impure water" of the Columbia and Willamette river systems; the October issue reports on "Typhoid Fever in Oregon"; the November issue warns of "Typhoid Fever at Klamath Falls"; and the December issue culminates in not one but two feature articles on typhoid fever epidemics. The October report indicates that there had been 61 deaths and 600 cases of the disease in Oregon in the period January 1 to September 1.

The first of the December features, by Marius B. Marcellus, MD, is entitled "Typhoid Fever, with Especial Reference to Diagnosis and Treatment." The paper was first given at a meeting of the Portland City and County Medical Society on October 17 of that year, and aims to give readers the benefit of Marcellus' wisdom, gleaned during his "rare privilege of serving as Interne in St. Timothy's Hospital, Roxborough, Pa., during an epidemic of typhoid fever" (and we can only agree that it must have been a rare privilege, indeed).

After an introduction on the particular circumstances of the Roxborough outbreak, Marcellus declares that "It is not the intention to dwell long on upon the pathology nor the symptomatology of the disease, for one could enumerate symptoms and pathological changes indefinitely which are not of especial interest to the busy practitioner who is anxious to make a positive diagnosis and institute the proper treatment" ("You say you have fever, white-coated tongue, headache, nausea? Let's let the blood test be the judge of that")

Marcellus goes on to recommend use of the Widal reaction in all cases (though admittedly only present in 95.5 to 97 percent of all cases), averring that "The Diazo reaction first described by Ehrlich in 1882, the writer believes to be practically useless."

The article continues in this tone to its end, which comes with a list of "books consulted", "journals and articles", and "references." It contrasts sharply (no doubt intentionally) with the next paper, "Some notes on the Chicago Epidemic of Typhoid Fever of 1902" by Noble Wiley Jones, M.D., who had just arrived on the Portland medical scene fresh from European training. Jones' approach is both more quantitative and more speculative than Marcellus; we get detailed numbers on types of patients, autopsy findings, symptoms, complications, and outcomes, while he muses on the causes behind unusual findings and outlines case reports on a few individual patients.

After analyzing 980 cases, Jones states: "Our work, therefore, to sum up briefly, led us to rely upon the following factors, which as shown by Kuehn and others, are given in their order of importance: The leucopaenia, the early enlarged spleen, the Diazo-reaction, the roseala, and, lastly, the general clinical picture" (this would be that pesky list of symptoms). At "Diazo-reaction" we get a footnote that Marcellus' refutation of the efficacy of the test in the preceding article is "of great importance. To my knowledge it is the first time that pathologic significance has been denied this reaction."

Coming from a man who had just finished a course in advanced pathology training at the Allgemeines Krankenhaus in Vienna, I do believe this amounts to a smack-down.

For a modern reader, the details of treatments provide a great deal of the entertainment value of Jones' piece. We hear about the colonic flushings with saline water administered every other morning, the dosings with brandy and whiskey, rectal temperatures "taken frequently", and the nearly continuous baths. With 980 patients, the creative staff of Cook County Hospital "converted a large rubber sheet with the corners tied to the bed posts into a tub." Positively spa!

Today, typhoid fever is nearly absent from the U.S., and occurs primarily in travelers.
Posted by Sara Piasecki at 2:45 PM 4 comments: 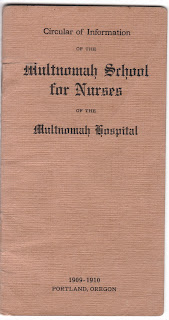 This year, the OHSU School of Nursing will celebrate its centennial, marking its opening in 1910 as the Multnomah Training School (also called the Multnomah School for Nurses--and so the name games begin...)

You can expect to hear much more about the anniversary as the year progresses, but we thought we'd kick things off with a look at the "Circular of information" promulgated to publicize the new school. Printed by the Portland press of the Chausse-Prudhomme Co., the 6 x 3.5 inch pamphlet is chock full of interesting information and requirements that seem positively outrageous to modern readers.

The text begins with the location of the school and the general announcement. Here we learn that "The schedule covers two and a half years of training." Keep this in mind.

Following is a list of members of the Board and the staff. The nursing superintendent was Alta B. Youmans-Spalding (or Spaulding, depending on which page you're reading), and the medical staff included such familiars as Noble Wiley Jones, Ralph Fenton, and Ralph Matson. There was an oral surgeon on staff (D.B. Stuart, DDS), and a house physician and intern had been assigned to duty. Lectures in eleven topics were to be given over the course of the program.

And then we get to the Rules for Admission. These run to three and a half pages, and include the following stipulations (among others):

*[Applicant] must be in good health and between twenty and thirty years of age
*The Superintendent reserves the privilege of dropping a pupil at any period of her training for misconduct, inefficiency, or neglect of duty
*Probationers must bring two dresses of gingham or calico, six large white aprons, one pair of comfortably fitting shoes with rubber heels, two bags for soiled clothes, one pair of scissors and a watch.
*No food is provided to nurses out of the appointed time, except when ordered by the Matron, at the request of the Superintendent. Nurses are not to go into the kitchen nor give orders to the cook.
*Twenty pieces [of laundry], well marked, are allowed each person per week.
*Nurses are not permitted to receive calls in the wards of the Hospital from their friends or other nurses.
*No one will take any letters from the mail-box excepting those addressed to her.

"Janie, can you grab my mail? Why, no, Sal, I can't--I might be kicked out!" And this was for how long? Two and a half years. That, my friends, is dedication to one's craft.

As Oregon medicine has its Olof Larsell, so Oregon nursing has Barbara Gaines, whose A history of the school, 1910-1996 is the definitive guide to the subject. We may be a little biased, so see for yourself: the entire history is available online as a PDF from the School of Nursing web site.
Posted by Sara Piasecki at 1:46 PM 2 comments:

A question about an early female member of the Oregon State Medical Society (now called the Oregon Medical Association) led us down to the 19th century issues of the group's Transactions, which OHSU thankfully holds.

The proceedings of the second annual meeting have been identified as "vol. 2" by the library cataloger, but in fact there seems to have been no volume 1. A short section titled "Preliminary organization of the Oregon State Medical Society" precedes the title page to the transactions of the second meeting, and states that "Owing to the unavoidable incompleteness of the transactions [of the first meeting] your Committee on Publication have nothing further of interest to publish in this pamphlet."

So, beginning at the beginning, then, we see that the member roll--helpfully included in each volume--lists 38 regular and 2 honorary members, none women (as far as we can tell. And none called L.A. Smith, either.)

But, in just a few short years, women make the cut. "Miss Ford, A.L." and "Miss Ford, E.J." are listed in 1877, fresh from their graduation from the Willamette University Medical Department. Is it just a coincidence that the first women admitted to the state medical society were the first women to be educated in the state's medical school, by Oregon physicians who were themselves immersed in the local medical community? Other early female physicians, many educated at homeopathic schools (because few regular schools would take them), may have been viewed with more suspicion by the establishment.

So, it seems that the Ford sisters were the first of the local medical "organization women", beating out Mae Cardwell, first female member of the Multnomah County Medical Society, by about 15 years.
Posted by Sara Piasecki at 2:54 PM No comments: