[Karen is unexpectedly out of the office, and so there will be no new installment in Stories from the Clippings today. Please check back next week.]

Sharing one of my absolute favorite campus shots, from the east corner of the old Multnomah County Hospital building (now Multnomah Pavilion), looking south and west across the parking area to Doernbecher Memorial Hospital for Children (now called Dillehunt Hall) and the Medical Science Building (now called Mackenzie Hall). The graceful lines and the beautiful tone of this photograph made it a winning choice for our second series of historic postcards. Enjoy! 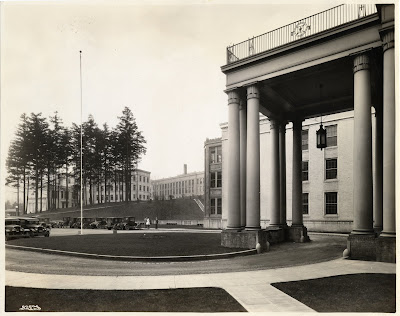 [Click for larger version]
Posted by Sara Piasecki at 3:10 PM No comments:

Looking through the Biographical File for Noble Wiley Jones, M.D., we came across several misfiled items, including copies of two letters by John C. Brougher, M.D., and one letter from E.G. Chuinard, M.D., to Librarian Bertha Hallam conveying the Brougher correspondence and a request to contact Brougher directly.

In the letters, Brougher outlines a proposal to place some sort of commemorative marker on the campus of Willamette University that would celebrate the history of the school's Medical Department. Inspired by a trip to campus made on the occasion of his 45th class reunion, Brougher wrote a letter in June of 1968 to solicit funds for the memorial. Typed on the letterhead of the Vancouver Clinic (of which he was a founding member), we suppose that it was sent out to the state's physicians en masse--most of whom were in some way connected with Willamette or the University of Oregon Medical School, with which WUMD merged in 1913. (Brougher was himself a 1928 graduate of UOMS.)

He writes: "I do hope that we can be successful in getting a proper attractive marker on Willamette's campus, perhaps near the Music Building [formerly the medical department] with correct and appropriate information on the historical significance of our alma mater in the development of medical teaching in the Oregon country."

A second letter, handwritten to E.G. "Frenchy" Chuinard in late September of 1968, shows Brougher's disappointment and frustration in the meager response he received to his proposal. He asks Chuinard whether "the Ore. State Med. Society with its interest in history might take on such a project?" Chuinard sent this request in turn to Bertha Hallam who, with her fingers on the pulse of the medical community and her own strong interest in medical history, was perhaps well placed to assist Brougher.

The building, now known as Art Building, still stands on campus, but we aren't aware of any plaque or other physical memorial to the medical department (any Willamette folk out there able to let us know?). In lieu, perhaps, Brougher might accept the Wikipedia article...
Posted by Sara Piasecki at 12:13 PM No comments:

More on the fires that burned Barbette

A few months ago, we shared some photos of the 1687 Barbette donated by alumnus Jack Flanagan, M.D., and a bit of its life story. Barely a working copy by booksellers' standards, it is beautiful to us for its long chain of provenance and its Oregon connection.

Charred and broken, the book had been through two fires in Coos Bay (formerly called Marshfield), according to the lore passed down to Flanagan when he was given it in the 1960s. Now, Flanagan's daughter has kindly sent us more information on the specifics of those conflagrations, courtesy of the Coos Historical and Maritime Museum.

The Marshfield Fire of 1919 broke out around 2:30 a.m. on February 18, 1919. By the time the fire department was able to get the flames under control, a half block of the city was destroyed. While Flanagan can no longer remember exactly which building Dr. Tower's office was in, it was above one of the damaged businesses--Grimes Building, Lloyd Hotel, Title Guarantee and Abstract Co., Pioneer Hardware, Jerry's Pool Hall, Blye Restaurant, and Stauff Grocery.

The city burned a second time, in the Marshfield Fire of 1922, which started on July 23, 1922, in J. Guildesheim's "junk store." Again, the offices of Dr. Tower were damaged, located as they were in one of the burned buildings: Bennett & Walter Building, Nasburg & Hirst store, O'Connell Building, Bennett Building, Deubner Building, Johnson Building, Thorn Building, Flanagan Estate Building, Flanagan & Bennett Bank, City Hall, and Odd Fellows Hall (do you get the sense that Bennett and Flanagan were the big businessmen in town?) A photograph taken after the 1922 fire is available as part of the historical timeline on the CHMM web site.

Two fires in four years caused the townsfolk to rethink their urban master plan; the downtown area was subsequently relocated to the west and new buildings were constructed of fire-resistant materials. Dr. Tower resettled in yet another of the downtown buildings; while we can only speculate as to what else from his office was damaged, it's possible that a metal examination table, steel instruments--as well as his trusty doctor's bag, which he likely had with him at all times--remained to form the basis of a new office. And the Barbette was still completely readable, should Tower have needed a refresher on treating the plague ("First, get out of the city...")
Posted by Sara Piasecki at 2:40 PM No comments: 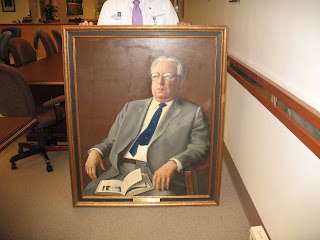 Some months ago, we received a query about the artist who painted the lovely portrait of Dean David W.E. Baird, MD, which hangs above the fireplace in one of the rooms of the Old Library Building, F. Dennis Ramsay. Ramsay, who just died in February 2009, completed the painting in 1968. Portraitist of such notables as Britain's Prince Philip and Iraq's King Faisal, Ramsay certainly had an international reputation as an artist--but why did the school select him to paint Baird?

The commission had been awarded to Ramsay, it seems, because of an earlier portrait he had done of Harold J. Noyes, then Dean of the University of Oregon Dental School. The community was so impressed by that painting that his name was forwarded--and perhaps only his name--to the committee working on Baird's portrait.

On Friday, I had the distinct pleasure of finally seeing the Ramsay Noyes portrait, along with portraits of Dean Herbert Miller (painting) and Dean Louis Terkla (photographic). Current Dean Jack Clinton was kind enough to pull them out of their storage closet for a quick photo shoot. Needless to say, the photo doesn't do any kind of justice to the Noyes portrait, which is indeed as captivating as rumor had suggested. It's wonderful to have two fine examples of Ramsay's work here on campus. 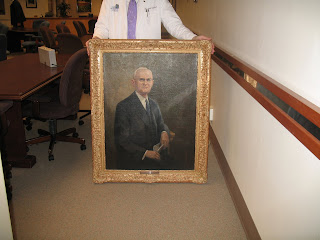 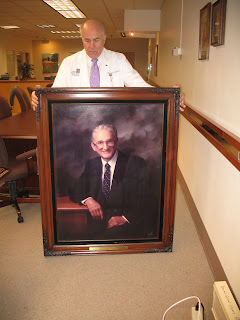