Historical Collections & Archives will be closed Monday, January 18, in observance of Martin Luther King Jr. Day. See you on Tuesday!
Posted by Sara Piasecki at 7:35 AM No comments:

More Stories from the Clippings

What if the mountain had claimed him…

Charles T. Dotter was the chairman of the OHSU School of Medicine Department of Diagnostic Radiology for 33 years until his death in 1985. In the late spring of 1953, just after coming to OHSU, the young doctor and a fellow radiologist, Louis H. Frische, prepared to climb the still snowy peak of Mt. St. Helens. They began their ascent in the dark, cold, pre-dawn hours. Dotter, an experienced mountaineer, knew the risk they were taking, but taking chances was nothing new to Dotter. It seems that he was well known as a bit of a dare-devil.

When a storm engulfed the mountain, Dotter decided that he would continue his ascent in the "teeth of the storm", but Frische decided to stay at a spot just short of the summit to wait. When Dotter and Frische didn't return home, their wives began to worry and called the Mt. St. Helens Rescue Committee. All phone lines were down, so the Washington State Patrol was called in with portable radio units. An 11-man search party was assembled and set off to find the two climbers.

Frische had waited for Dotter for the agreed upon two hours in the driving snow before he walked down the mountain. He was found by the WSP just below the Mt. St. Helens Lodge. In the snow and fog, he had missed the cabin by a proverbial inch.

Blinded by the snowstorm, Dotter unwittingly descended the opposite side of the mountain; it was reported that he was found holed up in a ski club cabin above Timber Lake. After a 25 mile trek around the mountain at 5,000 feet, Dotter's tale is that he walked in on the ski patrol in the ski club cabin. "One of the party on the radio said, 'Frische's found. Now I wonder where Dotter is.' 'Here he is', I told the startled rescuers as I walked into the cabin. They were mighty glad to see me."

Exhausted but unharmed, Dotter and Frische walked safely off the mountain. His students presented him with three compasses, two maps of Washington, a classroom full of friendly and insulting signs and two cowbells. He carried one of the compasses around in his pocket to help explain just what had happened.

How lucky it was for his many patients and for the future of diagnostic and interventional radiology that he lived.

Considered the father of interventional radiology, Dotter introduced transluminal angioplasty at OHSU in 1964, using catheters to increase the diameter of blocked arteries and improve blood flow in patients with arteriosclerosis. During his career, he continued to develop innovative techniques that expanded the field. He was honored with numerous awards and honorary memberships. He received gold medals from the American College of Radiology, the Radiological Society of North America, the Chicago Medical Society and the Chicago Radiological Society. In 1978, he was nominated for the Nobel Prize in Medicine. In 1990, in honor of Dr. Dotter, the Oregon Health & Science University established the Dotter Interventional Institute.

We received twenty-seven more boxes from the School of Nursing on Tuesday, with paper records and media (reel-to-reel, Umatic, and VHS films, 3.5 x 5 floppies, and 35 mm slides) all pertaining to academics, both undergraduate and graduate, including curriculum materials, meeting minutes, student projects, and faculty presentations.

One item in particular quickly caught our eye: a Colenbrander Ophthalmoscopy Mannequin from the Hansen Ophthalmic Development Laboratory in Iowa City. Purchased in 1977, it came with a styrofoam head model, lenses, twenty 35mm slides of eye conditions, and instructions for use. Named after its developer, August Colenbrander, MD, the model allows students to study various conditions of the fundus by interchanging slides.

It's a bit spooky to look at, especially when you realize that the eyes come out... 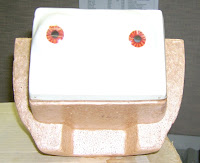 Posted by Sara Piasecki at 9:16 AM No comments: 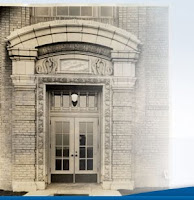 Today marks the debut of yet another, newer, hopefully easier-to-use version of the Historical Collections & Archives web site.

This new layout better reflects the organization of HC&A collections and the activities and programs under our umbrella. That said, we live here, so the rooms look cozy and familiar to us. If you have trouble locating any desired information or are just generally confused about where to find things, please let us know!

Now that the site is up, you can look forward to more frequent content updates, including revised inventories, new archival guides, and lecture links.
Posted by Sara Piasecki at 1:25 PM 1 comment:

Neurosurgery in the First World War 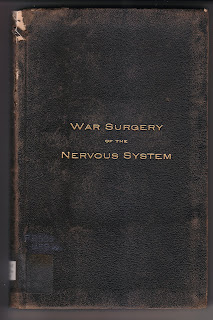 Our intermittent poaching from the circulating collections of the main library has brought another tender volume to a happy home in the History of Medicine Room: War surgery of the nervous system; a digest of the important medical journals and books published during the European war, compiled by the Division of Brain Surgery, Section of Surgery of the Head, Office of the Surgeon General (Washington, GPO, 1917).

The "digest" portions of the book are each prefaced by a synopsis of the current literature, in an effort to put the "foreign war literature" into context. The abstracts cover articles published in English, German, and French medical journals from August 1914 to August 1917, "and those foreign treatises dealing with war surgery as practiced and observed during the present conflict." The context is provided by the "chapters from Keen's Surgery written by Dr. Harvey Cushing, and chapters from Dr. Isaac H. Jones's forthcoming book on Equilibrium and Vertigo", as well as selections from "C.A. Elsberg's book on Diseases of the Spinal Cord and its Membranes, and Dr. Charles H. Frazier's volume (in press) on Surgery of the Spine," and Gordon Holmes's chapter on peripheral nerves from Osler's Modern medicine.

More than a mere historical accounting of the actions of military surgeons during the conflict, the volume was meant to shed light on developments in neurosurgery that could be, and now were being, applied in operating rooms everywhere. The preface states:

The use of the phrase "war surgery" must be taken with a good deal of qualification, lest one fall into the error of thinking of this type of work as separate and distinct from the surgery of civil life. As a matter of fact the surgical principles governing both are in large part exactly the same. The laws of ballistics, trench life, the terrain of the battle field, the problems of transport, and numerous other incidentals serve to modify established principles of surgery, but not more than that. [emphasis added]

Indeed, the modifications made to address some of war's "incidentals" have been adopted by for use in peacetime with great success, belying the old adage that you can't make a silk purse out of a sow's ear (Arthur D. Little, Inc. notwithstanding).

Table of contents:
Preface -- ch. 1. Head. pt. 1. Fractures of the skull ; pt. 2. Meninges, ependyma, and brain ; pt. 3. The vestibular apparatus in the diagnosis of intracranial diseases ; pt. 4. Abstracts from foreign war literature -- ch. 2. Spine. pt. 1. Surgical anatomy of vertebral column and spinal cord ; pt. 2. Normal and pathological physiology of the spinal cord ; pt. 3. Localization of motor, sensory, and reflex functions in the different segments of the spinal cord ; pt. 4. The symptomatology of spinal disease ; pt. 5. The symptoms of spinal disease at different levels and in different regions of the cord ; pt. 6. The operation of laminectomy ; pt. 7. Abstracts from foreign war literature -- ch. 3. Peripheral nerves. pt. 1. Diseases of the peripheral nerves ; pt. 2. Abstracts from foreign war literature.
Posted by Sara Piasecki at 8:26 AM 2 comments:

While I'm a big fan of dentists, I'm not such a big fan of going to the dentist. I try to follow those suggestions to breathe deeply, concentrate on the soothing music in the room (even if it's 1970s disco), go to a "happy place."

Today, I spent two hours in dental chairs in the OHSU School of Dentistry Faculty Dental Practice and I found myself completely distracted with thoughts of how much worse it would have been in the old dental school on Sixth and Oregon streets downtown. I was positively comforted by the buzz and whine of modern dental instruments, thinking back to the oral history interview conducted with Class of 1949 alumnus F. James Marshall, D.M.D., in 1998. Marshall, whose father had also been a graduate of the North Pacific College in 1923, talked about the physical plant of the old school building:

WEIMER: Well, let’s go back. We can talk about some of the faculty that you remember, but let’s hold that for a moment and go back. I’m interested, first of all, in your dad. I didn’t realize before I met you today that he was also a graduate. Did he ever talk to you about his dental school days as compared to what you were going through in the ’40s?

MARSHALL: Well, there was little change in the physical plant of the School between my father’s time and my time. My father learned dentistry in his time with a foot engine; I learned it with a 4000-rpm sewing machine motor. That was the major change. If the patient wanted suction, they had to pump a little bulb in their lap into a spittoon. If we wanted to wash the tooth cavity, we had to use a water syringe. If we wanted to get rid of the tooth dust, we had to use a chip blower. Water suction and compressed air came later.

Student practice income came from the student treatment of patients. We went to school six days a week. In my senior year we were six to seven hours in the clinic Monday to Friday, and Saturday morning 9:00 till 1:00. In the junior year we shared a chair and an operating unit in the main clinic, with another junior. In the senior year we had our own chair. And a chair it was: wooden back, wooden seat, with a spittoon attached. As I said, no running water, no suction.

I kept thinking of that foot treadle, imagining a corps of dentists with one huge thigh, silently praising those unheralded dental engineers who brought speed, convenience, and hygienic tools to the modern operatory. And before I knew it, I was back in the hallway.

So, chalk up one more benefit of knowing history: it can be positively relaxing in certain situations.
Posted by Sara Piasecki at 3:15 PM 1 comment: