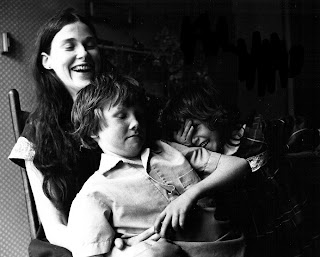 Laurel Lee: Miracle Mom
Once I had a very good friend. We had known one another for many years... let's see, I was just 18 when I met her. She left this world at the age of 58 and I was 54.
At 31, while pregnant with her third child, she contracted Hodgkins disease, an often fatal cancer of the lymph glands. The University of Oregon Health Sciences Center (one of the iterative names of OHSU) could and would treat her but she would need to make the most difficult decision of her life, to abort the child she was carrying or to take an enormous risk: keep the child and treat the cancer. No one could tell her exactly what the consequences might be.

Laurel decided to go ahead with the treatment while carrying the baby. The radiologist, Kenneth Stevens, and staff threw a thick sheild over her abdomaen while they attacked the cancer. While going through her ordeal, Laurel kept a journal in an old ledger book illustrating it with her own drawings.

Laurel showed her book to one of the physicians. He showed it to another who passed it on to a literary agent in New York. Long story short, "Walking Through the Fire" was published. Her baby, Mary Elizabeth not only survived, she thrived.


Laurel went on to write and publish many more books and to travel the world sharing her story. Her trials were not over by a long shot but she lived to raise her children and found great happiness among the tribulations.


Twenty seven years later, she contracted pancreatic cancer and died in the loving embrace of her husband, Mike Thayer, her children Matthew, Anna and Mary Elizabeth and her many, many friends.


Thank you to the kind Ken Stevens, M.D. F.A.C.R. and the staff of the Department of Radiation Medicine at OHSU for giving us so many more years with Laurel Lee, Miracle Mom.

Posted by Karen Peterson at 2:17 PM

That's a beautiful story and a reminder about the best side of medicine and our doctors! Thanks for letting me know about Laurel and her family.