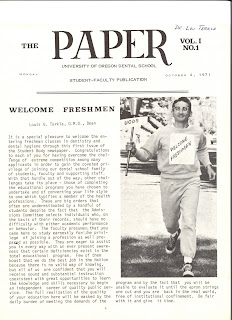 If you were going to start an informational bulletin, a bulletin you planned to fill with newsy bits and announcements, anecdotes, an image or two, and some advertisements, what would you call it? How about The Paper? That was the name chosen by the faculty and students of the University of Oregon Dental School when they embarked on such an endeavor in October 1971.

In October of 1976, after The Paper ceased publication, the choice was The U.O.D.S. News. That title had to be short-lived, since it was dated before it hit the press (the school had become part of the University of Oregon Health Sciences Center in 1974).

By January of 1984, the school's creative minds had hit their stride: issue number one of The Incisal Edge was pithy, fun, and printed on blue paper.

We only know this printing history because Dr. Henry Clarke and other historically-minded folks at the dental school kept issues of each of these newsletters safe in the vault. The library now has a run of The Paper from v.1 no.1-no.9; v.1 no.1 of U.O.D.S. News (and I would seriously doubt that more issues were ever produced); and v.1 no.1 and no.4 of the Incisal Edge. If anyone can help us fill in the gaps in this run, we'd love to hear from you.

What do we learn from these bulletins? Besides the obvious (reflections on the organization, administration, and culture of the dental school in the 1970s and 1980s, along with factual information about programs, faculty achievements, and student activities), we get great articles like Fred Cowan's "Grass in Dentistry" (yes, that sort of grass), the informal survey results of "Patient Attitudes about Student Dress Codes," and a report on students doing outreach to the Oregon State Penitentiary called "Remembering the Forgotten Men"--plus, we get to see photos like the one shown here, of Dean Terkla doing his best Olympic marathoner imitation.
Posted by Sara Piasecki at 1:06 PM