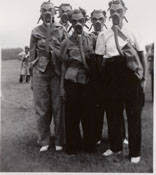 Oh alright already, we'll join the bandwagon! A handful of digitized photos from the Historical Collections & Archives has now been loaded to Flickr, as part of the OHSU Library's photostream. (If you're only interested in seeing the historical materials, you can go directly to the HC&A subset.)

These ten images were selected from the subset of digitized images mounted in the OHSU Digital Resources Library, which is itself a subset of our growing collection of digitized photos, which is (you guessed it) a very small subset of all our image collections.

What do you think? Do you use Flickr regularly, and if so, do you look for historical images there? Do you like the ability to comment? Would you like to see us do more of the Flickr thing, or do you think we have it covered with the other publishing outlets we already use? (Web site, blog, Digital Resources Library). If you have an opinion, feel free to comment here or email us directly.
Posted by Sara Piasecki at 7:24 AM No comments:

Portland's recent scare with an E. coli-tainted public water system called to our minds the stories of yesteryear, when untreated water was taken directly from natural sources and unfiltered water--and, really, debris of all kinds--was routinely discharged into said water sources. We've previously shared Esther Pohl Lovejoy's words on the difference the supply of Bull Run water made to the public health of the city when it was brought online in 1895. An example of the hazards of unclean water had been vividly demonstrated just six years before by a young Dr. Kenneth A.J. Mackenzie.

The minutes of a meeting of the Multnomah County Medical Society on June 21, 1889, record Mackenzie's presentation of one of the earliest epidemiological studies in the city:

Dr. Mackenzie presented for discussion the recent epidemic of Typhoid Fever. The abruptness of the outbreak caused him to investigate its source.

There being no efficient Board of Health to refer such cases for investigation, the Doctor upon his own inquiry concluded from the peculiarity of the attack in certain families that the food supply might be the cause of the epidemic. His attention was given to the milk supply, and to his surprise he found that in nearly every instance where the disease existed the supply of milk was derived from one source, that being a dairy near the city, where the gentleman owning said dairy together with his wife, had only a short time previous suffered from typhoid fever.

It was also ascertained that dejecta of these two patients was thrown without any attempt at disinfection into an adjacent creek, the creek running through a pasture frequented by the cows of this dairy.

The Doctor's conclusions were that the cows had imbibed the fever germs and given them off through the milk, or the source of the water supply used by the dairy man for cleansing the milk cans had become poisoned by germs of the disease, thus contaminating the milk distributed by him.....

[The Doctor] hoped that the Society would take this as an initiative to institute proceedings, to arouse the authorities, to take steps to improve the sanitary condition of the city.

Accordingly, the city opened Bull Run in 1895 and the state finally passed legislation establishing local county boards of health in 1903.

Interesting, and true to Portland medical politics, Mackenzie's presentation and call to action were not without controversy. Fellow Society member C.C. Strong, MD, accused Mackenzie of withholding information and endangering the health of the city's citizens; Mackenzie was also charged with following the trail of contamination so that he could be the first to offer his services to the infected. Mackenzie countered that he acted on the basis of legal advice, and that he was unwilling to take the matter on alone. As a result, a committee of members was appointed to make recommendations to city officials on the removal of the source of contamination.

Ah, how far we've come. Portland Mayor Sam Adams plans to ask the citizenry for their thoughts on how the city should handle any future water contamination scares. Twitter, anyone?
Posted by Sara Piasecki at 11:58 AM 1 comment:

And so it goes

Weekly visitor and donor Dr. Charles M. Grossman, MD, arrived this week with a 5-inch bundle of papers under his arm. "I was going to throw all this stuff away, and then I thought I'd just bring it here," he announced. Well, we're glad he decided to bring it in.

Included in the pile are his correspondence files from 1980-81, 1983, and 1987. Raised in an era when carbon copies were produced whenever one typed a letter, Dr. Grossman had migrated to new technology in the 1980s: he was photocopying his personal correspondence and adding it to his files. Many of the letters are to and from Chinese citizens, or pertain to Grossman's activities with the US-China People's Friendship Association and the Evans F. Carlson Friends of the People's Republic of China. Among the cards and notes is a Christmas greeting from Ma Haide to Grossman and his wife, Frosty: 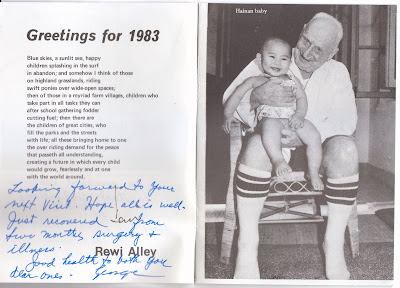 Several of the letters are in Chinese and will require translation into English before we can be sure of their contents.

There is also a folder of materials relating to Grossman's 1967 trip to Berlin to present a paper; articles sent to Physicians for Social Responsibility by a like-minded scientist; and original research on cancers among Hanford Downwinders which Grossman compiled in 2002-03 for a paper with Rudi Nussbaum, PhD (published in Arch Environ Health 2003 May;58(5):267-74).

But the most entertaining file is surely the 2-inch thick white folder containing materials pertaining to Grossman v. City of Portland, the suit arising out of Grossman's 1990 arrest for holding a sign in Waterfront Park during the Rose Festival (he and a small group of others from PSR were protesting the presence of a Navy ship equipped with nuclear weapons). Included is a copy of the final opinion of the US Court of Appeals for the Ninth Circuit, written by Judge Stephen Reinhardt in 1994.

Reinhardt shows himself to be a well-read man with a sense of humor; in footnote 5, he writes: "Section 010 also has been amended since the time of the Grossman affair. It now prohibits persons from participating in "any organized event" in the park without a permit. See PCC 20.08.010. So it goes. See Vonnegut, Slaughterhouse Five passim (1966)."

Judge Reinhardt found for Grossman that the ordinance was unconstitutional at the time of the arrest. He noted: "While our tradition of the parks as a forum for public debate may have always rested in part on economic concerns, this factor is increasingly significant now, when the extremely rich have an enormous variety of privately-owned media through which to reach the public, and political careers can be launched by the mere fact that the putative candidate has a fortune to spend on advertising. At present, more democratic means of communication -- demonstrations in parks, bumper stickers, signs in the windows of homes -- must be jealously protected."

And so it goes.
Posted by Sara Piasecki at 7:52 AM No comments:

We've previously alluded to the Great Fire that destroyed the old University of Oregon Medical School building at 23rd and Lovejoy Streets downtown in 1919, just as the new Marquam Hill building was being readied for occupation and possessions were being moved from one location to the other.

We have an oral account of the fire from 1933 graduate Eugene Gettelman, MD, (interview available in the library), some written accounts of the damage (like the Oregonian bit in which we learn that students threw the hated, pink-striped lab coats into the fire when faculty weren't looking), and now we have visual evidence of the aftermath.

This image, labeled "After the Fire," is from the Richard B. Dillehunt Photograph Album, Accession No. 2004-001 (guide, inventory, and photo index online in PDF), which was pulled for a recent patron request. So far, it's the only extant photo we know of that shows the devastation. (click on the photo for a larger version) 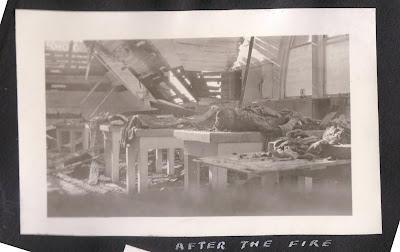 Posted by Sara Piasecki at 2:19 PM No comments: 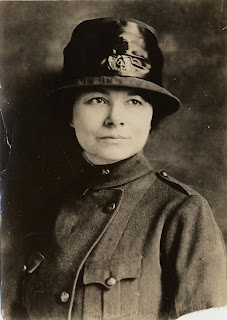 A reminder that tonight, in the History Pub series presented by Holy Names Heritage Center, Oregon Historical Society, and McMenamins, Dr. Kimberly Jensen will be speaking on "Women and the First World War" at 7:00 pm. More details from our earlier post. Admission is free, but donations of canned food for the Oregon Food Bank are strongly encouraged.

Jensen is the author of Mobilizing Minerva: American Women in the First World War and the winner of the Joel Palmer Prize from the Oregon Historical Quarterly for her fall 2007 article "'Neither Head Nor Tail to the Campaign': Esther Pohl Lovejoy and the Oregon Woman Suffrage Victory of 1912." She is currently working on a biography of University of Oregon Medical School Class of 1894 alumna Esther Pohl Lovejoy, about which we are fantastically excited!
Posted by Sara Piasecki at 1:46 PM No comments: