Zane Grey and detective work: two more oral histories in the can

A definite thread ran through our two seemingly disparate interviews yesterday, one with dental materials researcher David Mahler, PhD, and one with occupational medicine physician William Morton, MD, DrPH. Both men were attracted to their respective fields by the prospect of being able to tackle an entire problem, rather than a single, small element of a question. Both received doctorates from the University of Michigan, and both wound up referencing genre fiction. Spooky!

Mahler, our morning interview, clearly articulated his attraction to his field by recalling his decision to switch from aerospace engineering to dental materials while at the University of Michigan. If he stayed in aerospace engineering, maybe he'd wind up working for Boeing and spend his entire career on an aileron; but in dental materials, "I could take an entire problem and apply my skills to the entire problem."

After graduating, Mahler was interested in joining a university where he could really contribute something. But when Kenneth Cantwell, DMD, invited him out to Oregon, Mahler found he was less attracted by the prospect of starting a department from the ground up and much more interested in Oregon fishing. As a boy, Mahler had repeatedly checked Zane Grey's Rogue River Feud out from his local library--his handwritten name filling line after line of the card at the back.

Once in Oregon, Mahler made quite a mark on the School of Dentistry, conducting one of the very first clinical research projects in dentistry (on creep in 8th graders); receiving nearly $23 million dollars in grant support from NIDR (in 2009 dollars), including a grant to purchase the state's second electron probe microanalyzer; and becoming a national authority on dental amalgam.

Morton, the afternoon interview, likened his problem-solving not to Westerns but to detective novels: gathering evidence, tracking down clues, and then putting all the data together to shed light on the mystery. After describing his early years, Morton recalled his decision to go into medicine: "I saw that doctors were in control of everything and knew everything," and so he enrolled at the University of Puget Sound in pre-med (his father being a Methodist minister, his tuition was waived).

As an "extern" at The Doctors Hospital in Seattle, Morton became familiar with "some of the less edifying aspects of medical practice", but his time there laid the groundwork for his later interest in environmental medicine. Coming to Oregon in 1967, Morton became the first member of the Dept. of Public Health who was primarily research-oriented. In the 1980s, when the AFL-CIO approached medical schools around the country to establish occupational health diagnostic clinics, Morton was placed in charge of the newly established Occupational Medicine Clinic at OHSU. As a result of the early cases they saw in the clinic, the group became the first in Oregon to diagnose chronic toxic encephalopathy.

Morton recalled that his tenure at OHSU "was very contentious, but it was fun." He likened himself to "a thistle blowing down the road"--you get caught on a lot more things when you have your spines out. But he "didn't pick a fight over everything I came across--there wasn't time."

We thank Drs. Mahler and Morton for agreeing to sit down with us and share their recollections and anecdotes. As always, interviews will be available in the OHSU Library after processing.
Posted by Sara Piasecki at 1:37 PM No comments:

Oral histories on the docket: Mahler and Morton

We'll be spending all day today capturing two more interviews for the OHSU Oral History Program. Here's a preview of our current candidates:

David B. Mahler, Ph.D.
Dr. Mahler was born in Yonkers, NY, in 1923. He attended the University of Michigan and received a BS and MS in Aeronautical Engineering. He then changed his focus and received a PhD in Dental Materials & Engineering Mechanics, also from Michigan.

His research has focused on dental amalgam, with both laboratory and clinical research projects that led to the improvement of clinical amalgam restorations still in use today.

Over the years, he has been presented with several awards including the Souder Award (the “highest honor in the field of dental materials research” in 1967), the Hollenback Memorial Prize (“for research that has contributed substantially to the advancement of restorative dentistry” in 1988), and the Fauchard Academy, Japanese Section Award for excellence in biomaterials Research (1987).

On top of all that, Dr. Mahler is also a dedicated fly fisherman.

William Morton, M.D., Dr.P.H.
Dr. Morton was born in Boston in 1929 and came West to attend the University of Puget Sound. He received his BS in 1952 and went on to pursue his medical degree at the University of Washington Medical School. He interned at The Doctors Hospital in Seattle and completed a residency in medicine at San Mateo Community Hospital (1958-1959).

Morton then turned his attention to public health, receiving his MPH from University of Michigan in 1960 and his PhD in 1962. He was on faculty at the University of Colorado Medical School for five years before coming to Oregon in 1967 as associate professor in the Dept. of Public Health and Preventive Medicine.

In 1974, Morton was named chief of the Environmental Health division at UOHSC. His high-profile research projects included a study of cancer risk in housewives in Eugene, OR, and the potential hazards of non-ionizing radiation, primarily from television and radio transmission towers. He has been a strong advocate for worker protection from occupational hazards, and is rarely afraid to speak his mind on matters of social justice.
Posted by Sara Piasecki at 7:07 AM No comments:

Since time out of mind, traffic and parking on Marquam Hill have been seen as problems in need of resolution. But before there was a campus to drive to, traffic was not only anticipated, it was promised.

In a letter from KAJ Mackenzie to RS Lovett of the Oregon-Washington Railway and Navigation Co. on Feb. 17, 1914, Mackenzie wrote: "I spoke to you of the effects this gift might have upon traffic, it goes without saying that if this department continues to receive the support of all the states mentioned for the medical education of their youth, the interstate traffic would be augmented in an ever increasing ration, and for the same reason the hospitals upon the campus would attract many people in need of hospital service from the large territory which I have indicated."

Of course, Mackenzie was trying to convince the railroad that their donation of the twenty-five acre campus was a good move, both in terms of PR and economics. And I'd wager that traffic did increase some for the railroad, in those days when "Go By Rail" was more than a quaint family vacation plan.
Posted by Sara Piasecki at 7:59 AM No comments:

New front on the war on entropy

About a year ago, manifest destiny brought the room formerly known as the BICC mailroom into the Historical Collections & Archives orbit. At that time, the Indus scanner was relocated from its first home in OHSU Photography & Graphic Design's space to the BICC. Since then, leftover money from a well-managed and under-budget library project has been used to fund the purchase and installation of new compact shelving for part of the new space. The system has been completed, and now (between raindrops), we've started relocating some records to the new shelves. We gain an additional 300 linear feet with this new space, and just in time: the most recent shipment from the School of Nursing was too large for the remaining space in OL440. 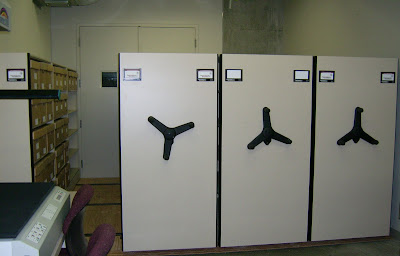 Beer and History. And Beer

Developed by Holy Names Heritage Center, History Pub is a collaborative program of the Heritage Center, Oregon Historical Society, and McMenamins. Each program features a presentation by a humanities expert from fields including history, journalism, law, and women's studies.

The First World War was a watershed in women's history. Tens of thousands of women served in the military and with voluntary organizations at home and abroad. Others opposed the conflict and worked to end it. The war also came as women in many Western states had achieved the vote (Oregon in 1912) and as the campaign for a federal suffrage amendment was in its final stage. Because of this many women saw the conflict as an opportunity to expand their participation as full citizens. This presentation will provide an overview of the significant activities and work of women in the conflict. It will also highlight the story of women physicians, including their campaign for officer status and equality in the military medical corps, the formation of all-female medical units to provide medical care and address violence against women in the war zone, and the work of Oregon physician Esther Pohl Lovejoy in France and with the medical relief organization the American Women's Hospitals.

[Football fans: yes, that is the night of New Orleans versus New England, but that game will probably come down to the last possession anyway. You've got until at least 8:30 p.m. before you'll need to check the TV.]
Posted by Sara Piasecki at 7:49 AM 1 comment: