The two habits of highly successful physicians (or dentists)

Upon opening a preservation folder stuffed with loose issues of The Proceedings of the Institute of Medicine of Chicago (about which more some other time, perhaps, if it all pans out), my eye fell upon:

There are many stories of Dr. Black's marksmanship with the rifle.

This was made possible by the fact that the loose issue on the top of the stack which I removed from the folder is missing its first two leaves, hence dropping the unwary unwrapper directly into the "Personal Recollections of Greene Vardiman Black," a biography of the great American dentist.

On Tuesday, I happened to be involved in correspondence between two prominent local doctors ("cc" is the greatest thing to happen to mail in a long time), one of whom asked the other:

Last week, I was reading up on the second dean of the University of Oregon Medical School, prominent surgeon, physician, and educator Kenneth A.J. Mackenzie, MD, and was treated to paragraph after paragraph about his prowess as a hunter.

Conversely, I responded to queries today about both alumnus Donald Neilson, MD (noted cultivator of orchids) and Portland physician Robert Thornfeldt, MD (developer of a prize-winning rose) and recalled the horticultural prowess of fourth UOMS dean David W.E. Baird, MD--about which I have read paragraph after paragraph.

Do we detect a pattern here? Life and death: not just a job, but a hobby too! I blame Oregon, its climate and unspoiled wilderness.

Posted by Sara Piasecki at 2:57 PM No comments:

As every organization, institution, or business knows, eventually you have to back up your impression of success and achievement with hard numbers. "Show us the data!" cry funders, clients, and auditors. Numbers being soulless things, it can be a little wearying to crunch the statistics. Nevertheless, it must be done.

A general assessment of the OHSU Library collections is currently underway, to spot trends in purchasing, usage, interlibrary loan requests, et cetera. This task has been broken down by subject and parceled out to the library selectors. One of the nine subject areas assigned to me is, of course, history of the health sciences. Because none of the schools at OHSU have a formal history department, we aim to purchase narrowly to support the intermittent historical research of faculty and local interests, rather than collecting broadly to support a full historical curriculum.

This is a bit of a shot in the dark, as much collection development can be: prognostication (what new books will be read?) and conservatism (what old books will still be useful?) are both required. Happily, today's foray into Data Land indicates that we're doing a pretty good job of it. Recent materials are going out (195 titles circulated 381 times) and the older materials are also being used (circa 300 books published before 1970 have gone out since 2001). These numbers don't include the casual browse in the stacks, or pages photocopied from a book left on the reshelve carts. It looks like the history of the health sciences is pretty healthy.

The history that most people are familiar with--from school lessons on the Founding Fathers, college courses on the French Revolution, et cetera--is a history that’s already been worked out. To some extent, at least. And often more than once.

When you work with primary sources every day, and nearly every other day encounter primary sources that contradict one another, or leave obvious questions unanswered, or challenge long-held community assumptions, it can be a bit disconcerting. This can lead to a general sense of uncertainty: Is this accurate? Is he right? Didn’t I read something else about this the other day?

Left untreated, daily uncertainty can lead to paralyzing inaction, or, conversely, statements of certainty made on a basis of evidence that is very likely to be overturned. This results in a conundrum for the reference librarian (perhaps more than it does for the practicing historian, who's job is historical analysis and theorizing). Does every patron really want the mountain of sources pertaining to the selection and acquisition of Marquam Hill (Did the railroad know what they were buying? Did Mackenzie really mean to establish a Portlandic Acropolis?), or can we just say with a degree of certainty that the railroad wasn’t too interested in the land after all and Mackenzie happened to be the company surgeon with an idea for a new school building on some available piece of land in the general area?

Alas, we don’t have that personal letter from Mackenzie to the railroad owner saying, in effect, “Hey, I know you’ve got that hill you’re trying to unload; how about you give it to me for my ode to Grecian architecture and I give you some free surgery in return?” The rub is, we also don’t have a letter saying the opposite; we have very few letters at all. There’s a hole in history, right there.

When faced with these holes in history, how can we darn our way across to the other side? When someone asks, 120 years later, what was A.D. Bevan doing in Wardner, Idaho, in 1889—if indeed this is even the same A.D. Bevan as the noted surgeon who began his career at the University of Oregon Medical Department and ended it at Rush Medical College—what do we say? We see Bevan in 1888 and we see Bevan in 1901, he seems to be splitting his time between Oregon and Illinois, but we can’t say he was in Portland in 1889. We also can’t say he wasn’t. We have a hole there. So we take a stand (we don’t think he was living in Wardner), sternly intone Caveat emptor, and move on. On to tomorrow, when maybe we’ll get the minutes from an 1889 meeting of medical men in Portland where the notetaker writes in the margin, “Bevan, in from Wardner for tonight’s meeting.”

History is meant to be rewritten. So pardon our faulty, linty version, with thin spots remaining around the heel. When more evidence comes to light, the story will be retold. Maybe even by you.

(And you thought it was going to be a euphemism for damning history.)
Posted by Sara Piasecki at 12:06 PM 1 comment: 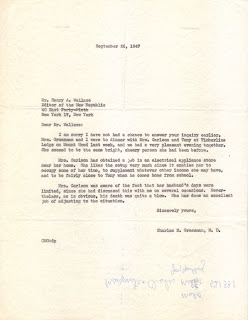 Belated notice of this evening's lecture on the history of Kaiser Permanente in the Portland area crossed my desk today. Tom Debley, Director of Heritage Resources for KP and author of the recent book, Dr. Sidney Garfield: The Visionary who Turned Sick Care into Health Care, will be speaking tonight at 7:00 p.m. at Portland State University. More details are available on the PSU web site. For those interested in the subject who are unable to make it to tonight's event, you can still find the stream of Debley's 2006 lecture on Northern Permanente on the OHSU History of Medicine Society Lecture Series web site here.

A bit of serendipity brought some pertinent primary source material on the history of Kaiser in Portland and Vancouver to our collection today. Dr. Charles M. Grossman, MD, located an old folder of correspondence marked "1944" in his files and brought it in to add to the growing collection of his personal papers. The letters are primarily from 1945, despite the folder labeling, and contain details about the organization that Grossman encountered when he first came out to the Pacific Northwest from Yale in 1944.

Missives to Lucy Hacker, MD, and Joseph Kriss, MD, (both of whom were recruited to Vancouver shortly after the letters were written) talk about the typical case load, the development of formal training programs, and the recruitment of the medical staff. There are also a number of letters pertaining to Grossman's study of pneumonia incidence (later published in the Kaiser Bulletin), and several relating to his application for a Navy commission. There is also one letter to Henry A. Wallace, then editor of the New Republic, describing his meeting with the widow of Evans Carlson shortly after his death. That letter is reproduced here.
Posted by Sara Piasecki at 1:22 PM No comments:

The October issue of the Dean's Update from the OHSU School of Medicine carried a notice of Connor's passing, and the school also put out a longer release on October 29.

We find that we can add little to the short obituaries noted above, except to highlight two of our favorite bits of information about Dr. Connor:

A longtime Lewis & Clark enthusiast, Dr. Connor spent several days in the History of Medicine Room in early 2006 (and undoubtedly countless hours outside of it) recreating the daily diet of the men on the Expedition from their departure in 1804 until their return in 1806. He presented his findings to a rapt audience of students in the history of medicine elective class; we posted a recap here.

Dr. Connor was a vibrant member of the OHSU community and the Portland community at large. His absence will be felt by many.

UPDATE, Nov. 3: The Oregonian has a long article on Connor in this morning's Metro section.
Posted by Sara Piasecki at 9:12 AM No comments: