New exhibit: "Music of the Heart: Rhythms and Murmurs" 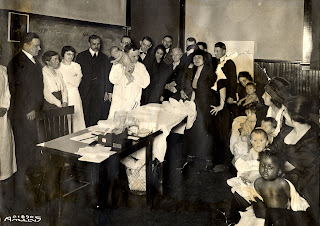 This afternoon, the lobby of the Main Library will be the site of the quarterly rite "The Changing of the Cases." Swan will come out, and a new exhibit will go in. It can be as much fun to watch the install as to see the display in place, so if you're free and want to see the action--come on by!

"Music of the Heart: Rhythms and Murmurs"
Celebrating the important advances in cardiology made here at OHSU, this exhibit showcases artifacts, photographs, books, and manuscripts from the Medical Museum, Historical Image, and History of Medicine collections, as well as the papers of Howard J. Stroud and Melvin P. Judkins.

Focusing on the study and repair of the rhythm of the heart, the display features early works by R.T.H. Laennec and James Mackenzie, binaural and monaural stethoscopes, heart casts and models, artificial valves and pacemakers, and cardiology research conducted at OHSU in the 1950s and 1960s.

The exhibit will be up through January 2010; a web component will be available soon.

[Shown here: image of direct auscultation of an infant, People's Institute clinic]
Posted by Sara Piasecki at 11:34 AM No comments:

The early history of medicine in the Pacific Northwest is dominated by relatively few characters, and the popularity of stories about John McLoughlin in Oregon City and Marcus Whitman in southern Washington tend to obscure the narrative about medicine in other parts of the Oregon Territory.

What about the Upper Willamette Valley, for instance? In 1941, Leonard Jacobson wrote: "Historically, little has been said about this portion of the Oregon Country. It did not have its John McLoughlin or its Dr. Whitman to make exciting chapters for later historians to record. Its Native inhabitants were peaceful and friendly to the incoming white settlers--no massacres or Indian wars interrupted the agriculture and homemaking pursuits of its early pioneers."

Ah! The curse of living in uninteresting times. Happily for us, Jacobson took up the cause of our nearly forgotten forebears and wrote their story (undoubtedly urged on by his professor, Olof Larsell, who was trying to collect material for The Doctor in Oregon). A recent patron request called my attention to Jacobson's piece, called "Some notes on early beginnings in the Upper Willamette Valley and a description of medicine practiced in that country up to 1880," which was read before the Medical History Club at the University of Oregon Medical School in 1941.

(Interestingly, a handwritten note dated August 7, 1959, accompanies our copy and reads in part: "I am writing this to slip in with the last pages which Dr. L. Jacobson has kindly had typed for the U. of O. Library copy of his manuscript." It's unclear what was changed, although pages 18, 20, 25, 26, and 27 are much brighter than the others and are on different paper stock.)

Jacobson makes a fairly detailed account of early Native American health and medicine in the area, citing the accounts of Alexander Ross, Jesse Applegate, John Scouler, and John Minto, before introducing Andrew W. Patterson, M.D., the first "bona fide medical doctor" to arrive in Eugene in 1852. Patterson had graduated from the Pennsylvania College of Medicine in Philadelphia in 1841 and come across the plains on horseback. Why Eugene? As Jacobson notes, "The need for doctors in that early settlement could not have been very great at that time, for, instead of depending on the collection of infrequent medical fees for a livelihood he entered the government employ as a surveyor and soon afterward accepted the contract for the first survey work to be done in that region."

Whatever his reasons for settling in Eugene, Patterson would go on to make lasting contributions to the early development of the city well beyond medicine. Despite his civic and social activities, he maintained an active practice; in 1869, the now busy Patterson partnered with Abram Sharples, MD. The experienced Sharples was also on the faculty of the Willamette University Medical Department as professor of anatomy. Salem to Eugene is a heck of a commute now, but imagine doing it on horseback...

As the city's population grew, it also attracted W.H. Hanchett, M.D., who arrived in Eugene in 1859. Lacking much in the way of published information about Hanchett, the resourceful Jacobson recounts the oral testimony of Trena Dunn Williams (who would have been 85 at the time of writing in 1941) and her recollections of Hanchett and early medical treatments. This bit of the paper is really entertaining. Williams recalled, in part:

"Until I was a young woman in my early teens there was no mortuary in Eugene. People "sat up" with the dead in private homes. The young people of the town were generally requested to serve in this capacity. Of course, we never refused but always some one older than I attended to 'changing the cloth' on the face of the dead."

Makes one appreciate the summer jobs afforded by modern technology.

For more on Patterson, Sharples, and Hanchett, check out this article by Effie Knapp in Lane County Historian, hosted by Oregon State University's ScholarsArchive.
Posted by Sara Piasecki at 11:57 AM No comments:

Kuru correspondence and more: additions to the Bush-Dow Collection 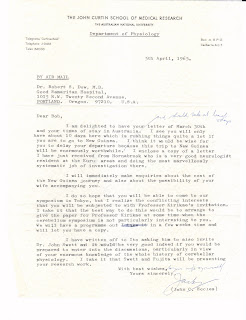 One notebook contains about 80 of Dow's reprints, collected by Bush during the course of his research.

The other contains original correspondence between Dow and other prominent researchers of the day, such as Sir John C. Eccles, Masao Ito, I.S. Cooper, and Richard Hornabrook. Many of the letters concern Dow's trip to New Guinea in the fall of 1965 to study kuru--a trip on which his wife accompanied him, having been assured by Hornabrook that "There is certainly no particular haszards [sic] associated with a visit and many people often of advanced age have made the journey here." (He also agreed with Dow's plan to bring only "tropical business clothes with low shoes.")

After Dow's return to Portland in October 1965, he corresponded with executives at Tektronix about corporate sponsorship of a cerebellum symposium and with researchers invited to the event, which took place in May of 1966. Letters arranging other speaking engagements follow, along with more communication with researchers around the country. A tension-filled exchange of missives with Portland colleague Robert Grimm, MD, highlights important aspects of the evolution of local neurology residency programs--and the high stakes of medical politics.

These letters provide a unique insight into the culture of neuroscience research in the 1960s and into the life and career of Dr. Dow. Until such time as the materials are fully processed, inquiries about particulars can be made by emailing us directly.

[Shown here: Eccles to Dow, April 5, 1965. Concerning arrangements for trip to New Guinea, and potential conflict between Dow and Professor Kirikae at the upcoming Tokyo symposium.]
Posted by Sara Piasecki at 2:26 PM No comments:

Not just an academic exercise

Some time ago (longer than we realized, in fact), we shared some musings on the obsolescence of knowledge and the challenges of choosing what, in effect, will be saved for The Future. Despite the rhetorical nature of our musings, this is not merely an academic exercise, whether in this small repository or in the world's biggest museums.

To call attention to this problem, University College, London, has mounted a new exhibition called Disposal. New Scientist has posted seven images from the show on its web site--images of artefacts that might need to be weeded to make room for the rest. At the end, you can comment on which item you find least worthy. Will it be the Agatha Christie picnic basket? The Fleming glass lantern slide?

The UCL show also featured an event called "Fight at the Museum: Rescue My Object!" on October 20. While this undoubtedly provided some outstanding entertainment, it's a little too reminiscent of gladiatorial contests for my taste. History has long been written by the victorious, and we like to think that archives and museums can help redress that imbalance by seeking out and preserving the remains of the losers as well. (Not literally. At least, not as a rule).

In the current economic climate, many cultural institutions are facing major cuts in funding that impact the entire scope of their activity, from collections care to educational programs to open hours, and the role of the loving amateur, the enthusiast, and the collector in the preservation of our cultural heritage is becoming more important. Take the New Scientist challenge. Test your ability to choose the cultural Elect. You may be faced with a similar decision of your own, sooner than you know.
Posted by Sara Piasecki at 12:00 PM No comments: