Hard to bring a good man down 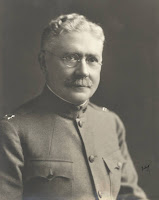 Reading through some information on the life and times of Kenneth Alexander James Mackenzie, MD (1859-1920), founding member and second dean of the University of Oregon Medical School, I came across an editorial printed in Northwest Medicine (19:104, 1920) less than a month after Mackenzie's death at the age of 61 on March 15, 1920.

Evidencing the interests of editor and reader alike, nearly half of the two-page eulogy is dedicated to the causes of Mackenzie's death. These are many, but whether they are scientifically proven or postulated for the greater glory of the subject is unclear. While the proximate cause seemed indisputably to be angina pectoris, this is traced back to an infection Mackenzie developed after a surgical operation "about 1900", which led to acute endocarditis. In addition, we learn that he had been weakened by acute gastroduodenitis and cholecystitis which necessitated six weeks of bed rest during the summer of 1919. Also blamed is a bout of influenza that came upon Mackenzie two weeks before his death.

"He was greatly affected by it and on many occasions discussed it publicly in a manner characterized by vigor of expression, courage and high patriotism. There was but one side of the fence for him. He wanted the war fought and fought to a finish and no one who ever heard him discuss it was in doubt as to where he stood.... He was omnipresent, enthusiastic, encouraging and active in the prosecution of the cause of the Allies against the Hun.... and it is not impossible that he gave his life for his country quite as much as they gave theirs who died upon the battle fields of Flanders."

I think there's a research paper in this. Do obituaries written by medical men for medical men tend to exaggerate the causes of death, to make the defeat seem the more noble, or excusable? If only some do so, is it a reflection of the culture in which the piece was written--the deification of the physician above the ordinary man, the setting apart of this special breed who care for the suffering, the diseased, the lame? What do these memorials tell us about physicians' self-perceptions and about the funerary practices of the cult of Asclepius? Discuss!
Posted by Sara Piasecki at 1:22 PM No comments:

A short announcement that the OHSU History of Medicine Lecture set for November 6 has been cancelled. We hope to reschedule Dr. Ellen Magenis' talk on the history of cytogenetics for a later date.
Posted by Sara Piasecki at 1:21 PM No comments: 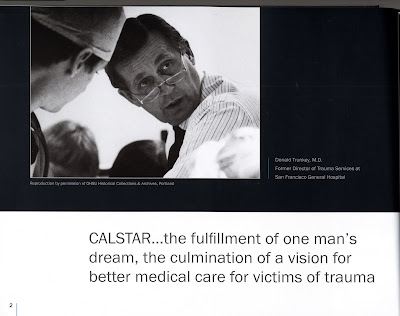 CALSTAR, the California Shock Trauma Air Rescue system, is celebrating its silver anniversary with the publication of a glossy history, CALSTAR: 25 years of life-saving flights. What does an air ambulance program in California have to do with OHSU, you ask? From chapter one, paragraph one, sentence one:

The story of CALSTAR, the premier air ambulance service in California, begins with the convergence of three mean--three determined men, who were responsible for turning a dream into reality: Dr. Donald Trunkey, Tom Drohan and Marvin Krasnansky.

The writers contacted us earlier this summer for an image of Dr. Trunkey, which we were more than happy to provide. It graces page two, prominently placed at the very beginning of the story. In return, CALSTAR graciously sent us a copy of the book for our Pacific Northwest Archives. Watch for it to return from cataloging, and learn more about Trunkey's contributions to CALSTAR's development. In the meantime, you can read a short history on the company web site.
Posted by Sara Piasecki at 7:53 AM No comments:

In addition to some digital photographs, Division Manager Michelle Bechtholdt deposited the program and dinner menu from the evening event and the materials from the weekend "state of the art educational conference."

The dinner program gives a short history of kidney transplantation at OHSU, and is reproduced here. For more information, you can, of course, contact us! 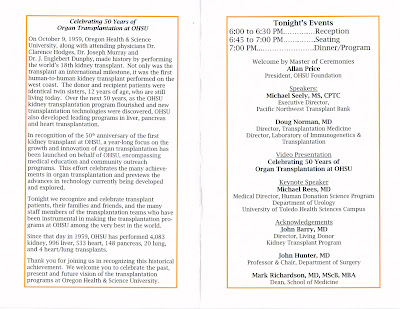 (And yes, there was vanilla creme brulee for dessert.)
Posted by Sara Piasecki at 2:58 PM No comments:

O'Dea Day: three donations in one

Yesterday, James E. O'Dea, M.D., University of Oregon Medical School Class of 1965, brought us a carload of materials for the collections. The haul can be divided into three separate donations, all of great significance.

Accrual to North Pacific Pediatric Society Records, 2009-002
To the NPPS collection originally delivered by Oliver Massengale, MD, O'Dea has now added a portrait photograph of JB Bilderback, MD, and a large composite of photographs of NPPS presidents. We also received a copy of S. Gorham Babson's history of pediatrics, signed by all the authors, program and meeting materials from the Society's 2009 conference, and other miscellaneous ephemera.

Books for the History of Medicine Collection
O'Dea has given us our first copy of the first American edition of Henry Gray's Anatomy: descriptive and surgical (Philadelphia : Blanchard and Lea, 1859), which he purchased for $25 at an estate sale years ago. He also brought Calvin Cutter's First book on analytic anatomy, physiology and hygiene, human and comparative (Philadelphia, J. B. Lippincott & co., 1872)--this copy was formerly in the library of the old Friends College (now George Fox) in Newberg, Oregon. Finally, he also donated Wilhelm Henke's Topographische Anatomie des Menschen in Abbildung und Beschreibung (Berlin, Hirschwald, 1878. Erste Halfte, Tafel I-XXXVIII).

Wilbur Nelson Van Zile Papers
Lastly, but oh, so not leastly, Dr. O'Dea delivered the material remains of the estate of Dr. Wilbur Nelson Van Zile, D.D.S., who passed away without heirs in February 2009, aged 104. At the time of his death, no obituary was published. We have managed to quickly glean some information about Van Zile from his papers: 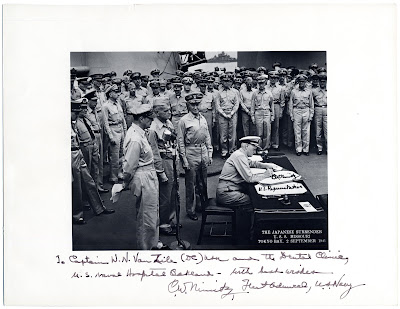 Van Zile was born August 24, 1904, in Paterson, NJ. As a young man, he moved with his family to Pasadena, CA. He received his undergraduate degree from the University of Southern California and his DDS from the USC College of Dentistry in 1928. From 1928 to 1934, he was in private practice in Pasadena. In 1936, he joined the US Navy, beginning a long and distinguished career as a Navy oral surgeon. He served as chief of the dental service in the USN hospitals in Guam (1939-40), San Diego (1941-42), Corona (1944-49), Oakland (1950-56), and St. Albans (1956-59). During World War II, he was responsible for the administration of all dental affairs in the South Pacific Theater of Operations under Admiral William Halsey, Third Fleet. He achieved the rank of captain in 1950. In that same year, he instituted the Navy's graduate residency program in oral surgery at the USN Hospital in Oakland, CA. He retired from the Navy in 1959.

After retiring, Van Zile began his second career, coming to Oregon to serve as the first chair of oral surgery at the University of Oregon Dental School. He retired as professor emeritus in 1969. During his forty years in dentistry, Van Zile published several papers, developed a widely-used surgical technique for removal of the coronoid process, and patented an instrument for root canal surgery (Patent No. 2436623). Judging by quick peeks at the two carousels filled with personal slides, he was also quite a gardener.

Here, truly, is a biography waiting to be written.
Posted by Sara Piasecki at 1:13 PM No comments:

This weekend, I traveled down the valley to meet a donor and collect a book. John D. "Jack" Flanagan, M.D., is a 1944 graduate of the University of Oregon Medical School who has spent the greater part of his life in Coos Bay, Oregon, where he maintained a surgical practice until his retirement in 1980. In 1998, Dr. Flanagan participated in our Oral History Program; the transcript from that interview is available from the Main Library.

The item being donated is probably the fourth edition of Thesaurus chirurgiae: the chirurgical and anatomical works of Paul Barbette, printed in London in 1687. (I say probably because the title page is lacking--about which, more in a minute.) It is bound with Medicina militaris: or, A boby [sic] of military medicines experimented (London, C. Shortgrave, 1686) and Cista militaris, or, A military chest, furnished either for sea, or land, with convenient medicines, and necessary instruments. Amongst which is also a description of Dr Lower's lancet, for the more safe bleeding. Written in Latin, by Gulielmus Fabritius Hildanus (London, printed for C. Shortgrave, 1686). 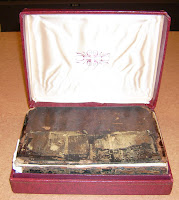 The text of the work is remarkable on its own. Translated out of the Dutch and into English, it is a practical manual for the busy 17th-century surgeon (and they were busy: think Thirty Years' War, English Civil War, Dutch Revolt, etc.). Barbette was highly regarded in his day, though he contributed little that was new. Nevertheless, the writing sheds light on the continuing struggle, in these years of Harvey and Tulp, between the wisdom of the ancients and the discoveries of contemporary scientists. Barbette writes:

"But seeing that the study of some most curious Anatomists, hath found out many excellent things in this happy age, altogether unknown to the Ancients (though some foolishly affirm the contrary, with great pains, ascribing those things to them, which they never so much as dream'd of)..."

and elsewhere "we assent not to Galen," but then describes in precise terms the nature of the sanguine, choleric, phlegmatic, and melancholic types and the proper treatments for each.

The text also provides insight into 17th-century warfare and military medicine, from the treatment for gunshot wounds to the more mundane aspects of the surgical service:

"I had all these instruments, and many more, made me by a skilful Artist in Silver, which I used only within the Town, Patients being less afraid of them than of Iron: but at Sea and at Camps it is not so safe for a Chirurgeon to have them of Silver, therefore they may be very conveniently made of Iron or Steel, except the Probes, which ought to be made of Lead, Copper, or Latin." 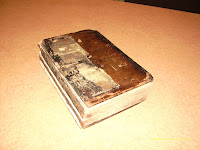 And we even get advice on medical cooperation and organization: "These two, physitians and chirurgeons, are to be intimate friends together, assisting one another without envy and pride, for the better relief and the greater safety of their patients."

Inside the front cover of this particular copy is a list of "Owners of this book", starting with John Anderson's acquisition of it in 1690 and continuing down to J.D. Flanagan, who was given it at Christmas time in 1963 by I.R. Tower. The book was heavily used by its previous owners, as evidenced by its spine (completely broken in two places), the frequent underlining and marginal marking, and the fact that at least a few pages seem to be stained with drops of blood. Additionally, the book went through at least two major fires, both in Coos Bay, in 1919 (the same year as the fire at the Medical School on 23rd and Lovejoy) and in 1922. It had been kept in a jewelry box in a safe for the past several years, to safeguard it from further vicissitudes. A few photos are included here.

Definitely a "working copy," this Barbette is nevertheless priceless to us for its rich history--scribbles, soot, stains, and all.
Posted by Sara Piasecki at 8:20 AM No comments: