The book includes detailed diagrams of the machine constructed by Kempelen and of the human vocal apparatus. A working copy of Kempelen’s voice synthesizer has been reproduced using the text, and is on display at the Deutsches Museum in Munich (see some photos online here).

The first edition of Kempelen’s work is extremely scarce, as are later reprints, and the text is not available digitally. Dr. Sproat and the OHSU Library will investigate the possibility of digitizing this item while it is on loan. Of note: This particular copy is from the collection of Andras Gedeon, author of Science and technology in medicine: an illustrated account based on ninety-nine landmark publications from five centuries (2006).

We extend our great thanks to Dr. Sproat for sharing his Kempelen with the OHSU community and researchers throughout the Pacific Northwest. Researchers interested in artificial speech and phonetics are encouraged to contact us for more information.
Posted by Sara Piasecki at 1:33 PM 1 comment: 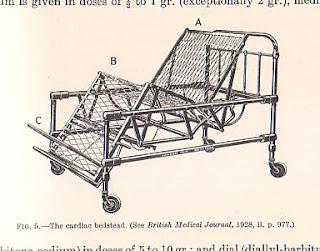 If three days of heat over 90 degrees makes an official heatwave (at least here in Portland, Oregon), does a streak of more than three consecutive days with material donations make a donations-wave? Material mania? Print pandemic?

Whatever we choose to call it, it is indeed true that today we took in a donation of classic medical texts from the library of Paul R. Vogt, M.D., University of Oregon Medical School Class of 1936. Included in the bundle were a first edition of Campbell's Operative orthopedics (1939) and Lewis' Diseases of the heart (c1933, 1934 printing).

It was a bit surprising to find that the library didn't already have a copy of Lewis' widely acclaimed book, intended as "the outline of my clinical teaching on diseases of the heart" (preface)--which in 1933 was extensive and internationally recognized. The likely scenario is that the library did have an original edition, perhaps even multiple copies thereof, which each wore out or walked out, leaving us with none. Which is why donations are such nice things.

We also received a few atlases of surgical orthopedics and other textbooks of orthopedic procedures in the donation. Contact us for a complete list.

(Shown here is an image of the "cardiac bedstead" designed by Lewis. One wonders whether the frame and the "wire mattress" which was placed across it ever unintentionally amplified electric cardiac stimulation...)
Posted by Sara Piasecki at 2:25 PM 1 comment:

Scholarly communication in an analog age

This week's visit from Dr. Charles Grossman brought another reminder of how academic medicine has changed during his 60-plus years of practice. In an exhibit we might call "When I was your age, we had to send away through the mail to get reprints!", we could display the piles of postcards Grossman received--and saved--over the course of his career. The stack of reprint requests for his article on mushroom poisoning alone teeters in at over 3 inches tall. The mail came in from around the country and different corners of the globe. A handful are shown here. 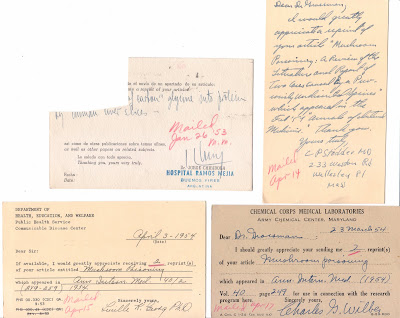 Side note: Dr. Grossman, who attended the celebration of the 60th anniversary of the founding of the People's Republic of China two weeks ago, is writing up his experience for the U.S.-China Review; interested readers should check its pages for that report.
Posted by Sara Piasecki at 7:09 AM 1 comment:

Donation number two from yesterday afternoon is a small collection of ephemera related to the dental hygiene program at the University of Oregon Dental School, dating from the period 1965-1967. Emerita Barbara Marquam brought us these materials, which document a period in the history of one of the earliest dental hygiene programs in the Pacific Northwest (1949 was the inaugural year). 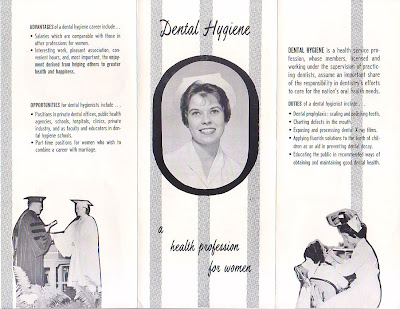 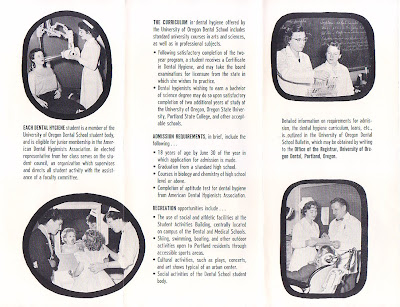 Posted by Sara Piasecki at 8:10 AM No comments:

A quick note on a very busy day: A new donation this afternoon has brought us hundreds of pathological slides from the library of James Kidd, M.D. Kidd was chief of pathology at Children's Memorial Hospital in Chicago, and subsequently retired to the Portland area. Many of the slides are marked with information identifying the patient, which would be of great help in making a survey of the specimens. A quick glance tells us that the collection has many examples of neoplasms, such as Wilms tumors and leukemias; systemic diseases, including lupus erythematosus; and more routine diseases such as influenza and pneumonia.

In addition to the slides, we received two instruments: a Spencer Bright Line Haemacytometer and a nearly pristine Whiteman 13.8 Hemometer, both in their original cases with the original paperwork, both probably from the 1940s or 1950s.
Posted by Sara Piasecki at 1:43 PM No comments: