Join us at lunchtime today for the season opener of the OHSU History of Medicine Society Lecture Series:

Dr. Brian Morrison received his medical degree from the University of Illinois School of Medicine in 1987. He completed his internal medicine training at the University of Colorado Health Sciences Center in Denver, a fellowship of cardiology at the Massachusetts General Hospital at Harvard Medical School, and a senior clinical fellowship at Boston Children’s Hospital. He spent a year at the Adult Congenital Heart Disease Center at the University of California at Los Angeles, serving as an instructor and staff physician. He joined Cardiology Consultants in Medford in 1998. Dr. Morrison also has an appointment as Clinical Assistant Professor of Pediatrics at OHSU. He specializes in pediatric and adult congenital heart disease and in acquired adult cardiac disease, and is an expert in transesophageal echocardiography and nuclear cardiology imaging techniques.

In addition to his interest in history, Dr. Morrison is an avid collector of rare and antiquarian medical books. He will be bringing some volumes from his private library to share with attendees after the presentation.

The lecture is free and open to the public. If you're unable to attend in person, you can catch the streaming video of the talk, available a week or so after the event.
Posted by Sara Piasecki at 6:30 AM No comments: Links to this post

Birth of the bitewing

We're preparing for an open house this Saturday to coincide with the OHSU School of Dentistry Alumni Association's annual Cantwell Memorial Back-to-School Lecture and Margaret M. Ryan Dental Hygiene Update (talk about a mouthful--but, this is dentistry). It's a great opportunity for us to showcase selected items from the History of Dentistry Collection, the Pacific Northwest Archives, the Historical Image Collection, and the manuscripts collection.

In addition to the oldest book in the HOD Collection (Fox's 1814 Natural history and diseases of the human teeth) and one with G.V. Black's presentation inscription to Frederick B. Noyes (Operative dentistry, bacteriology and pathology of dental caries, 1903), we're bringing out the first edition of Elementary and dental radiography by Howard Riley Raper. Published in 1913, this was the first American text on the use of x-rays in dentistry. Raper, who spent most of his career at Indiana University School of Dentistry, was also the first to introduce the bitewing technique.

We've pulled yearbooks, catalogs, and curriculum materials from the dental school and its predecessor institution, North Pacific College; materials from both the Henry Cline Fixott Dental Radiography Collection (2008-009) and the Robert E. Marsh Papers (2009-018); and a large pile of photographs of dental faculty and students. Maybe we'll finally be able to put some names to the faces in those "miscellaneous" pics!
Posted by Sara Piasecki at 1:34 PM No comments: Links to this post 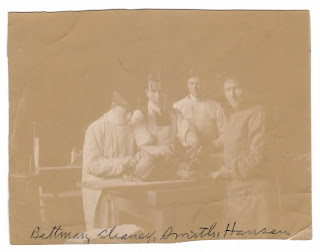 As a child, I always assumed that the adjective "gross" when applied to anatomy was descriptive of its desirability as a pastime. Of course, it's meant to draw on the meaning of gross as "large" or "broad"--anatomy on the macroscopic, rather than microscopic level.

Childhood connotations do occasionally return when we view some of the early photographs of medical dissections, taken before the advent of modern embalming techniques. The two faded images seen here were shot on the same day, probably in 1903 or 1904, and donated to the archives, probably by University of Oregon Medical School alumnus A.G. Bettman, MD. ("Probably" is about as good as it gets in the archives some days!)

Since the prints have been helpfully labeled, we can say with certainty that the four students are Adalbert Bettman, Fred Chaney, and William E. Smith, all graduates of the class of 1907, and one Agnes Hansen of Reedville, OR, who was listed as a student during the session of 1903-1904. (Thanks to Kimberly Jensen and her amazing knowledge of women matriculants for that identification!). Agnes apparently never graduated from UOMS. The Pacific medical journal for June 1908 indicates that an Agnes C. Hansen, M.D., received a degree in pharmaceutical chemistry from the College of Physicians and Surgeons of San Francisco in May of that year; could this be Agnes from Reedville? If so, where did she complete her medical degree, and why did she leave Oregon? More questions for a rainy day... 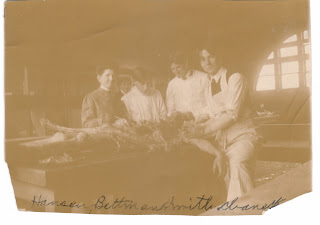 We all know that we should never assume that any email makes it to its destination, yet we're always so disappointed to find out that messages have become ghosts in the machine. Once again, we've been made aware of the fact that OHSU email servers are struggling to receive and deliver emails from external (primarily commercial) service providers. This may mean you. If you've emailed us and haven't heard back, please try again--by phone or snail mail if necessary--because your email was probably lost in transit.

On a lighter note, those of you seeing this message in a feed reader might not be aware that we had, until today, featured a quote from Harry Truman in the banner of this blog. In honor of Oregon's sesquicentennial, we've changed the signature quote to one by hometown boy Ken Kesey. Another good reminder to us all that history's remains will still be here next week, when we finally receive your postal letter--although our interpretation of it may have changed by then!
Posted by Sara Piasecki at 8:10 AM No comments: Links to this post

Rooting around in the Albert E. Mackay Papers (Accession 2002-005), we find a great deal of correspondence about the rededication of Mackenzie Hall (formerly known as the Medical Science Building) and the campaign to fund the creation of a bronze plaque commemorating Kenneth A.J. Mackenzie, M.D.

The commission for the plaque, which was to bear a likeness of the deceased Mackenzie, was awarded to the artist A. Phimister Proctor. Proctor had recently heightened his reputation in Portland with the completion of a model for a statue of Theodore Roosevelt, commissioned in 1922 by Henry Waldo Coe (whom regular readers will remember was the owner and operator of Morningside Hospital). Proctor sent a sketch of the proposed design to Mackay and other members of the dedication committee: 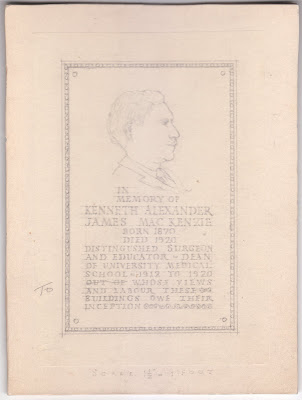 The lack of any reply from the medical school forced Phimister to write in enquiry. It was up to Dean Richard Dillehunt to break the bad news (click for larger image): 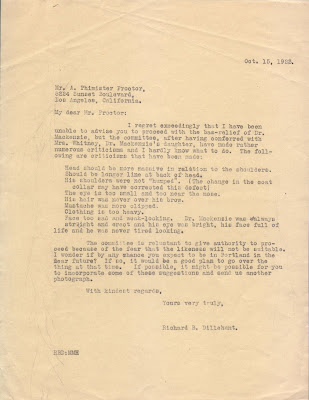 Proctor didn't seem too put out by the negative reviews; he went on to modify the design until it met with acceptance by all parties. One of the reasons for Proctor's patience with the process may be that he was a patient: the dedication files also include letters between Proctor and orthopedist Dillehunt concerning Proctor's bad hip. Nothing like a little free medical advice...
Posted by Sara Piasecki at 10:10 AM No comments: Links to this post