A wonderful donation of materials pertaining to Robert E. Marsh, D.M.D., sheds new light on student life at North Pacific College of Dentistry in the 1930s. Marsh, a 1934 graduate of what would become the OHSU School of Dentistry, practiced in Oregon and around the Northwest at CCC camps before signing on with the Veterans Administration in 1941. He passed away in 1988.

The small collection includes several photographs (including this group portrait of the dental fraternity Psi Omega taken in 1931; Marsh is in the second row from the bottom, third from the right), certificates and licenses, and two wonderful sketches of dental school faculty members Pierce and Paine--probably executed by a classmate of Marsh's. Thanks to the donor, son Timothy J. Marsh, we also have a wonderful biography of Dr. Marsh that highlights his upbringing, education (he was in the first class to graduate from Grant High), and career.
Posted by Sara Piasecki at 12:16 PM No comments:


Thanks to a generous donation from Dr. Donald Trunkey, M.D. and strong support from the OHSU Dept. of Surgery, over 150 classics in surgery are newly available to researchers at OHSU.

The books in the Dept. of Surgery's Trunkey Rare Book Collection are now listed in the OHSU Library catalog online and are available to scholars for on-campus use through either the department or Historical Collections & Archives. The collection includes many classics in surgery that were previously unavailable at OHSU, including Harvey Cushing's Surgery of the head and Alfred Blalock's Principles of surgical care.

Questions about the collection and its contents can be addressed to us here at homref[at]ohsu.edu.
Posted by Sara Piasecki at 1:06 PM No comments:

After hearing reports of readers unable to post comments, I made some changes to the settings of this blog. If you are newly unable to comment, still unable to comment, or otherwise experiencing technical difficulties with the posts, please do let us know. We're obviously outsourcing this project to Blogger, but we'll see what we can do locally to address issues as they arise.
Posted by Sara Piasecki at 3:39 PM No comments:

The School of Nursing dropped off another small jumble of materials for the archives yesterday, including this rather adorable little accordion fold book (the scan really doesn't do it justice; click on the image below for a larger version). Measuring in at 14 x 10 cm when closed, it opens out to an arm-stretching 100 cm.

Put together during the fundraising campaign for the new School of Nursing building on the Marquam Hill campus (groundbreaking 1990, completion 1992), the booklet even has delightful faux pavement (or faux roofing material) covers. It fairly screams shovel-ready!
Posted by Sara Piasecki at 2:53 PM No comments: 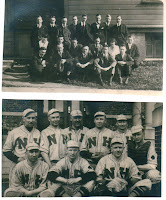 Thanks to a generous donor, one of the gaping holes in the Historical Image Collection has been filled--we think. Rhonda Clary, granddaughter of Dennis Swart, M.D., has sent us copies of two photos from Swart's early years.

The top image is very probably the University of Oregon Medical School Class of 1918, gathered together at the old school building at 23rd and Lovejoy downtown (the cornerstone for the new building on Marquam Hill had just been laid in May 1918). Swart is in the first row, all the way to the right. Twenty-one newly-minted doctors graduated from UOMS in 1918, including two women (Estella Ford Warner and Kathryn Rueter).

The bottom photo is more of a poser: Swart is shown here, middle, front row, but what are these uniforms? There are crosses on the sleeves, reminiscent of the Red Cross symbol. Swart did see some military service after graduating, but was back in Portland in 1920 or 1921. As far as we know, there weren't any hospitals with the initials "NH" in the Portland area at that time. Could this have been while Swart was on assignment at the end of World War I?

What do you think? Any ideas on "NH"? Comment here or email homref[at]ohsu.edu
Posted by Sara Piasecki at 12:42 PM 1 comment: