Happy anniversary to us!

Well, last year, August 20 came and went without recognition, and it might have done so again (had I not remembered in advance of the upcoming week-long hiatus of posting), but we will pause here briefly to celebrate our third birthday.

Three years doesn't seem like much in the context of History (in which we are steeped daily here), but in the web world, it's a real milestone--or so I'm told. We have produced 705 posts on topics from collections maintenance and management to nursing caps to university name changes to dentists' skills in basketball to sixteenth-century medicine and a lot of things in between.

In the process, we've found a lot of friends out there in Google-land, corrected some erroneous information in the collections, and received donations of materials, time, and knowledge from near and far. We've certainly enjoyed connecting with you, and we hope you've been interested in some of what we've posted here.

That said, we are going quiet for another week, to reconnect with what many people sardonically call "First Life" (if you don't get the reference, don't worry: you're safe from the intended disdain.) If the creek don't rise, we'll be back on August 24 with more tales from the crypt--or storage, or the stacks, or whatever you care to call it.

(Our 2007 birthday post, for the really rabid fan, is available here.)
Posted by Sara Piasecki at 2:05 PM No comments: 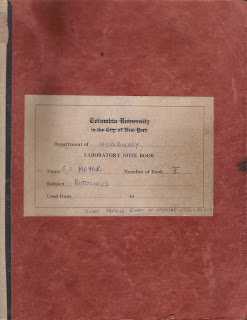 On Friday, we took in more than double again the amount of material we first received from E. Alan Meyer, ScD., and his wife Barbara from their lab here in the Dept. of Molecular Microbiology and Immunology. In this haul were about thirty notebooks of experimental data from the lab, including Meyer's early notebooks from his time at the Johns Hopkins School of Hygiene and Public Health, as well as over 80 books on microbiology, bacteriology, and parasitology, several videos on parasitic diseases, and even a small handful of cool glassware.

There is definite evidence of Meyer's strong international collaborations, with books in Russian and Romanian bearing their author's inscriptions to Meyer.

Meyer, an internationally-known expert on Giardia, received his A.B. from the University of California, Berkeley, in 1949, his M.S. from Purdue University in 1953, and his ScD from Johns Hopkins in 1958 (where he wrote his thesis on "Studies in the discreteness of botulinal toxin and hemagglutinin"). He also spent several months in Czechoslovakia in 1988 on a Fulbright Scholarship.

A full inventory of the collection will be available upon request until the materials are physically processed. (See also this post for an image of Giardia, from the earlier accrual of the Meyer Papers.)
Posted by Sara Piasecki at 1:51 PM No comments:

Portland hospitals at the turn of the century

Looking for images of the hospital facilities that would have been available to the Portland medical community in 1918 when the influenza pandemic struck, we assembled these photographs of:

Multnomah County Hospital (in its "pre-Hill" location at Second and Hooker Streets downtown, with 65 beds; this image in the Historical Image Collection) 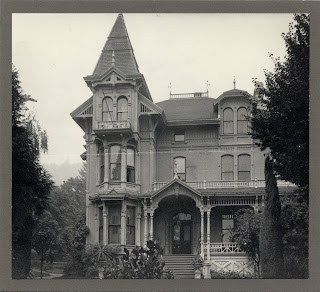 St. Vincent Hospital (sometime after the 1895 move to Westover Road, with ca. 400 beds; this image from an undated scrapbook in our collections) 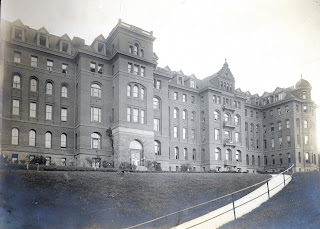 and Emanuel Hospital (sometime between 1915 and 1939, with 60 beds; this image from a history of the hospital written by Lew Hurd in 1939, and deposited in the PNW Archives Collection) 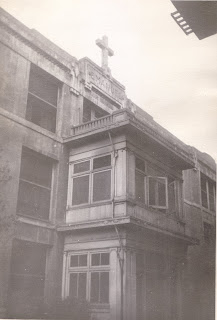 No wonder they had to convert Civic Auditorium into a makeshift hospital and erect tents in other city locations. A timeline of the influenza outbreak in Oregon is available from the DHS web site.
Posted by Sara Piasecki at 1:58 PM No comments:

This week, Charles Grossman, MD, brought us paperwork on several grants he was awarded in the 1950s, a few glass lantern slides from presentations, the telegram sent August 5, 1965, inviting him to the White House (framed!), and a small stack of reprints.

The reprints are of work by a handful of faculty members from the University of Oregon Medical School, including E.E. Osgood, Howard S. Mason, Thomas Fitzpatrick, and Carl E. Hopkins. "Carl Hopkins, you don't know that name, do you?" Dr. Grossman asked. Well, no, the name wasn't familiar, and we had no Biographical File on him. So Dr. Grossman obliged us with a few stories.

Hopkins was recruited to UOMS in 1947 (according to Grossman's recollection) by Dean David Baird, who was looking for more research-oriented faculty to join the group already in Portland. Hopkins had attended Darmouth College (where he wrote his undergraduate thesis on "War, peace, and education" in 1933), and Harvard (A.M., 1935 and Ph.D., 1948). As a staff advisor for UNRRA in Shanghai from 1946 to 1949, Hopkins learned to speak Chinese; later, he would write a memoir about his experiences there (and he and Grossman would travel together to China in 1974).

Hopkins joined the faculty of the Dept. of Public Health and Preventive Medicine at UOMS in 1949 under chairman Adolph Weinzirl. He taught biostatistics and epidemiology to students and to faculty; Grossman attended his informal sessions for faculty with "about 12 others", including researchers from Osgood's lab. When Howard Mason joined the faculty in 1952, he, Hopkins, and Grossman started a play-reading group for interested faculty and students.

While at UOMS, Hopkins wrote nearly twenty articles. The reprints deposited by Grossman today are for his papers on "Patterns for purchase of public health services in Oregon" (1952), "The absolute curability of cancer of the breast and statistical methods of evaluation in follow-up studies with technical supplement on statistical methods of evaluation" (1953), "Multiple sclerosis and the local weather" (co-authored with Roy Swank, 1955), and "Some remarks on the teaching of medical care in medical schools" (1959).

It was "medical care" that Hopkins was most interested in, according to Grossman--a topic near and dear to Grossman's own heart. Hopkins "did not find fertile ground here", said Grossman, for his ideas on utilization and costs of delivery of health services. So, after obtaining his M.P.H. from Johns Hopkins in 1957, Hopkins left UOMS in 1960 for a position as a research statistician at the UCLA School of Public Health. The UC Senate published a memorial for Hopkins at the time of his death in February 2002, which is available online.

While in Portland, Hopkins passed his skills as a statistician on to a cadre of researchers who went on to produce notable results of their own, and we are grateful to Charles Grossman for reminding us of his contributions.
Posted by Sara Piasecki at 1:46 PM No comments:

It's been a bit hectic here in Historical Collections & Archives, so just a quick note today on something that tickled our fancy: in an announcement concerning the 1868 graduation of the Willamette University Medical Department (about which, more later) published in the Pacific Christian Advocate on February 29, 1868, we read:

The present term of lectures closes this week. During the four months, about six hundred lectures have been delivered [!], and a daily drill in each of the departments of study. The examinations of candidates for graduation are now in progress. These are in writing, and seventy-five per cent. of correct answers is required. We question if any college in the United States demands so severe a test of qualification. [emphasis added]

I'm guessing that, after an average of 20 lectures per day--including Saturdays and Sundays--students' brains were only able to regurgitate something on the order of three-quarters of the stored information anyway, if you count name and address as part of the three quarters. (I actually took a class once where you did get points for putting your name on the paper, so it's possible.)

By the time of the Flexner report in 1910, clearly, the standards for graduation at WUMD (and at University of Oregon Medical School for that matter) were unacceptable. But for a while, we seemed pretty impressive, for a brand-new state...
Posted by Sara Piasecki at 3:43 PM No comments: