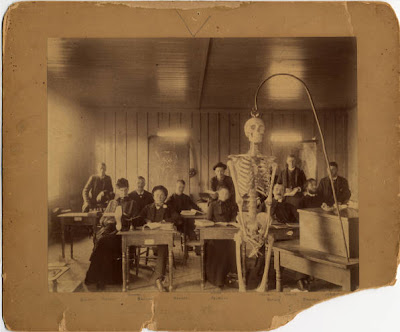 Those well-versed in the history of OHSU know that the medical school, known then as University of Oregon Medical School, merged with the Willamette University Medical Department in 1913. The merger would have seemed unlikely to those faculty who were around to witness the original break in 1887, when several WUMD faculty resigned in order to establish the rival school. This complicated and lively history is reflected in a handful of primary resources held in the OHSU Historical Collections & Archives. Happily, this scanty record can now be fleshed out to some degree with materials held in the Willamette University Archives and Special Collections.

OHSU has a smattering of catalogs and portions of catalogs from WUMD, and the published introductory address from 1867. Most significantly, OHSU holds record books covering the period 1878-1899, with articles of incorporation, authorization to receive stock subscriptions, minutes of the stockholders, Board of Directors and faculty meeting minutes, enrollment records, alumni mailing lists, and newsclippings (Accession 1999-001). As we mentioned a few weeks ago, we also just received a WUMD student matriculation register covering the period 1880-1912.

Mostly reports and letters to the Willamette Board of Trustees in Salem from Deans H Carpenter, O P S Plummer, E P Fraser, R Kelly
Not yet accessioned, some 70- 80 letters
Topics:
Financial matters, list of graduates [in some cases with final scores], requests for diplomas, notification of resignations and new chairs, some resignation letters, annual reports, reports of faculty meetings
Auditing committee report 1883
Browne letter of resignation
The Chair of Obstetrics situation
Commencement Program 1891
Transcript of June 15 1888 faculty meeting minutes sent to board – re: hospital privileges restoration
Transcript of May 25 1891 faculty meeting minutes sent to board – tribute to E P Fraser upon his resignation
S Josephi resignation letter as chair of Descriptive and Surgical Anatomy March 7, 1874
Annual Report 1874 from Carpenter to Board [including budget]
Annual Report July 21 1875 from Carpenter to Board [including budget]
Willamette University Department of Medicine Annual Announcement 1874-75
Annual Report June 1889 Plummer to Board [including budget]
Proceedings of Medical Faculty September 25 1880 to March 15 1881 Fraser report to Board

Fantastic! Many of these names undoubtedly look familiar to regular readers, and I for one am dying to see the dean's take on the "Chair of Obstetrics Situation", and how politic (or not) Simeon Josephi was in his letter of resignation in 1874.

When this collection is fully described, the finding aid will be available in the Northwest Digital Archives. Watch that space for more details!

Do you recognize these people?

Another day in this week of record-setting heat for Portland, and so to spare our own exhausted brains we will pick yours: do you know what group is depicted in the photograph included here? We don't. It has been filed in Portraits, Group: Unidentified. 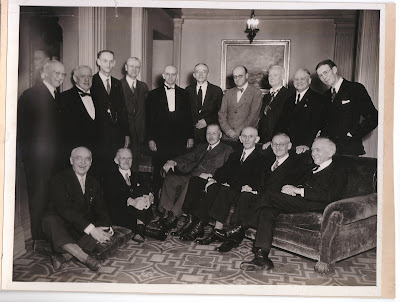 Some clues that might help you out: There is a small handwritten label on the back of the photo, noting that it was a "Gift from Mrs Andrew C. Smith (thru Dr Jones) May 1943". The mount itself is also rather unusual: a crudely cut section of a large poster board advertising Depression-era scrip issued by the City of Portland and Multnomah County. 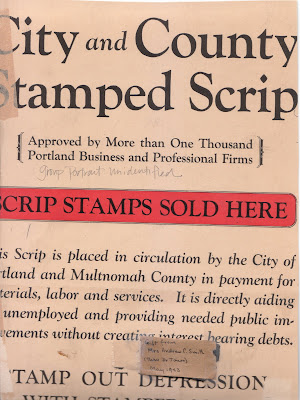 More clues: Andrew C. Smith, M.D. (1856-1943) was born in Richland County, WI, and moved to Portland in 1864. He received his M.D. from the Medical College of the Pacific (later Cooper, then Stanford) in 1882. He was the first president of the Oregon State Board of Health, first president of the Medical Arts Building Co. (1925-1928), a state senator (1901-03) and state representative (1916), and a professor of surgery at the University of Oregon Medical School. He was a member of the American Medical Association, the Oregon State Medical Society, Portland Academy of Medicine, Portland City and County Medical Society, and the North Pacific Surgical Association. In 1935, he was made an honorary member of the Pacific Coast Surgical Society (could this be that party?). He was also president of the Hibernia Bank of Portland.

As an aside, and probably not a clue to the group in the photo, A.C. Smith was best remembered for his development of the "necklace incision" for goiter surgery. Mrs. Smith was one Annie B. McDonald Smith, also of Portland.

Nice to see the casual old guys down front, sitting cross-legged on the floor. Given that touch, my first guess would be some Portland gathering--not quite Stanford style (Wisconsin, I'm not so familiar with...)
Posted by Sara Piasecki at 1:17 PM No comments:

Imagining the life of objects

If you're anywhere near the Willamette Valley, you'll agree when I say that it's too hot to think out there. Luckily, all the HC&A collection spaces are air-conditioned, and I was able to engage in a very stimulating discussion this morning with book artist and conservator-in-training Beth Robinson. We talked at length about the materials in the various collections, how they came to us, what they were used for, what they signify, what they reflect, how they might be reimagined (a la Fred Wilson).

We didn't have time to look at many items in depth, though, so here's one of my sentimental favorites from the book collections: this binding for a well-used copy of Warren's Household physician (1868) that has been lovingly sutured to make it last a little longer... thus keeping the boards on the spine leather, now torn completely in two, the whole having separated from the text block sometime well before this century. Even a portion of the original paper cover was carefully retained. An object both utile and reverenced. Lovely! 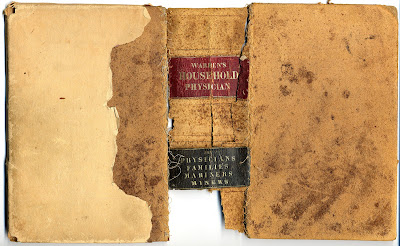 (Click for larger image)
Posted by Sara Piasecki at 2:29 PM No comments:

We were happily surprised yesterday by the arrival of an anonymous donation from some generous soul at the Santa Barbara Cottage Hospital: five notebooks, a pamphlet, and study cards belonging to George Horace Coshow, M.D. (1903-1989).

Coshow was a 1930 graduate of the University of Oregon Medical School, and these materials were all created or collected by Coshow during his school years. Three of the notebooks are entirely in manuscript, representing class notes from pathology, pharmacology, and (perhaps) physical examination courses. These Coshow signed with a bold hand, adding his address and affiliation with Alpha Kappa Kappa. Two other notebooks are typescript: "Notes on infant nutrition" from 1928, written by McKim Marriott and adapted by A.E. Gourdeau and L.H. Smith; and "Diseases of the cardio-vascular system, from the lectures of E.E. Osgood, 1928", with photographs (as shown here). 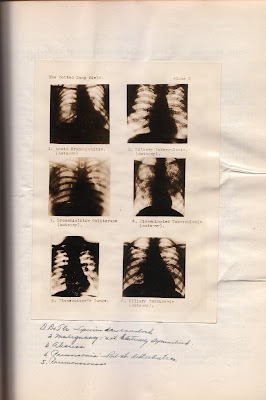 Also included is Coshow's heavily annotated copy of the "Form of Medical History and Physical Examination" in use at UOMS in 1928 and a set of flash cards created by Coshow as a study aid (also shown here). 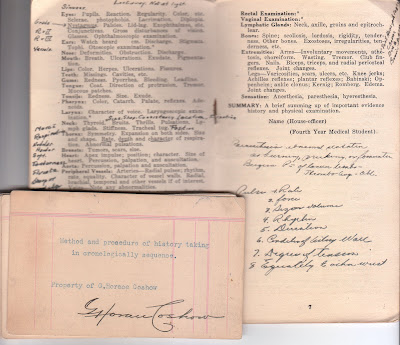 After graduation, Coshow relocated to California and apparently spent the remainder of his career in Carpinteria. He practiced at the Santa Barbara Cottage Hospital and was in part responsible for the establishment of its Reeves Library: we have a letter sent from Coshow to Bertha Hallam and Margaret Hughes in 1974 sharing his joy at the opening of the G. Horace Coshow, M.D., Room (see below). These materials were likely left in the hospital library at the time of Coshow's death in 1989. (As an interesting side note, the Carpinteria Valley Museum of History also has a room named after Coshow.) 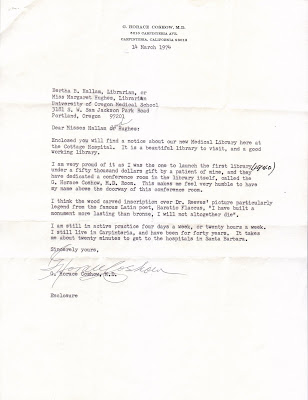 The arrival of this collection comes close on the heels of our recent post on Coshow's deposit of a small amount of information on Horace Carpenter, M.D.; we're positively delighted that the archives now holds materials that shed light on Coshow himself.

And if you're out there, anonymous donor, and would be willing to make yourself known to us, we'd love to send you a formal acknowledgement. You can contact us via phone, email, or snail mail at the numbers listed here.
Posted by Sara Piasecki at 8:01 AM 1 comment:

A volunteer here in HC&A is processing a sweet little collection of materials from the Xi Chapter of Alpha Epsilon Iota here at the University of Oregon Medical School (Accession 2004-023). AEI was a medical student sorority, first established in 1890, which spread across the country in the first half of the 20th century. In fact, a number of medical school archives hold collections that closely resemble ours: a small gathering of meeting minutes, a scrapbook, membership lists, correspondence, and ritual book (handwritten).

While small, the materials should be of interest to researchers interested in the history of the medical education of women in Oregon, and serve as a wonderful complement to the (newly renamed) Lucy I. Davis Phillips Collection on Oregon Women Medical School Graduates, Accession 2004-030. Indeed, the AEI collection contains information about some women graduates who did not appear in Lucy's index, including Dora Judson Underwood, M.D. (directory card below). 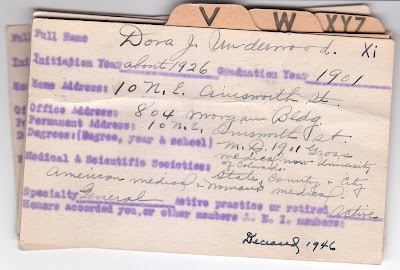 Last week, tantalizing new evidence was uncovered that suggests a different candidate for earliest female medical graduate in Oregon, with a date of 1868. Regular readers might recall that 1871 was the year of the blowup between the Willamette University Medical Department and student Mary Sawtelle. Stay tuned for more...
Posted by Sara Piasecki at 12:37 PM No comments: