Big Brother: Who is he? 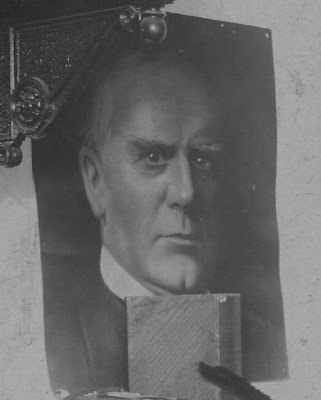 Who is Big Brother?

This question being, like so many others, relative, we here speak in the frame of reference defined by the borders of this photograph (below) of Portland health officer Esther Pohl Lovejoy, M.D., and market inspector Sarah A. Evans in Lovejoy's office in 1907. (You can download a larger version of this image from the OHSU Digital Resources Library here.) 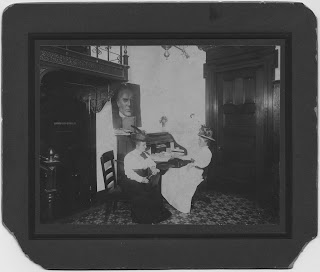 Not Portland Mayor Harry Lane. Not Oregon Gov. George Chamberlain. Could it be a thinner, more robust William McKinley than the one shown here?

While McKinley would have been six years in the ground when this photograph was taken, it is possible to imagine why Lovejoy would have kept this image on display. As a young lawyer, McKinley had earned a reputation as a friend of organized labor when he defended a group of striking miners. Lovejoy herself had developed a "labor consciousness" (according to scholar Kimberly Jensen) early in her life, and she may have been drawn to McKinley for this reason. It would seem a bit ironic, then, that McKinley was assassinated in 1901 by the anarchist Leon Czolgosz, a devotee of Emma Goldman, who was Lovejoy's exact contemporary and fellow suffragist.

If this is McKinley, what would that say about Lovejoy's choice of wall art? Was it a daily reminder to herself that social activism must work through the established rubric of law and order? Did it serve as a cautionary tale, that those who forget their roots are likely to die by the sword (to wildly mix metaphors)? Was it a pictorial urging to consider all points of view when making decisions that affect whole populations? Or had the city been too cheap to shell out for a new poster of Teddy Roosevelt?

They say a picture is worth a thousand words. Peanuts! I could go for pages on this one....
Posted by Sara Piasecki at 2:17 PM No comments: Links to this post

Under code and key, or, Help Wanted For Shorthand Decipherment

Well, another layer of mystery has been reached in the search for more information about the medical education of women in Oregon. We're hoping that someone out there might know some shorthand, and be willing to lend their expertise to this situation.

We have two volumes containing minutes from some of the meetings of the faculty of the Willamette University Medical Department (Accession 1999-001). In these minutes, the men discuss topics concerning the governance of the school, faculty disagreements, et cetera--the cetera including student performance. Some sections of the minutes covering the period June 18, 1878 - May 28, 1888 were recorded in shorthand.

Alas, we have no shorthand expertise in house. While it could be some runic language for all we know, it looks a little like Pitman shorthand. We include a segment here, with a bit of the secretary's longhand for comparison. If any kind souls out there are able to decipher this bit and would be willing to take a look at a few more sections, we would be thrilled to hear from you (comment here with your contact information, or email us at homref[at]ohsu.edu). 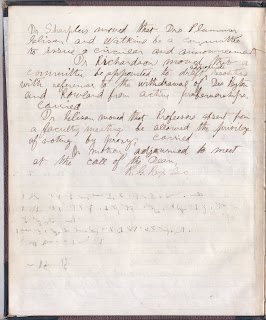 [Click on the image for a larger version]
Posted by Sara Piasecki at 1:03 PM No comments: Links to this post

Modern history, or, The digital flood begins with a trickle 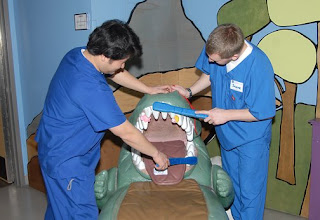 For the past few years, we've been bracing ourselves for the predicted influx of born-digital materials into the archives, and the trickle has started to grow.

Included in the SODAA haul are digital objects created between 2002 and 2009, including photographs from hooding [2009 shown below] and white coat ceremonies, dental and dental hygiene reunions, the annual Cantwell golf tourney, meetings, and special events such as Sealant Day and the Celebration of Smiles [students at the Celebration of Smiles in 2008 above]. Images of the dental school facilities, alumni board members, and faculty retirees are also there. A few videos made it into the mix, including ones of Ardon Overby, D.M.D., performing on stage. One audio CD contains a recording of Joe Consani, Sr., playing Christmas tunes on his violin.

One of the discs from 2007 already had several corrupted files on it. We cannot emphasize too strongly the need to REFRESH and MIGRATE your files frequently. 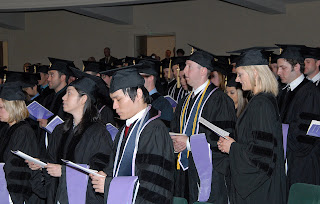 Posted by Sara Piasecki at 11:41 AM No comments: Links to this post

Be still my heart!

Another week, another visit, another fantastic item brought in by Charles Grossman, M.D.! Last week, Dr. Grossman donated his own portable EKG machine, a unit he found somewhat inferior to the model he had used as a resident in New Haven. This week, he brought us an example of that very model, generously donated to the collections by his friend Jack McAnulty, M.D. over at Legacy.

Dr. McAnulty (who is a bit younger than Dr. Grossman, and so not an original owner of this item) received this machine from Aubrey M. Davis, M.D. (1905-1994), Portland cardiologist and University of Oregon Medical School alumnus (Class of 1929). You'll see in the photos that, like Dr. Grossman's EKG, this one too has a personalized nameplate. The craftsmanship and quality are really breathtaking. The canvas cover is in beautiful condition, and there are two rolls of developed graphs in the accessories pocket (which is hidden by the fold in the lid when the instrument is opened). I can see the exhibit already! 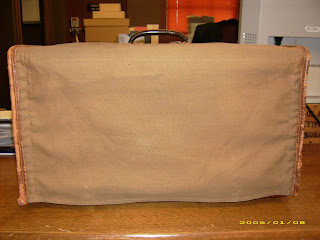 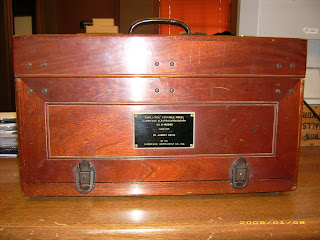 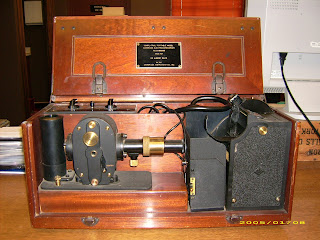 Posted by Sara Piasecki at 3:05 PM No comments: Links to this post

Still on the trail for information about Adalbert G. Bettman, MD, I had an excuse to bring down a few boxes from the collection of his papers (Accession 2001-013) here in the archives.

Tucked into a large scrapbook housed in Box 2 are four early photographs: two of young Adalbert, one of Adalbert with siblings Monte and Hugo (dressed as little Marine cadets!), and one of Adalbert's father's store in Eugene.

The journal Western States Jewish History published Robert Levinson's paraphrase of an oral history interview with A.G. Bettman in its October 1997 issue (30: 1); in it, we learn much about the lives of Goodman and Bertha Bettman during their time in Eugene (the family relocated to Portland in 1897), so it's neat to pair this image with that text. 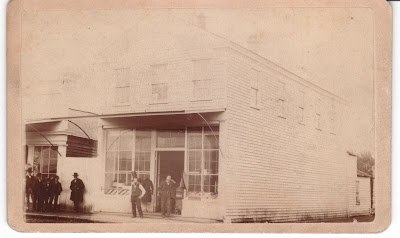 On the back of the photograph, an adult Adalbert wrote: "Abe Goldsmith & Goodman Bettman in front of the latter's store Eugene, Ore, S.W. cor[ner] 8 & Willamette St. A.G.B." and a paper label affixed to the photo reads: "G. Bettman. I.X.L. Store." (Click on the image for a larger version)
Posted by Sara Piasecki at 1:33 PM No comments: Links to this post