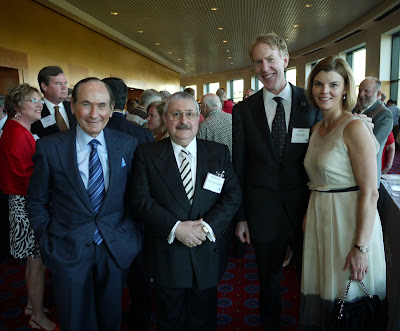 In the category of "History is what happens every day," we're happy to showcase a recent donation of materials from the fiftieth anniversary of organ transplantation at OHSU. The year-long celebration kicked off May 9, 2009, with the Heart Transplantation Celebration at the Oregon Convention Center. The event program, flyers, and menus were deposited in the archives, along with a wealth of digital photos from the party. Materials from additional celebrations will be deposited as the events unfold--an archivist's dream! Our thanks to Michelle Bechtholdt in Liver Transplantation for being so historically minded.

For those of you not attending the OHSU Commencement tonight--or, if you find Bas Vanderzalm's address a wee bit long and want an excuse to sneak out: Reading Frenzy is hosting a book launch party for "Local Museum Lady" Carye Bye, author of the new guidebook HIDDEN PORTLAND: Museums and Collections. There will also be a showing and sale of original illustrations from the book; the show will run through the end of the month.

Carye became interested in OHSU Historical Collections & Archives after stumbling across the School of Dentistry's display of dental anomalies on a visit to her dentist. She was kind enough to include us in her first compilation of small museums in Portland, a one-page trifold brochure which is now available on the Hidden Portland web site. After a recent tour of Marquam Hill art (a very long tour, because even I had underestimated how many great things there are to see here), Carye was sketching a preliminary design for the illustration that will accompany OHSU's write up in the guidebook. Be sure to check out the show--if not tonight, then sometime before the end of June--to see what image she found most iconic of OHSU's collections.

The full announcement for the book launch and show is below.

Carye Bye has three distinct creative identities in Portland: the artist and printer behind Red Bat Press, Bicycle Fun Advocate -- starting rides such as the Bunny on a Bike and Pretty Dress Bike Rides -- and Local Museum Lady (LML). As Carye Bye, LML she self-published a free brochure two years ago called "A Compendium of Small Museums & Obscure Collections" and led monthly Small Museums by Bike tours. Now she's starting a guidebook series called Hidden Portland. The first one is on the subject she knows best -- museums and collections.

Portland is home to many amazing but relatively unknown collections of art and artifacts and Bye wants both townies and tourists to have a chance to discover these obscure treasures. Collections such as the Museum of Dental Anomalies at the OHSU Dental School, the Portland Police Museum at the Justice Center (featuring a rapping McGruff Crime Dog from the late 70s!) or the Kidd's Toy Museum, tucked away in an unassuming gray office building off of SE Grand Avenue, which boasts a whopping collection of nearly 15,000 toys, are typically overlooked by conventional guidebooks. But even the bigger museums have their secrets too, such as an exhibit of preserved human fetuses in OMSI's Life Science Hall, or the 19th century plaster cast replicas of classic Greek sculptures, including the Venus de Milo, in the Mark Building Lobby at the Portland Art Museum.

As a printmaker, photographer and zine publisher, Carye has never had occasion or inclination to part with her original artwork. This show marks a departure for the artist as she will be exhibiting and selling the original watercolor & ink illustrations painted at each museum, as well as dozens of other small original works which will be replenished throughout the month. A limited edition, special debut release of Hidden Portland: The Museums will be available exclusively at Reading Frenzy.

This is the first show Bye has done with Reading Frenzy, but her relationship with the store dates back to 2002, when she started to sell her very first art postcards from Red Bat Press. A portion of the artist's proceeds will be donated to Reading Frenzy as a thank you for being a kick ass independent book and art shop, and one of the places that makes Portland such an awesome place to live and work as an artist.
The Show will run through June.

Flickr Photo Blog
http://www.flickr.com/photos/redbat/
Posted by Sara Piasecki at 7:59 AM

Closing the books on the Portland Academy of Medicine

Thanks to a generous donation from Stephen R. Jones, MD, the archives now holds the final records of the Portland Academy of Medicine.

The collection of Portland Academy of Medicine Records previously available in the OHSU Historical Collections & Archives (2004-019) was donated by longtime member A.G. Bettman, MD, sometime in the 1960s; that collection contains records covering the period from the Academy's inception in 1906 until 1961.

The materials donated by Dr. Jones cover the period 1986-1999, the final years of the group's existence. The collection includes the constitution and by-laws, meeting minutes, membership roster, nomination forms, and correspondence.

Most notable among the documents is a letter from Executive Secretary Barbara Gatrell, dated September 16, 1999, in which she details the process by which the Academy would be dissolved. It reads, in part:

Mitigating for graceful dissolution of the Academy at this point, founded November 6, 1906, are the following facts:

Due to death and attrition, the membership has dwindled to less than 50% of what it was in the early 1980's.

No new members have joined or been successfully recruited in more than 10 years. ...

The current generation of active members of the local medical community has decidedly expressed little or no interest in membership in, or offerings of, the Academy.

The Academy Council itself has exhausted itself of "new blood" in that every member is now a Past-President and the status of "officership" has been static since 1996.

While this was undoubtedly a sad outcome for those who remembered the Academy's heyday, it is nevertheless an extraordinarily telling event in the history of organized medicine in Portland, and we thank Dr. Jones sincerely for depositing these records with us.

If any one out there happens to have the PAM records for the period 1961-1986 sitting in their closet, we'd love to chat with you about the possibility of getting those into the archives as well...
Posted by Sara Piasecki at 8:32 AM 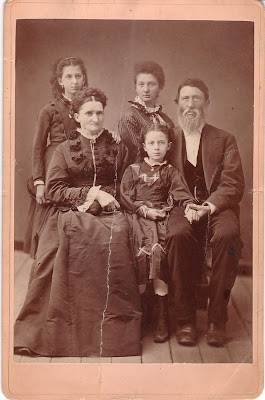 More reading on--or really "around" rather than "on"--l'affaire Sawtelle, the expulsion of a female student from Willamette University Medical Department in 1871, has inspired us to take a closer look at Horace Carpenter, M.D., a member of the faculty at WUMD during the crisis.

The bulk of the extant material pertaining to Carpenter in OHSU's historical collections was donated by his descendant, University of Oregon Medical School alumnus and medical historian G. Horace Coshow, M.D. Coshow deposited several original photographs from a family scrapbook, including the one shown here, with Carpenter, his wife Sarah, and their three daughters, Mae, Georgia, and Lilly. Original correspondence from Alfred Kinney, MD, and George H. Brodie, recounting their recollections of Carpenter, was collected by Coshow during his research into Carpenter's life and career (later published as a short biography in Northwest Medicine 1931; 30(8):378).

While we still find no smoking gun implicating Carpenter in Sawtelle's dismissal from WUMD, we find additional evidence--as if more were needed!--that the early faculty were often at one another's throats. Describing the early development of the school, Coshow writes:

Rivalries and jealousies developed the first year over the signatures which should appear on the diplomas of the graduating class. It appears that Dr. Carpenter objected to Dr. [Joseph Henry] Wythe's signature appearing on the diplomas, but whether as a professor in the school or as president of the University is not clear. Relations became strained and Dr. Wythe submitted his resignation as president, but the matter was adjusted and he remained for another year. Regardless of the fact that disagreements developed from time to time within the faculty and between the faculty and the Board of Trustees regarding Dr. Carpenter's ability, he must have been competent, for he was always retained or reinstated after the fires of battle died out...

In fact, an obituary for Carpenter (source unknown, the clipping coming from Coshow's scrapbook) discussed his surgical expertise, noting that he "successfully ligated a femoral artery an inch and a half below Powpart's ligament", and performed three successful trepanations--this all before 1893.

An article on Mary Sawtelle's experience at WUMD, written by Lavola Bakken for the Oregon Journal in 1971, concluded that since Carpenter had written Sawtelle a "warm letter of congratulation" years later, "'Flunking' Mary from Willamette could not have been his idea." However, Bakken also notes that when Carpenter did finally leave WUMD in 1875, "he took the department records with him." Alas, my archives for a records retention program!
Posted by Sara Piasecki at 12:32 PM 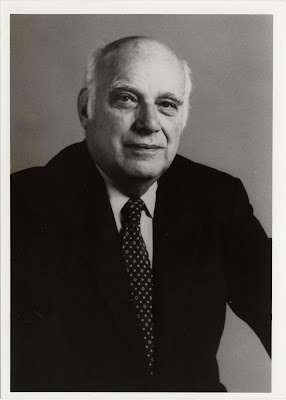 This morning's Oregonian has a short obituary of Dr. Edward E. Rosenbaum, MD, OHSU professor and chair emeritus of the Dept. of Rheumatology and nationally known author of A Taste of My Own Medicine, who passed away yesterday at the age of 94.

Part of one of Portland's most prominent medical families, Edward practiced medicine with his brother William, an internist; three of Edward's sons and two daughters-in-law became physicians, as did two of William's sons. Despite his close association with the profession, Edward was ultimately unstinting in his criticism of the modern practice of medicine. His book, which served as the basis of the screenplay for the film The Doctor, recounts Edward's experience as a patient with throat cancer--an experience that radically changed his perspective on what it takes to be a good physician.

Edward's impressive resume included fellowships at Michael Reese and the Mayo Clinic, military service in World War II with both a mobile surgical hospital and the Women's Army Corps, a long and distinguished academic career at OHSU as the state's first specialist in rheumatology, and a private practice that served all patients regardless of financial status (it has been widely reported that the Rosenbaum brothers often wrote off as much as $40,000 in bad debts annually).

Education and clinical experience alone could not teach Edward what his grandmother had known instinctively: "Doctors are great--as long as you don't need them." His turn in the role of patient provided Edward with insight into the perspectives of the ill, and it radically altered his own perception of the role of the physician. "I've switched sides," he declared. And we all--physicians and patients alike--are better off for it.
Posted by Sara Piasecki at 7:34 AM