I think most of us would agree that stories play a critical role in every society. From the time homo sapiens could string words together, people were telling stories. Even today, stories form much of the woof and weave of modern life. They bring us together; they tear us apart. They help explain; they help obfuscate (Ask any con man, and he'll confirm that even more important than the money you show is the story you tell).

So it is no wonder that we were sitting around here in Historical Collections & Archives yesterday, musing on stories we've been collecting. What is a bit wonderful is that, no sooner had a wish been expressed--"We need more stories from nurses"--than a woman wandered in, and told us a bit of her story.

She was "wandering around", she said, to see the Old Library, because she had just finished reading the Autobiography of John E. Weeks. She picked up a cheap, used copy at Powell's, drawn by the blue of the cover. She was delighted to discover that Dr. Weeks was connected with the medical school here, because she herself had worked at the Multnomah County Hospital for around twenty years. When she arrived in the 1960s, Emma Jones Hall was still a residence for nurses--she remembers that, she said, because the nurses used to sunbathe on the roof of Emma Jones, "and it was very distracting."

When we asked her if she had been a nurse, "Oh, no" she said; she had been a teacher, and took the course down at Monmouth. But then she took time off to have a family, and couldn't keep up with the changes in teacher education. So, when she applied at the county hospital, Mrs. Rankin said she'd do just fine, because of her obvious intelligence. She took the test, and got a 98 out of 100 questions. (She thought B.P. was probably bed pan, and that F.O.B. was maybe short for "father of baby". Turns out, it meant "foot of bed." Who knew F.O.B. had such a rich acronymic history?)

So, she became a nurse's aide. When we talked with her a little more about her duties, the subject of daily reports came up. We weren't sure, so we asked whether aides were expected to attend reports: "Oh, the nurses didn't like to take reports from aides, but sometimes they had to; they'd make faces and poke fun." When we commented on the irony of this, noting that nurses would often experience the same kind of disrespectful behavior from physicians, our visitor said "I hope so!"--but in a very good-natured way...

The encounter served to make us think more about the role of nurses' aides in health care in the early- to mid-20th century, the increasing professionalization of nursing, and the modern emphasis on team-based care. But it also made us think again about stories, which carry feeling as well as fact and often express truth in a way that data never will.
Posted by Sara Piasecki at 9:14 AM No comments: 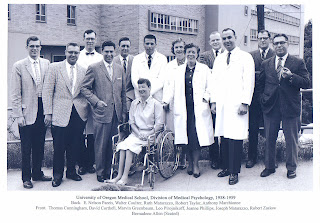 Today, we received from Drs. Arthur Wiens, Ph.D., and Ruth Matarazzo, Ph.D. (via the Office of the Provost), five binders of historical material on Internship and Residency Training in Clinical Psychology (1958-2002), a compendium of administrative information about the program in the OHSU Dept. of Medical Psychology (now Dept. of Behavioral Neuroscience) and biographical information about the trainees that came through the program during those 44 years.

From the "Introduction and Overview":

Volume I contains a listing of the Clinical Psychology Faculty within the Department who participated in the Internship and Residency Training programs. We have collected the most recent available curriculum vitae (CV) or professional resume of each faculty member...

Volume II [in two parts] presents an overview of the Interns in Medical Psychology, 1958-1985. A total of 105 interns were graduated from the program.

Volume III [in two parts] presents an overview of the Residents in Medical Psychology, 1958-2001. A total of 78 residents completed one or two years of Residency Training.

The most recent CV's and professional resumes illustrate the contributions that the Clinical Faculty, Interns, and Residents in the Department of Medical Psychology have made to health and education in Oregon, the United States, and in some cases internationally.

Volume I also includes group portraits of the department members, from 1958 to 1967. Additional images can be found in the Historical Image Collection. More information about the history of the department is available in the PNW Archives Collection, and in oral history interviews with Drs. Ruth and Joseph Matarazzo.

These new binders are headed over to cataloging, and will be available shortly in the PNW Archives Collection.
Posted by Sara Piasecki at 11:47 AM No comments:

For all those out there who think their last move was hard to coordinate, here is yet another example of why your parents and grandparents had it harder than you. No, they didn't have to walk three miles through the snow hauling boxes: they actually had to ask for permission. From The Man.

Our regular weekly donor, Dr. Charles Grossman, has again broadened our understanding of wartime America and the constraints faced by its citizens through his deposit of the following documents, which he needed to submit in order to relocate from New Haven, CT, to Vancouver, Washington, after his internship. (Click for larger images) 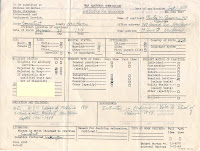 Posted by Sara Piasecki at 8:32 AM No comments: 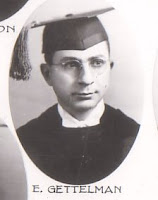 We were saddened to hear of the death last month of Eugene Gettelman, M.D., University of Oregon Medical School Class of 1933. His granddaughter, Elizabeth, graciously sent us a link to a wonderful obituary in the Jewish Journal of Los Angeles, and to the online guest book where family, friends, colleagues, and former patients have left their warm reminiscences.

For those who may be in the LA area: there will be a memorial service for Dr. Gettelman on Sunday, May 3rd at 2pm at Colen Conference Center, American Jewish University, 15600 Mulholland Dr., Bel-Air, CA.

Dr. Gettelman participated in the OHSU Oral History Program in 1999. The abstract of his interview is included below; the full transcript may be obtained in the OHSU Main Library or by contacting HC&A at homref@ohsu.edu.

I think that I'm proud of the fact that for many years I tried to be a doctor like the doctors that I saw in Portland. I'm disappointed now that I don't find any doctors like that anymore.

Dr. Eugene Gettelman jumps into his story about his years at the University of Oregon Medical School by describing the moment at which he knew he wanted to be a doctor: a fire had broken out at the University, and specimens, equipment—even cadavers—had been brought out into the street. Only seven or eight years old at the time of the fire, he carried that memory with him when he matriculated at the University in September of 1929.

Throughout his interview, Dr. Gettelman recalls in vivid and often hilarious detail professors, classes, and student life at UOMS in the 1930’s. We hear about Pop Allen’s research on neuroanatomy and about Hod Lewis’ instructional techniques; Laurence Selling’s unsurpassed skill in neurological examination; and Dr. Bilderback’s cadre of associates—one of whom was quite a practical joker.

Gettelman talks about the training students were given in physical diagnosis. He describes the old amphitheater in Mackenzie Hall, where crowds of students, residents, and visitors would argue over a patient with a particularly puzzling problem. He also discusses his experiences as a third- and fourth-year student at various hospitals and clinics in the area, including the police hospital in downtown Portland.

We also hear about students’ social life, such as it was. During the Depression and Prohibition, students made do with pure alcohol obtained from pharmacists and consumed at roadhouses.

Upon graduation, Dr. Gettelman served for a year as a physician in the Civilian Conservation Corps camp at Lake Quinault, Washington, before heading on to an internship and residency at Michael Reese Hospital in Chicago. We hear about the Jewish doctors that began arriving at Michael Reese, refugees from Nazi Germany. One of these doctors showed Gettelman an article about a new drug just introduced by Bayer & Company: Prontylin. Gettelman gives his eyewitness account of the first reported use of sulfanilamide in the United States, there at Michael Reese Hospital.

Finally, Dr. Gettelman briefly describes his term as a county physician in the slums of Chicago during the late 1930’s. He left Chicago at the start of World War II, and served two years in the South Pacific. Afterwards, he was stationed at the Marine Corps Air Base in Santa Barbara, and decided to remain in the area upon discharge. He subsequently spent many years in private practice in the San Fernando Valley.

Posted by Sara Piasecki at 1:57 PM No comments: 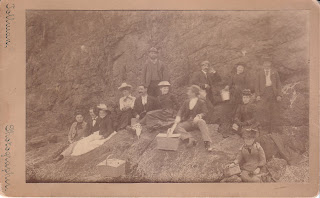 Portland, Oregon, is on track to flirt with today's record high temperature of 84 degrees Fahrenheit, and the sky is a crystal blue. No wonders we're all having a hard time concentrating on the work at hand.

So, instead, we offer this image of a picnic past, courtesy of the OHSU Historical Image Collection (click for larger image). The photo is included in the folder of images of Simeon E. Josephi, M.D., first dean of the medical school. A handwritten note on the back indicates that the photo was first given to "St. David's Parish Jan. 1966 by the Misses Louise and Virginia Thompson" (which sounds like something straight out of E.M. Forster). While he isn't positively identified on the piece itself, our guess is that Dr. Josephi is the hatless, mustachioed man with the white knotted cravat and umbrella. He kept the facial hair throughout his career:

Posted by Sara Piasecki at 2:39 PM No comments: