Women not welcome at Willamette, or, There's something about Mary

[Many thanks to Professor Kimberly Jensen, PhD, for bringing this interesting topic to our attention.]

During the period of time when we were actively involved with the recent local installation of the exhibit Changing the Face of Medicine: Celebrating America's Women Physicians, we often referred to the fact that women were accepted at Oregon schools from the very beginning of medical education in the state. Our exhibit text boasted:

Oregon joined the Union in 1859 and in 1864 voters selected Salem as its capital. Willamette University in Salem was founded in 1842, birthed from the work of Jason Lee's Methodist mission. It was one of the earliest coeducational institutions in the United States, and its first graduate was a woman. The Medical Department was established at Willamette in 1867, and started offering classes that year. Women were attending the Medical Department as early as 1877. By 1880, the population of Salem was a fraction of that of Portland, with a mere 2,500 inhabitants.

After two or three unsuccessful attempts at establishing a medical college in Portland, it wasn't until the organization of the University of Oregon Medical School in 1887, that medical education finally took a foothold. Willamette University Department of Medicine subsequently merged with UOMS in 1913.

The 1882-1883 catalog of the Oregon Medical College, a short-lived attempt to establish medical education in Portland, states that women had always been admitted to the medical departments both in Salem and Portland

Recognizing the equal rights of both sexes to the highest educational advantages, the Board of Trustees, a few years since, made provision for the education of women, and that are now admitted to this as to all departments of the University on the same conditions that are required of men."

Now, some documents have come to light which cast doubt on the equal acceptance of females at the medical department of Willamette University.

Mary Priscilla Avery Sawtelle (1835-1894) was admitted to the Willamette Medical Department in 1869. According to a chapter on Sawtelle in Jean M. Ward and Elaine A. Maveety's Pacific Northwest Women, 1815-1925: lives, memories, and writings (1995), Sawtelle"passed all her courses except for Anatomy. Although she appealed and was given an opportunity to retake the exam, Sawtelle believed she would be failed again, simply because she was a woman." She decided to transfer to the Women's Medical College of New York, where she received her degree in 1872.

Ranking high among those who received diplomas last evening, is Mary P. Sawtelle, of Salem, Oregon. This lady, animated with a desire to better qualify herself for work in the cause of the true advancement of her sex, entered the Medical College in her native town, she encountering much opposition from those who considered the institution sacred to "men." Here she faithfully pursued her studies during the allotted term and passed a creditable examination at the close. But although acknowledged by the faculty to be in advance of many of the students who graduated, she could not receive a diploma, "because", as one of the professors said to her, "you are a woman." [emphasis in original]

Hmm, interesting. One source, presumably Sawtelle herself, admits that she did not pass the anatomy examination; the other glosses over this fact and asserts that she was one of the best students then enrolled. Let it be said that without a sound knowledge of anatomy, no practitioner could have made it out of even the least demanding 19th century regular medical school.

So, what really happened here? Was Mary denied a degree based on her gender? Was she subjected to so much discrimination that she was unable to effectively complete her studies? Or was she a sub-par student who was set back by the Willamette professors? The New York college she subsequently attended was a homeopathic school, which might have placed more emphasis on clinical skills rather than the basic sciences (such as anatomy). Did Mary just not show the proper Methodist spirit (another important element in being accepted at WUMD)?

If Mary was denied on the basis of her sex, what changed between 1869 or 1870 and 1877, when not one but two women were graduated from WUMD? Until more evidence comes to light, we can only speculate. Any readers out there knowing more about Mary--or other women who might have been turned away from the medical school--are encouraged to contact us at homref@ohsu.edu.
Posted by Sara Piasecki at 1:26 PM 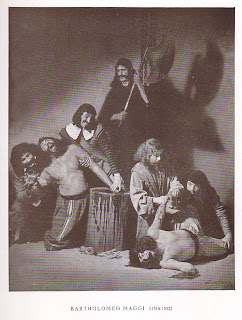 Collection assessment at offsite storage has provided us with an opportunity to revisit the medically themed work of Lejaren à Hiller (aka Lejaren A. Hiller, Sr.), the American photographer known for elaborately staged scenes, dramatic lighting, and liberal retouching. Just exactly the sort of approach one would want for illustrations of surgery, right?

At least, that's what the firm of David & Geck, makers of surgical sutures, thought when they set out to create an advertising campaign in the late 1920s. In 1944, the images created by Hiller for Davis & Geck were collected in Surgery through the Ages: a pictorial chronical [sic]. The company had wanted "a master in the field of pictorial illustration, one capable of grasping the significance of the subject, capable of handling the many epochs covered with a combination of drama and technical mastery." Drama, they definitely got.

You may question the firm's judgment, but I really question the publisher's assertions in the "Note" prefacing the 1944 book. It begins:

Curiously, surgery has always been neglected in the pictorial arts.

Has it? Let's leave aside Rembrandt as being too obvious. But what about Eakins' Gross Clinic? What about Seligmann's iconic image of Billroth? What about any of the surgical lampoons by Rowlandson? A glance at the catalog of prints and drawings in the Clements C. Fry Collection in the Harvey Cushing/John Hay Whitney Medical Library at Yale University, or a search for "surgery" in the Wellcome Library's database of historical images provides us with numerous artistic representations of surgeries, created prior to 1944. And I don't think we should discount the long line of of talented artist-surgeons who illustrated their own works with stunning images worthy of museum display.

And what about the theory that some surgery is, itself, art?

Many people express amazement, after hearing that we work in a medical archives, that we can stand to look at photographs of medical procedures--especially ones involving the eye, say, or dermatologic diseases. I, however, find Hiller's work to contain some of the most garishly graphic images in the library. They were probably wicked fun to pose for, though...
Posted by Sara Piasecki at 12:06 PM

Sorry about the pen...

A while back, we posted a letter from Charles Grossman, M.D., to the White House, in which Dr. Grossman shared some of his thoughts on how the administration could improve its public relations. At that time, I noted that there was no response from the White House included in the packet of correspondence.

Well, this week, Dr. Grossman brought us the letter of response, personally signed by Special Assistant to the President Lawrence F. O'Brien (the response letter had gotten misfiled into a packet labeled "honeydew"--but that's another story). Larry seems to have concluded that Dr. Grossman was irritated at not having received one of the presidential bill-signing pens: 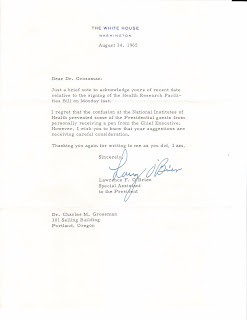 Ah, written communication has ever been an imperfect art....
Posted by Sara Piasecki at 8:58 AM

A wonderful donation of seventeen books, courtesy of former OHSU School of Nursing faculty member Wilma Peterson, has brought several nursing classics into the historical collections--along with some colorful commentary.

In addition to important titles such as Amy Frances Brown's Research in nursing (1958) and the paired reports Abstract for Action (1970) and From Abstract Into Action (1973) edited by Jerome Lysaught, the donation contained a copy of Blanche Pfefferkorn and Marian Rottman's Clinical education in nursing (1932). The previous owner, SON faculty member Lucile Gregerson, jotted her critique of the book, and its author, on the front flyleaf: 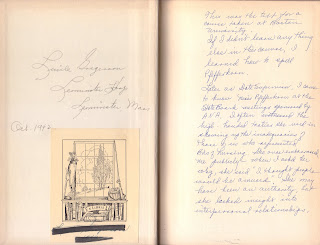 Lucile also extra-illustrated her copy of Margaret Bridgman's Collegiate education for nursing (1953) with a photograph of herself with the author and SON faculty members Eleanor Palmquist and Olive Slocum: 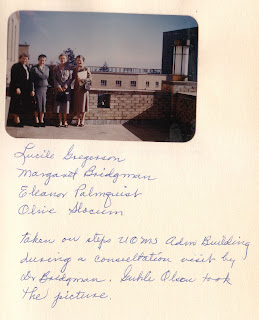 A complete list of the titles donated by Wilma Peterson is below. Once through cataloging, they will be available to researchers through the OHSU Library. Enjoy!

Schmahl, Jane A. Experiment in change: an interdisciplinary approach to the integration of psychiatric content in baccalaureate nursing education. New York, Macmillan 1966.

Bixler, Roy W. Administration for nursing education in a period of transition, by Roy W Bixler and Genevieve Bixler. New York, Putnam, 1954. Signature of Effie Swenson.
Posted by Sara Piasecki at 9:05 AM