Bibliographies as measures of excellence, or, HOW much is that Jaboulay in the window??

I've been thinking a bit about excellence lately, particularly medical excellence. What it is, how to measure it. If it can't be defined, can it still be taught. Inspired by recent discussions at the Collegium for the Study of the Spirit of Medicine, I've been thinking about exemplars and heroes, and how bad boys often wind up being sanitized into role models (think disrespectful young Vesalius, convention-bucking Semmelweis), and the good boys achieve mythic status (think infallible Osler).

Simultaneously, I've been pouring over the various editions of the standard bibliography of classics in medicine, now in its fifth edition and called Morton's medical bibliography. I am startled when I run across a name from OHSU's own history: R.C. Coffey, M.P. Judkins, A. Starr. These individuals seem so real to me that the elevation to near-legend status conveyed by inclusion in such a revered reference work jars my sensibilities.

Much contemporary thinking about medical excellence involves things like "quality assurance", superior physician-patient communication, commitment to ethics. All laudable goals, indeed. But are they synonymous with excellence, or necessary for excellence? What of those deemed excellent by history? Surely, history shall be the judge, right? That's what historians like to think. "Standing the test of time." Almost medieval in its need for the individual to die before the test can be read.

Take R.C. Coffey. He was notoriously difficult to get along with (and was shut out of the medical establishment here in Portland), he was hounded by animal rights activists for his work with dogs, and I doubt his patients liked him much either. But he was an excellent surgeon, a dedicated researcher, a good friend and colleague (to some), and he made a real and lasting contribution to medicine.

Are the definitions of excellence in clinical care different from those in medical research? If so, what to say about clinician-researchers, and the renewed emphasis on bench-to-bedside studies?

I dare say we may not be able to extract a useful summary of qualities appertaining to physicians from the 1991 edition of Morton's medical bibliography: under Medical Ethics, no works later 1900 appear on the list....
Posted by Sara Piasecki at 11:24 AM No comments:

It's a day for a picture that will make us smile, and this fits the bill: the very tall Howard P. Lewis, MD, chair of the University of Oregon Medical School Dept. of Medicine and 1930 graduate of UOMS, with toddler. Courtesy Imprint (Spring 1966). Enjoy!

Posted by Sara Piasecki at 11:36 AM No comments:

NSI Library: The rest of the story 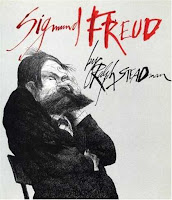 Just over a year ago, the library at the OHSU Neurological Sciences Institute closed and the Main Library (in the person of yours truly) was invited to come in and select some materials for the circulating collections. All of the volumes selected for retention have now been cataloged and processed, and the final tally is in: 267 monographic volumes added.

All titles are included in the OHSU Library catalog. A full list of NSI adds can be obtained by sending a request to homref[at]ohsu.edu.
Posted by Sara Piasecki at 9:36 AM No comments: 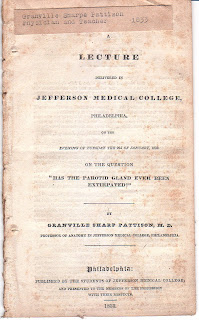 Yesterday, we received a donation of four volumes from Dr. Susan Tolle, Director of OHSU's Center for Ethics in Health Care. The smallest and most interesting of these is a little pamphlet entitled A lecture delivered in Jefferson Medical College, Philadelphia, on the evening of Tuesday the 22d of January, 1833, on the question "Has the parotid gland ever been extirpated?" by Granville Sharp Pattison.

I know, you're saying to yourself, "Wow! That does sound interesting!" Indeed, for those who specialize in the salivary glands, this may be a fascinating treatment of the subject. For those who do not, look no further than the author for some delicious gossip and rumor.

The most popular biography of Pattison available today was written by his great-great nephew, F.L.M. Pattison--but the biographer felt no need to don kid gloves in his treatment. Granville was by all accounts a scoundrel: a duelist, brawler, and (probable) resurrectionist, an unethical researcher and incompetent teacher, a man who awarded himself an M.D. This pamphlet was produced near the beginning of his ten-year tenure at Jefferson Medical College, before the school managed to shed him in 1841. A history of Philadelphia published in 1884 (33 years after Granville's death) called him simply a "medical celebrity". I get the feeling that wasn't a compliment....
Posted by Sara Piasecki at 12:26 PM No comments: 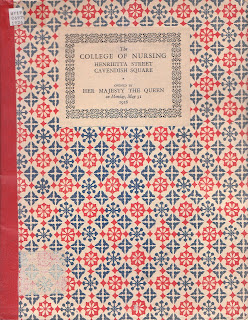 Another passel of rare and medium-rare items from the circulating collection in the OHSU Library's offsite storage recently made the grade for transfer to the historical collections. More than twenty-five titles were pulled and relocated to the History of Medicine, History of Dentistry, or Pacific Northwest Archives collections, including the following:

The College of Nursing and Cowdray Club.
London (Henrietta Street, Cavendish Square); The College and Club, [192-]
(Shown here). Originally called the Nation's Nurses and Professional Women's Club, Ltd., the Cowdray Club was established in 1922. Annie Pearson, the first Viscountess Cowdray, was a great supporter of both the Club and the College of Nursing, and had purchased 20 Cavendish Square as a "social club" for nurses. The OHSU copy is one of only two shown in OCLC's WorldCat.

Goodrich, Annie Warburton, b. 1866. The social and ethical significance of nursing; a series of addresses, by Annie Warburton Goodrich ...
New York, The Macmillan Company, 1932.
OHSU copy has label with author's signature affixed to half-title.
Dean of the Yale University School of Nursing from 1923 to 1934, Goodrich had established the United States Student Nurse Reserve (Army School of Nursing) in 1918. This is one of the earliest titles in nursing ethics currently held by OHSU.

Frost, Roland A. Practice dentistry and make a profit / by Roland A. Frost.
Portland, Ore. : Binfords & Mort, c1939.
One of only eight copies listed in WorldCat of this local title.

Rademaker, G. G. J. (Gijsbertus Godefriedus Johannes), 1887-1957. Das Stehen; statische Reaktionen, Gleichgewichtsreaktionen und Muskeltonus, unter besonderer Berücksichtigung ihres Vergaktens bei kleinhirnlosen Tieren.
Berlin, Springer, 1931.
"In 1924, using his considerable surgical skill, [Rademaker] set out to study the long term survival of animals following total removal of the cerebellum, and later, of animals from whom he had removed both cerebral hemispheres. There resulted the remarkable monograph Das Stehen, primarily an analysis of cerebellar deficit, but with much wider significance in relation to the neurological mechanisms of righting, standing and equilibrium. The original monograph is a mine of carefully documented information defining precisely the part played by the many cutaneous, proprioceptive and labyrinthine reactions that are the fundamental features of regulation of posture and equilibrium. That the cerebellum is not in fact an essential part of the mechanism of any of the labyrinthine reactions was an extraordinary finding" (Denny-Brown in his Preface to the recent English translation--The Physiology of Standing--of Das Stehen, pp. v-vi).
Posted by Sara Piasecki at 9:28 AM No comments: