"Grace and comradeship"; "Profound gratefulness": two more in the can

[You know, I still like that phrase, "in the can", for film. Of course, digital film doesn't come in cans, but we'll pretend as long as we're able to, until kids lose all mental imagery of film reeling.]

Two very successful oral histories were captured yesterday, as planned--despite the dusting of snow on Marquam Hill! Below are short impressions/precis(es); stay tuned for complete transcripts to follow soon.


"Grace and comradeship"
Pam Hellings, RN, PhD, CNP-P, talked about her early desire to go into health care, after babysitting a young boy with cerebral palsy. Her BA from UCLA was just the beginning, and Pam soon found herself one of the pioneers of advanced practice nursing. She was recruited to Oregon by Kathy Burns, another UCLA graduate, who had written a successful grant to establish a nurse practitioner program here at OHSU. Kathy lacked a master's degree, and so was not eligible to lead the program; Pam fit the bill, having earned both a master's degree and a PNP certificate at UCLA. She came because "there was lots of room to make a difference in Oregon"--and she definitely has. Oregon's program became a model for the nation, and Pam was asked to testify before other state's legislatures on developing rules and regulations for nurse practitioner practice.

An administrator within the OHSU School of Nursing for many years, Pam talked about her role in moving the school forward and shared anecdotes about the deans and directors under which she served, including Jean Boyle, Carol Lindeman, and Kate Potempa. She described her work in establishing the Breastfeeding Program and on the Nursing Faculty Practice Grant. Her role as a several-term senator on the Faculty Senate gave her unique insight into the financial challenges the university faced. How did they get through it? "Grace and comradeship," qualities fostered by then-Dean Carol Lindeman.

"Profound gratefulness"
In the afternoon, Cecille Beyl, MD, shared some anecdotes from her remarkable life in medicine. From the story of her mother, middle child of 13 born to Russian Orthodox Jewish immigrants in New York, who went on to surmount inconceivable odds to become a physician; to Cecille's childhood in New York and her early work on the stage (playing Virgin Mary in the school play, without irony); to her schooling and entrance into medicine, Cecille professed a sense of "profound gratefulness" for the good fortune of her life. Her lifelong love of learning was not only verbally expressed, it was nearly palpable: since retiring, Cecille has taken two masters degrees in languages and literature and continues to attend classes at Portland State.

Her tenure in pediatric cardiology at OHSU coincided with a period when Oregon was a leader in cardiac research (Dotter, Judkins, Starr, Edwards, et alii), and she herself contributed to that success. But she hasn't limited herself to medicine, and we heard about her first climb (Mt. Adams, straight out of the gate!) and about what she might have been if she had it to do all over again (a folksinger). Her final advice to anyone starting out in medicine: "Believe in yourself."

Today will be spent capturing two more interviews for the OHSU Oral History Program and, in a first (at least since I started here), both interviews will be of women and conducted by women.

First up, Barbara Gaines will be speaking with Pamela J. Hellings, RN, PhD, CPNP-R, professor emerita of nurse-midwifery at the OHSU School of Nursing. Dr. Hellings received her master's degree in child-psychiatric nursing from UCLA in 1971 and her doctorate in educational psychology from the University of Oregon in 1984. Hellings began her career at OHSU in 1975 as project director of the PNP Training Program. She quickly moved up the ladder, serving as Acting Chair of the Dept. of Family Nursing in 1983-1984 before being named to the post in 1985. Since stepping down as chair in 1989, Hellings has served as director of the Breastfeeding Program, director of Practice Plans and Privileges, and project director for several grants. In 2006, she was a visiting professor at Mahidol University Faculty of Nursing in Thailand. She has twice won the president's award from NAPNAP and was named Oregon PNP of the Year in 1986.

In the afternoon, Sima Desai will interview Cecille O. Sunderland Beyl, M.D., professor emerita of pediatric cardiology at the OHSU School of Medicine. Dr. Beyl received her undergraduate degree at American International College in Springfield, MA, before enrolling at the State University of New York College of Medicine. Graduating in 1962, she went on to an internship and residency in pediatrics at SUNY Upstate. In 1968, she came to Portland as a fellow in pediatric cardiology at the University of Oregon Medical School. She joined the faculty in 1970, and in 1983 was named director of the division of Pediatric Cardiology. She has received both the Allan J. Hill and Joseph B. Bilderback teaching awards, and the Chime Subcommittee Award for Humanism in Medicine. The daughter of a female physician, Dr. Beyl is very interested in issues and challenges faced by women in medicine.
Posted by Sara Piasecki at 7:00 AM No comments: Links to this post

This is shocking news that cannot wait, since the closure is due to begin this Saturday. Researchers needing to access OHS collections before then should make plans immediately.

Due to budget cuts, the Oregon Historical Society Research Library will be closing on February 28, 2009. After that date, collections will no longer be available to the public. At this point, photo and film reproduction orders will still be taken.

If you'd like to make your voice heard, you can send your questions or comments to George Vogt, Executive Director of OHS, at george.vogt[at]ohs.org or 503-306-5203. Check the website at for any future news about the status of the library.
Posted by Sara Piasecki at 1:34 PM 3 comments: Links to this post

Black Panther medical and dental clinics: a bit of the story

A good bit of the answer to that question has now, happily, been provided by the Winter 2009 (88:1) issue of Reed magazine. Included is an article by Martha Gies (author of Up All Night) titled "Radical Treatment", which outlines the history of the Black Panther medical and dental clinics in Portland, and, as you would expect, the role Reedies played in their establishment.

And you don't even need to read through my keen analysis of the article, since it's freely available online. What a bonus! And it's only Tuesday.
Posted by Sara Piasecki at 1:47 PM 3 comments: Links to this post

We're thrilled to be able to report that scanning is now complete, to the tune of 440 files for volume 1 and 495 files for volume two, not including the index pages for both volumes (also done). Since many of the pages were already nearly unreadable, digital capture has come not a moment too soon (see some examples below). It's actually quite stunning how much more one can see on the digital surrogate than on a standard photocopy (which was the technology available to this project at its inception in 2003).

Who was Alexander Donald Mackenzie? We still don't know a lot about him. We know that he matriculated at the University of Oregon Medical School in 1891, at which time his residence was listed as Portland. He graduated in 1894 (which makes him a classmate of Esther Pohl Lovejoy of much greater fame) and he was granted a license to practice in Oregon in 1895. He was appointed clinical lecturer at UOMS in 1902, and served as secretary for both the Portland City and County Medical Society and the Oregon State Medical Society. We know (or think we know) he died in 1907, but the 1907 issues of Northwest Medicine don't contain an obituary for him. If any of you readers out there know more about the "Little Mackenzie", we'd love to hear from you.

Take your time. His letters will be waiting. 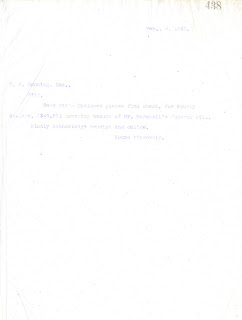 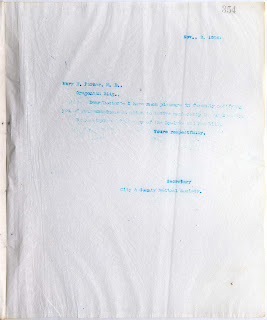 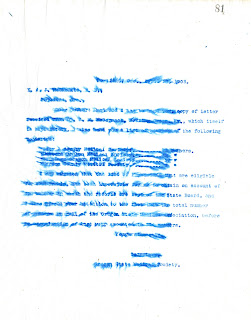 Posted by Sara Piasecki at 1:55 PM No comments: Links to this post